Home Keep Up U.S. Elections Election Fraud is an Issue That Will Not Go Away 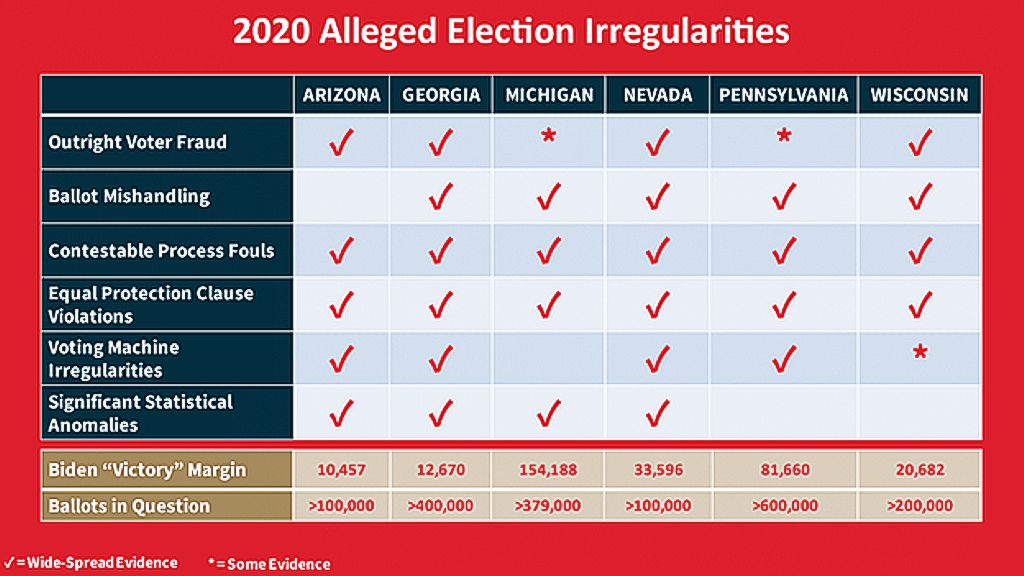 There are many reasons to doubt the 2020 election results. No question, strange things were happening on election night. Democrats’ push for universal mail-in balloting made fraud much easier to commit. There is evidence of massive foreign cyber interference as well. The media says there is nothing to see here, but we cannot move on from November 3 until we fully understand what happened.

Voting fraud has been going on for many years and has not been confronted in any meaningful way. The Democrats’ playbook for a long time has been to steal elections. This time it was on a grand scale. Ironically, had Trump won his second term, election fraud would continue endlessly into the future with little comment.

Arizona is nearing the completion of a full forensic audit, and lawmakers from other states are traveling there to see how it is done. The issue is reaching critical mass. Election integrity is finally getting the attention it deserves, and the truth of the 2020 election is going to come out.

In his report, Peter Navarro provides abundant evidence that the Presidential election results resulted from widespread fraud, ballot stuffing, and other election irregularities.

Navarro claims the Democrat grand strategy was to dramatically increase absentee and mail-in ballots while dramatically decreasing ballot verification in battleground states. The goal was to tip the election to Biden with a flood of illegal votes. Molly Ball confirms this strategy in her infamous TIME Magazine article.

Trump received millions of more votes in 2020 than in 2016, and Republicans swept most congressional and down-ballot offices. It is simply not believable that Biden somehow won the election honestly.

Trump won bell-weather Ohio, which no winning president has failed to carry in that state’s history, by a more considerable margin than he did in 2016. Pennsylvania was trending the same on election night until they mysteriously stopped counting votes late in the evening. Moreover, Philadelphia blocked access to Republican poll watchers on election day — despite a U.S. Supreme Court order — to investigate the irregularity. Similar fraudulent actions occurred in Maricopa County, Atlanta, Las Vegas, Detroit, and Milwaukee.

And then there is the cyber fraud. Against all odds, a private citizen, Mike Lindell, is exposing the cyber election fraud in his friendly Midwestern way. He has a new social media site that cannot be de-platformed by Big Tech. He has done his homework on foreign cyber interference in the election.

Yes, Lindell is that guy who was a gambling and crack addict and is now a born-again Christian. He believes God will deliver him on his divine appointment. He is fearless, and there is nothing Joe Scarborough or Rachel Maddow can do to stop him. The more the big-box stores ban his MyPillow products, the more the deplorables step up their online purchases directly from the company. The spectacle of Lindell’s approach brings much attention to his message and the scale of the cyber fraud in the 2020 election.

Lindell estimates close to 3000 cyber attacks occurred from around the world on Nov. 3-4. He has identified 20 attacks alone where Trump votes were flipped for Biden votes and were enough to change the election outcome. Notice the timestamp, source, and target IP address, and the number of Trump votes flipped to Biden. This evidence demonstrates irrefutable foreign

interference in our election. The evidence is hard proof that cannot be changed or altered, or explained away.

Lindell has filed a court case and insists Biden will be removed from office after a 9-0 Supreme Court decision on his case, but that remains to be seen.

Both Navarro’s ground fraud and Lindell’s cyber fraud were enough to swing the election independently. Together, there is overwhelming evidence that the election was stolen.

So now, further evidence is being uncovered ballot by ballot in a laborious forensic audit in Arizona. The audits will find corroborating documentation to help frame the questions that need to be asked as we go forward with this process.

The 2020 election saw an unusual influx of private funds into local election offices, which then decided to ignore state laws regarding election integrity. Where are the ballot transfer forms documenting the chain of custody of Fulton County, Georgia, on ballots placed in neighborhood drop boxes? How were millions of dollars from Facebook used by local election offices, and did it give preference to one candidate over the other? Why did state officials make a deal with a voting machine contractor that doesn’t allow them to obtain data and computer code on the machines essential for a forensic audit?

To have confidence in the 2020 election, these questions and more will need to be answered. Government officials dodging questions makes us question the election even more. If there is nothing to hide, why are Democrats putting up huge money for criminal defense attorneys for election issues?

Maricopa County, Arizona, is nearing completion of its full forensic audit, and Georgia is about to begin theirs. There are rumblings that Pennsylvania, Michigan, Wisconsin, and other states will soon do the same.

The U.S. Senate may look quite different after the audits are complete. We may find David Perdue and Kelly Loeffler from Georgia should be seated in the U.S. Senate and Martha McSally from Arizona, and John James from Michigan.

The 2020 Election fraud is one of the most egregious crimes in history. Much detailed preparation went into stealing this election across all states. It was planned well in advance to be sprung on election day to put Biden over the top, and it will soon be fully exposed.

We all know elections matter. Well, stolen elections matter even more. And a groundswell is brewing on the right. These folks were once called the Silent Majority, but now they’re suddenly not so silent anymore. When the left invalidated the people’s votes with all their cheating, they also lost the people’s consent to be governed by them. People are ticked off and have had it with the lies of the left and are not going to take it anymore.