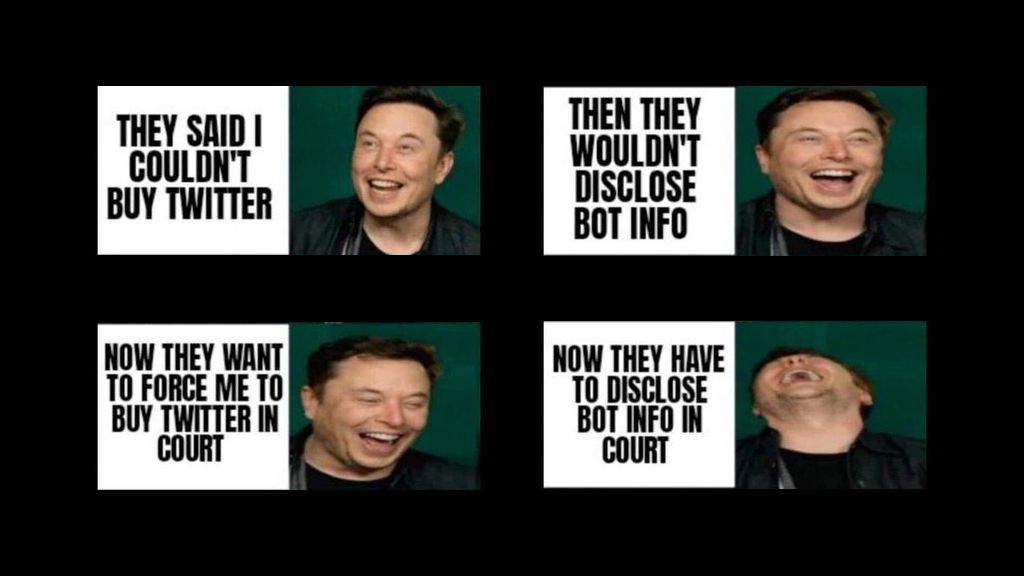 Billionaire tech mogul Elon Musk reacted with a series of memes to Twitter’s preparations to sue him in a bid to force him to buy the social media platform for $44 billion.

In a late-night Twitter post on Sunday, Musk shared a meme featuring with images of himself laughing, along with captions that marked several key developments in his buyout bid saga.

He has since moved to void his deal with Twitter’s board, issuing a formal filing with the U.S. Securities and Exchange Commission (pdf) that claims there are too many bots and automated accounts on the platform.

Twitter has fired back, saying it would try to enforce the deal and possibly hit Musk with a lawsuit.

Bret Taylor, chairman of Twitter, said in a social media post on July 8 that Twitter plans to sue Musk in the Delaware Court of Chancery to force him to follow through with the deal.

There has been media speculation that a filing could come as soon as early this week.

Back in April, Musk bought a significant amount of Twitter’s shares, triggering speculation that he would enforce changes to the company’s content moderation policies.

Musk has repeatedly taken aim at Twitter, arguing it has a left-wing bias and targets conservative accounts.

Former President Donald Trump reacted to Musk’s filing that seeks to pull out of the $44 billion deal to buy Twitter, saying he believed the move was inevitable.

Trump, who himself owns the Truth Social platform, told Breitbart News, “I knew that Twitter had a lot of the fake accounts because I read, like everyone else does.”

“I thought that the price was exorbitant,” Trump added, referring to the $44 billion price tag Musk committed to in the agreement with the Twitter board.