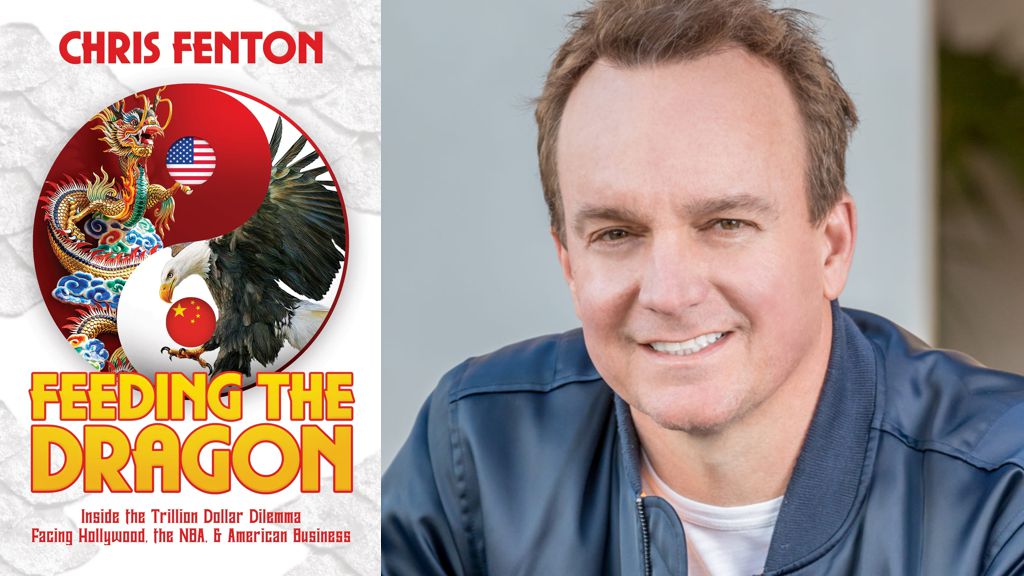 Feeding the Dragon is a deeply revealing memoir of big wins and hard lessons from a seasoned executive caught smack in the middle of the trillion-dollar soft power struggle pitting China against Hollywood, the NBA, and American business.

“A must read right now, as tensions unbelievably continue to escalate between the US and China.” – Jason Kelly, Bloomberg

“More chilling and cynical is a point Fenton makes a little later: “Even worse, the price of crossing the culture gap in the wrong direction can be catastrophic…” – Washington Post

“The book is a whirlwind autobiography in the mold of “The Education of Henry Adams,” one in which a life’s events provide an opportunity to reckon with a world that is changing rapidly if not necessarily for the better.” – Ryan McDonald, Easy Reader News

“Interesting thing about Chris’s book is his ability to give us a peak inside the (Chinese censorship) system. To Chris’s credit, it’s obvious he grapples with what that means, given the power granted (by Hollywood) to the censors.” – James Tager, PEN America

“Thank heavens you wrote this book. This is a book that should’ve been out a long time ago.” – Tucker Carlson, Tucker Carlson Tonight

“If you are interested in Hollywood and China and all the big $$$, read “Feeding the Dragon”.” – Greta Van Susteren

“Have to say that it is entertaining, informative, and eye-opening. Highly recommend!” – Anthony Pompliano, The Pomp Podcast

“You should read Chris Fenton’s “Feeding the Dragon.” Fenton is more sympathetic to the Chinese than I am, but he had a first-person view on how the CCP works and how they influence Hollywood films.” – Sonny Bunch, The Bulwark

“Feeding the Dragon” is riveting. Fenton is a great storyteller who also has great stories to tell. Part memoir, part policy prescription.” – Emily Jashinsky, The Federalist

“This book is going to be a blockbuster. I guarantee you.” – War Room Pandemic

“As studios clamor to squeeze every red cent from a film, the process has created a Hollywood culture of self-censoring best described in the new book “Feeding the Dragon” by Hollywood producer Chris Fenton.” – The Washington Times

“Fenton’s book is a personal look at events from 2000 to 2014, a critical period for Beijing’s growing leverage over Hollywood studios.” – Mark Magnier, South China Morning Post

“Chris was a fantastic guest, and he didn’t even cover a fraction of the stories in his great new book. Get yourself a copy!” – China Unscripted / China Uncensored Show

“Fenton knows the topic better than anyone… the precarious relationship between Hollywood and China.” – Neal Pollack, Book & Film Globe

“Paced like a thriller, with comparable doses of international intrigue and conflict, Chris Fenton’s bracingly candid business memoir Feeding the Dragon takes readers deep behind the scenes of Hollywood’s shaky foothold in China. Dealing at the highest levels with Chinese government officials and major American brands like Disney, Marvel, and the NBA, the former Olive Garden waiter-turned-entertainment-industry-power-broker disarmed and defied authorities on both sides of the superpower divide to make billions–and history.” – Jamie Bryan, Fast Company

Self-reflection is an extremely powerful force. When I started writing, I felt passionate as a voice of dissent. By the end, I learned I was also complicit. Though my thoughts have altered, my mission has remained steady: we either continue to coexist through the bond formed by the exchange of culture and commerce, or we consciously start a cold war between the world’s two superpowers.

An October 2019 tweet supporting Hong Kong protestors from the Houston Rockets’ GM alarmed Americans to China’s soft power influence and its rapid intensification. However, China started spreading its wings long ago, and it has no intention of stopping. When did the Sleeping Giant transform into such a formidable Dragon? Are the NBA, Hollywood, and American businesses complicit in feeding this beast? If so, can they stop? And should they stop? What is at stake globally?

And how did a meandering college graduate go from Olive Garden waiter to William Morris talent agent to humble protagonist stuck right in the middle of such a controversial geopolitical story?

Feeding the Dragon covers all that and more in a roller-coaster ride of personal reportage with historic reverberations.

For seventeen years, Chris Fenton served as president of DMG Entertainment Motion Picture Group and GM of DMG North America, internationally orchestrating the creative and business activities of DMG–a multi-billion dollar global media company headquartered in Beijing. He has produced or supervised twenty-one films, grossing $2 billion in worldwide box-office. As an author, Fenton chronicled much of that work in FEEDING THE DRAGON: Inside the Trillion Dollar Dilemma Facing Hollywood, the NBA, & American Business.

At present, he speaks regularly as a China expert and serves as CEO of Media Capital Technologies, having concluded a successful term as Senior Advisor to IDW Media Holdings focused on streamlining operations, expanding international business, and restructuring investments. Fenton also hosts US Congressional member delegations on diplomatic missions to China focused on trade, media, and investment. He is a Trustee of the US-Asia Institute, Advisor to the Canadian Trade Commissioner, and board member for several companies. Fenton, a contributor for RealClearPolitics, South China Morning Post, OUTKICK / Fox Sports, The Federalist, C-Suite Quarterly, Bleeding Cool, and The Wrap, regularly appears on Bloomberg, Tucker Carlson, Fox Business, BBC, CNBC, Fox Sports, Adam Carolla, Steve Bannon, and VOA.

Fenton, who holds a BS in Engineering from Cornell University, resides with his wife and two children in Manhattan Beach, CA.