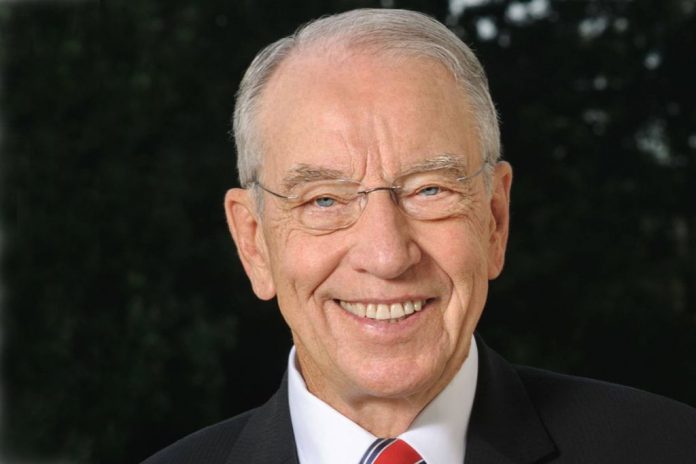 WASHINGTON – Two Senate chairmen want to know whether the Justice Department has acquired information from Ukrainian prosecutors that may contradict the stated reasoning behind former Vice President Joe Biden’s threat to withhold U.S. assistance from Ukraine. They are also renewing an inquiry into the department’s response to reported efforts by Ukrainians, in coordination with Democratic Party associates, to acquire damaging information on Donald Trump during his 2016 presidential campaign. In a letter to Attorney General William Barr, Finance Committee Chairman Chuck Grassley (R-Iowa) and Homeland Security and Governmental Affairs Committee Chairman Ron Johnson (R-Wis.) are seeking additional information about the department’s review of the Russia investigation’s origins, including the DNC’s reported work with Ukraine to undermine candidate Trump.

“Ukrainian efforts, abetted by a U.S. political party, to interfere in the 2016 election should not be ignored. Such allegations of corruption deserve due scrutiny, and the American people have a right to know when foreign forces attempt to undermine our democratic processes,” the Senators wrote in the letter.

The letter follows a July, 2017, inquiry from Grassley to the department referencing reports that a DNC consultant coordinated with the Ukrainian government to acquire opposition research on Trump during his 2016 presidential campaign. According to a Politico investigation, “Ukrainian government officials tried to help Hillary Clinton and undermine Trump” and “helped Clinton’s allies research damaging information on Trump and his advisers…” Though media reports indicate that U.S. Attorney John Durham is investigating whether Ukraine played a role in the counterintelligence probe during the 2016 election, the Justice Department has yet to confirm whether it has begun an investigation into coordination between the Ukrainian government and individuals associated with the campaign of Hillary Clinton or the Democratic National Committee.

Separately, a report yesterday revealed new documents that call into question the stated reasons behind a 2016 ultimatum by then Vice-President Biden to fire a Ukrainian prosecutor who had investigated a company for which Biden’s son was a board member. According to the report, Ukrainian officials have tried to forward documents related to the matter to the department, to no avail. Grassley and Johnson are requesting details on any actions the department is taking to review the material referenced in the report.

Full text of the Grassley-Johnson letter to Barr follows:

We write to follow up on Senator Grassley’s July 20, 2017 letter, which highlighted brazen efforts by the Democratic National Committee and Hillary Clinton campaign to use the government of Ukraine for the express purpose of finding negative information on then-candidate Trump in order to undermine his campaign.[1] That letter also highlighted news reports that, during the 2016 presidential election, “Ukrainian government officials tried to help Hillary Clinton and undermine Trump” and did so by “disseminat[ing] documents implicating a top Trump aide in corruption and suggest[ing] they were investigating the matter[.]”[2] Ukrainian officials also reportedly “helped Clinton’s allies research damaging information on Trump and his advisers.”[3]

At the center of this plan was Alexandra Chalupa, described by reports as a Ukrainian-American operative “who was consulting for the Democratic National Committee” and who reportedly met with Ukrainian officials during the presidential election for the express purpose of exposing alleged ties between then-candidate Donald Trump, Paul Manafort, and Russia.[4] Politico also reported on a Financial Times story that quoted a Ukrainian legislator, Serhiy Leschenko, as saying that Trump’s candidacy caused “Kiev’s wider political leadership to do something they would never have attempted before: intervene, however indirectly, in a U.S. election.”[5]

The July 20, 2017 letter further noted that the Democratic National Committee encouraged Chalupa to work with Ukrainian embassy staff to “arrange an interview in which Poroshenko [the president of Ukraine] might discuss Manafort’s ties to Yanukovych.”[6] In March 2016, Chalupa met with Valeriy Chaly, Ukraine’s ambassador to the U.S., and Oksana Shulyar, a top aid to the Ukrainian ambassador, to share her alleged concerns about Manafort. Reports state that the purpose of that initial meeting was to “organize a June reception at the embassy to promote Ukraine.” However, another Ukrainian embassy official, Andrii Telizhenko, told Politico that Shulyar instructed him to assist Chalupa with research to connect Trump, Manafort, and the Russians. He reportedly said, “[t]hey were coordinating an investigation with the Hillary team on Paul Manafort with Alexandra Chalupa” and that “Oksana [Shulyar] was keeping it all quiet…the embassy worked very closely with” Chalupa.[7] In a May 2019 article, Telizhenko was quoted as saying,

[Chalupa] said the DNC wanted to collect evidence that Trump, his organization and Manafort were Russian assets, working to hurt the U.S. and working with [Russian President Vladimir] Putin against the U.S. interests. She indicated if we could find the evidence they would introduce it in Congress in September and try to build a case that Trump should be removed from the ballot, from the election.[8]

Reportedly, Telizhenko was instructed by the Ukrainian government to meet with an American journalist about Paul Manafort’s ties to Ukraine.[9] In addition, in May 2016, Chalupa emailed a DNC official stating that she met with 68 Ukrainian investigative journalists about Manafort and that there would be “[a] lot more coming down the pipe.”[10] Less than a month later, the “black ledger” identifying payments made to Manafort from Ukrainian politicians was announced in Ukraine.[11] And finally, Nellie Ohr, the wife of Justice Department official Bruce Ohr, stated during a congressional interview that Fusion GPS used Serhiy Leschenko, a Ukrainian politician that admitted Ukraine intervened in the 2016 election, as a source for derogatory material against then-candidate Trump.[12]

After two years, more than 2,800 subpoenas, approximately 500 search warrants and witness interviews, and $30 million in taxpayer money, Robert Mueller reported that then-candidate Trump did not collude with the Russians or any other foreign government to interfere with the 2016 presidential election.[13] In contrast, however, the Clinton campaign and Democratic National Committee hired Fusion GPS to conduct opposition research against candidate Trump, which included, among other efforts, the hiring of former British Intelligence Officer Christopher Steele to compile the “Steele Dossier” that reportedly used Russian government sources for information. These facts continue to raise concerns about foreign assistance in the 2016 election that have not been thoroughly addressed.

According to the Justice Department, U.S. Attorney John Durham is “exploring the extent to which…Ukraine, played a role in the counterintelligence investigation” during the 2016 election.[14] However, the Justice Department has yet to inform Congress and the public whether it has begun an investigation into links and coordination between the Ukrainian government and individuals associated with the campaign of Hillary Clinton or the Democratic National Committee. Ukrainian efforts, abetted by a U.S. political party, to interfere in the 2016 election should not be ignored. Such allegations of corruption deserve due scrutiny, and the American people have a right to know when foreign forces attempt to undermine our democratic processes. Accordingly, please provide an answer to two questions from the July 2017 letter related to the Democrats’ collusion with Ukrainian officials:

Are you investigating links and coordination between the Ukrainian government and individuals associated with the campaign of Hillary Clinton or the Democratic National Committee? If not, why not?

Why hasn’t the Justice Department required Alexandra Chalupa to register as a foreign agent under FARA?

In addition, information has surfaced that raises new questions. A recent report described a note purporting to memorialize a meeting in Kiev between the Ukrainian Acting Prosecutor General, Yuriy Sevruk, and Burisma’s American legal team.[15] Yuriy Sevruk was the temporary replacement for the Prosecutor General that Vice President Biden demanded be fired, Viktor Shokin. The note, reportedly written by Sevruk, states that “[t]he purpose of their visit was an apology for dissemination of false information by U.S. representatives and public figures on the activities of the Prosecutor General’s Office of Ukraine [Shokin] in regards to the investigation of criminal activities of Zlochevsky [Oligarch owner of Burisma Holdings].”[16]

The article also reports that Ukrainian prosecutors have unsuccessfully been trying to get information to Justice Department officials since the summer of 2018, possibly including “[h]undreds of pages of never-released memos and documents … [that] conflict with Biden’s narrative”[17] that his actions in Ukraine had nothing to do with his son’s connections to Burisma. In light of this reporting, has the Justice Department obtained or been offered documents from Ukrainian officials related to these matters? If so, what were those documents?

We respectfully request that you respond to all of these questions no later than October 14, 2019.