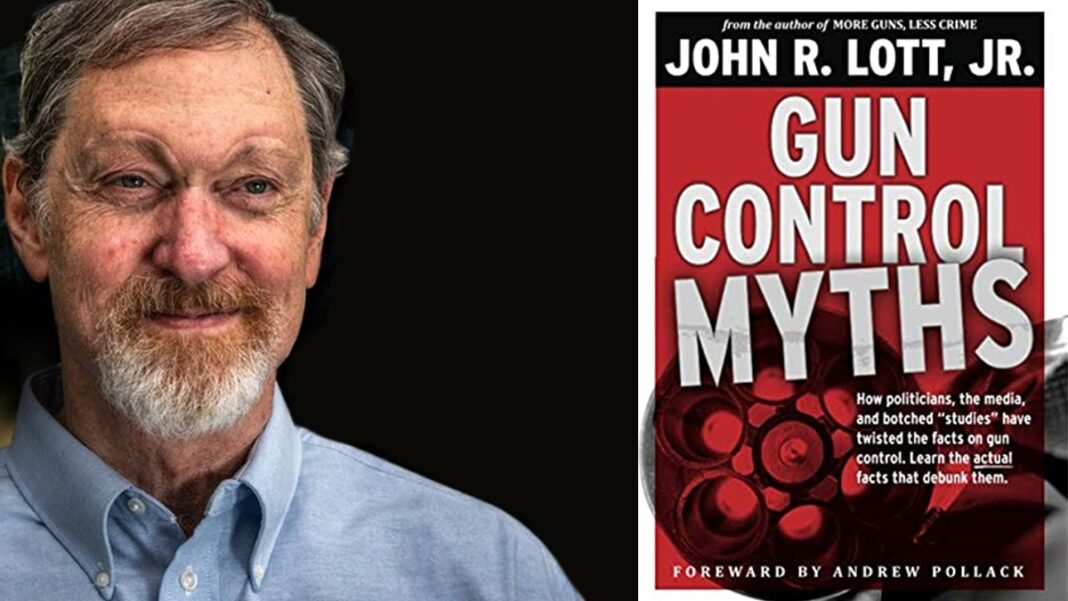 John Lott blows away one false myth about gun ownership after another. As Andrew Pollack’s Foreword notes; “Learn the actual facts that debunk them.” From myths about mass public shootings to suicides to gun ownership rates and crime to gun free zones, Lott addresses the claims you frequently hear in the media and explains what is wrong with those claims.

“John Lott has been giving us the facts about guns for decades. Finally clear to all that one party in America has an anti-Second Amendment platform and wants to disarm you. Now you need to arm yourself with the Truth. Buy and read Gun Control Myths today. Before it’s too late.” ~ Sebastian Gorka Ph.D., host of AMERICAN First, former Strategist to President Trump

“John Lott shows that the media and many politicians are biased against guns. For example, many stories are written in the media about shooters, but very few about defensive uses of guns. Similarly, he shows that some gun control policies are actually counterproductive. Shooters seek out gun-free zones. If we banned “assault” weapons, shooters might shift to larger hunting guns. The book is copiously footnoted. It is full of statistical and graphical analysis, so that his points are easily grasped and persuasive. Anyone who advocates gun control and does not seriously consider John’s work is negligent. Any journalist who does not at least consider John’s work is committing journalistic malpractice.” ~ Paul H. Rubin, Dobbs Professor of Economics Emeritus, Emory University

“We have John Lott to thank for once again providing factual and empirical based research to counter the anti gun movement’s well funded and organized campaign based on nothing more than slogans, myths and propaganda designed to demonize supporters of our cherished Second Amendment right to keep and bear arms.” ~ David Clarke Sheriff (RET) Milwaukee County

Dr. John R. Lott, Jr. is an economist and a world-recognized expert on guns and crime.  He is the Founder of Crime Prevention Research Center (CPRC). During the Trump administration, he served as the Senior Advisor for Research and Statistics in the Office of Justice Programs and then the Office of Legal Policy in the U.S. Department of Justice. Lott has held research or teaching positions at various academic institutions including the University of Chicago, Yale University, the Wharton School of the University of Pennsylvania, Stanford University, UCLA, and Rice University, and was the chief economist at the United States Sentencing Commission during 1988-1989. He holds a Ph.D. in economics from UCLA.

Lott is a prolific author for both academic and popular publications. He has published over 100 articles in peer-reviewed academic journals and written ten books, including “More Guns, Less Crime,” “The Bias Against Guns,” and “Freedomnomics.” His most recent books are “Dumbing Down the Courts: How politics keeps the smartest judges off the bench” and “Gun Control Myths.”

He has been one of the most productive and cited economists in the world (from 1969 to 2000 he ranked 26th worldwide in terms of quality-adjusted total academic journal output, 4th in terms of total research output, and 86th in terms of citations). Among economics, business, and law professors his research is currently the 15th most downloaded in the world. He is also a frequent writer of op-eds.

Lott can be reached at johnrlott@crimeresearch.org.