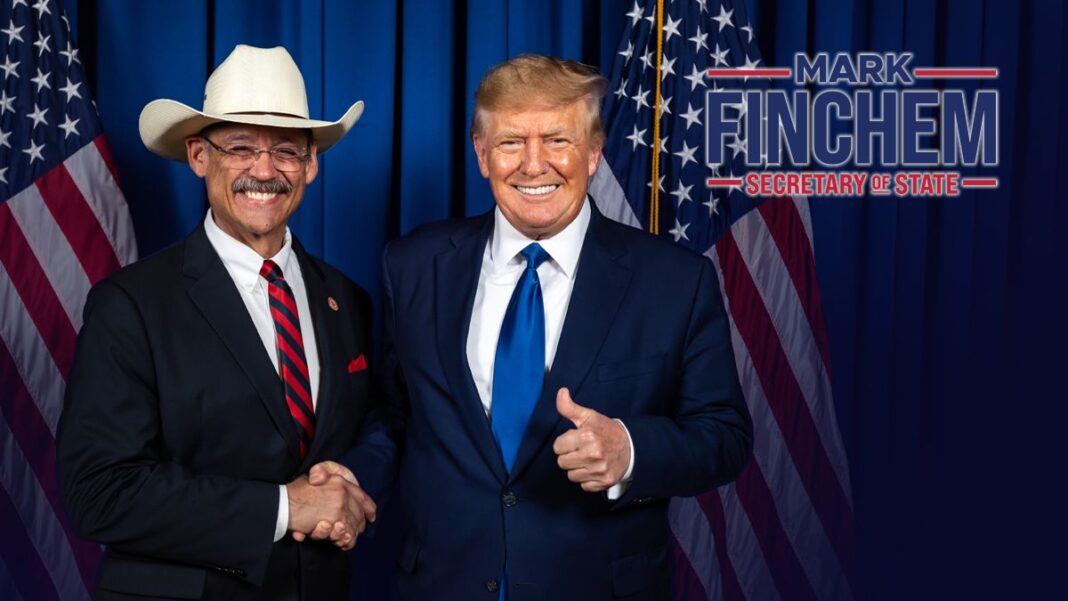 It was a hot political debate, for sure, but the heat was clearly on Arizona state Rep. Mark Finchem, the Trump-endorsed Republican nominee for secretary of state on Sept. 20.

The “Big Lie” of the stolen 2020 election and Jan. 6 were Arizona Horizon host Ted Simons’ big questions for Finchem during the half-hour long segment.

“Do you think Arizona voters want their chief election officer at a riot at the U.S. Capitol to overthrow an election?” Simons asked Finchem in a solemn tone. “Is that what you think Arizona resident voter citizens want?”

Simons was referring to Finchem’s attendance at the Jan. 6 protest at the U.S. Capitol in Washington last year.

Finchem, who admitted to being interviewed by the Department of Justice and the Jan. 6 Committee, shot back, “The last I checked, [being] where something is happening is not illegal. I have been treated as a witness, not as a suspect.”

In the Hot Seat

For the next 26 minutes, nearly every question would be directed at Finchem.

It would be fair to say Finchem is not popular in the legacy media. A quick Google search revealed headlines alluding to his alleged conspiracy theories about a stolen 2020 election.

One reads, “Arizona GOP secretary of state nominee stands by election conspiracy.” Another points to his alleged “fealty to the Big Lie.”

It would also be fair to say the proverbial gloves will remain off as Finchem and his Democratic opponent, Adrian Fontes, duke it out in the run-up to the Nov. 8 general election in Arizona.

By his own remarks, Fontes is no fan of Finchem in the race for Arizona’s top election administrator, charactering Finchem’s views about the 2020 election as nothing less than “dangerous.”

Fontes said during the debate that the race is not only about preserving mail-in ballot voting in Arizona; it is about defending democracy from threats posed by “the far-right.”

Fontes, an attorney, cited Finchem’s attendance at the Jan. 6 protest as hard proof of his political extremism.

“What [Finchem] did was engage in a violent insurrection” resulting in the deaths of police officers, Fontes said, without mention to the protesters that died. “He is part of an organization that has called for the violent overthrow of this country,” he repeated from claims made by voices in the legacy media that the Trump team is fighting to challenge.

Finchem upheld his record as a criminal justice investigator and two-term Arizona state representative who is running for secretary of state with the slogan, “Just follow the law.”

In his view, Fontes, a former Maricopa County Recorder from 2017 to 2021, created his own election law for political reasons while serving in that position by printing illegal ballots.