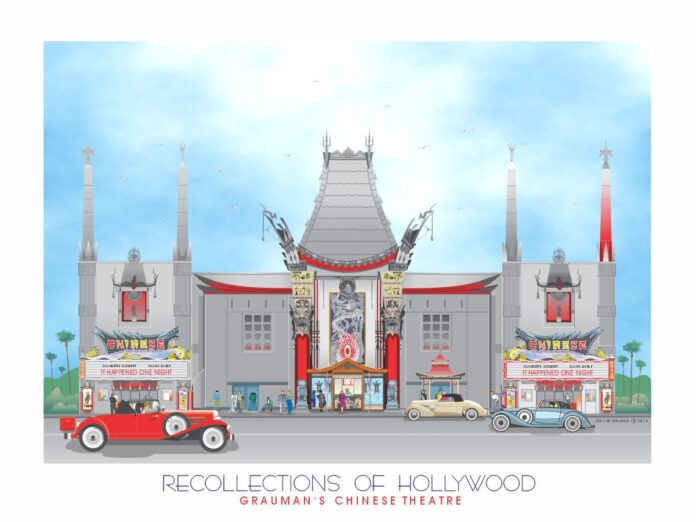 Thousands of people from around the world visit Hollywood, CA everyday. Old Hollywood has lost much of its charm, and its glory days have long since passed. In an effort to share Hollywood’s glorious past with their visitors, Grauman’s Chinese has presented, in the theater gallery, Recollections of Hollywood by artist Jim Van Schaack. Van Schaack has drawn the old haunts of Hollywood, as they were in their prime. His “Recollections of Hollywood” series includes drawings of Grauman’s Chinese Theatre, both during the day and at night, along with drawings of Grauman’s Egyptian Theatre, the Earl Carroll Theatre, Charlie Chaplin Studios, Paramount Studios, Capitol Records Building, The Hollywood Bowl, the Beverly Hills Hotel, and the Hollywood Palladium.

Jim Van Schaack‘s drawings of Grauman’s Chinese Theatre have the original mask in incredible detail, along with the marquees that announced many great movies and the stars that graced the silver screen.

There was a time when you could see a mural of some of the greatest recording artists in history on the side of the Capitol Records building. Today, the mural has faded to almost nothing. Van Schaack has brought the mural back to life in glorious color in his drawing.

Many of these wonderful buildings are now crammed between other buildings, making them almost invisible. In his drawings, the individual buildings are the center of attention as they deserve to be.

The “Recollections of Hollywood” artist was born in the late 1920s and raised in Los Angeles. When the Invisible Man, with Claude Raines, came out in 1933, it was Jim’s first movie experience and he just had to know how the invisible man disappeared. Thus began Jim’s fascination with the movies.

Lucky enough to grow up in Los Angeles during the heyday of Hollywood, he was able to spend countless hours watching movies being made on the streets of L. A., in Griffith Park, where many western type movies were shot, and around the studios where you could see the action. He also had several childhood friends who were actors.

In grade school Jim had a young boy in his class who had been acting in motion pictures since he was three. The boys name was Scotty Becket, (Our Gang) and they became good friends. Because he was under contract to a studio, Scotty had to leave public school and he was not able to return until the two were finishing school at Los Angeles High. They continued their friendship, until Jim went in the U. S. Army.

In 1937, Jim spent a semester of school staying with friends in the heart of Hollywood. He spent all his free time visiting the now famous sights of tinseltown. In the classroom next to Jim’s was a curly haired girl named Shirley Temple. Her stay at public school was cut short by a threat to her life and she left. Down the street from where Jim was staying, lived another friend. His name was Billy Barty. He was four years older than Jim, but appeared to be much younger because he was a midget. Billy had been a well known actor since he was very young.

In 1943 Jim was working as an usher at Bard’s Theater in south west Los Angeles. Bard’s Theater not only played movies, but also had a live stage show with a band and other entertainment. One evening a familiar face came into the theater, it was Alfalfa (Carl Switzer) from Our Gang. Carl had recently been released from his contract with the studio and was, for the first time in his young life, without much to do. Carl and Jim became friends until Carl reorganized his life and got back to work.

In those days the whole town was a movie location. As the years passed, age took its toll on Hollywood. One landmark after another quietly disappeared. Jim decided to produce a series of digital drawings, a detailed picture, of each remaining landmark, showing it, when possible, as it appeared in its prime. Since beginning the project, he also created drawings of additional landmarks outside of Hollywood, but in the Los Angeles area. These drawings include buildings that have completely disappeared.

Jim Van Schaack is also a noted American Designer and creator of major department stores and shopping centers throughout the United States. His designs have won numerous awards, but more importantly his innovation in design has helped change the the face of store planning and made a much more pleasant shopping experience for all of us.