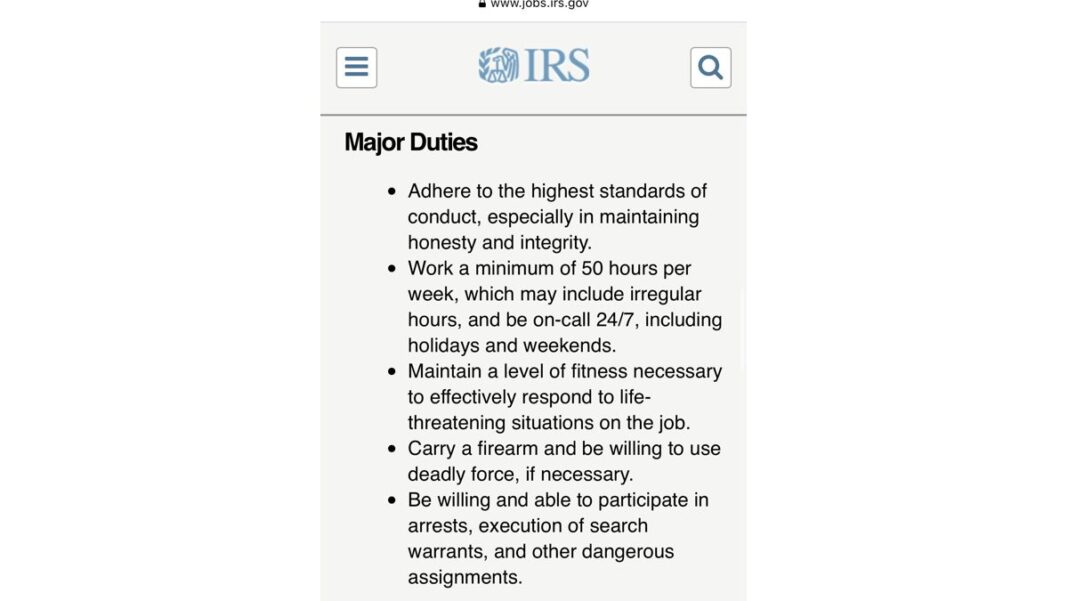 IRS job posting said agents must be willing to ‘carry a firearm’ and ‘use deadly force, if necessary’

An online job posting for special agents within the law enforcement branch of the Internal Revenue Service (IRS) is causing a stir on social media, as Congress prepares to pass a spending bill that would greatly expand the federal agency.

A link to a job posting for “Criminal Investigation Special Agents” appeared to have been briefly deleted on Wednesday, following online criticism of the posting’s language, though it reappeared back online after a FOX Business inquiry to the agency.

A “key requirement” for applicants is that they have to be “legally allowed to carry a firearm,” and “major duties” include “Carry a firearm and be willing to use deadly force, if necessary” and “Be willing and able to participate in arrests, execution of search warrants, and other dangerous assignments,” according to the job posting.

The requirement that agents be willing to use “deadly force, if necessary” drew heated criticism online, although the same language appears in job postings for other law enforcement agencies, such as the FBI.

“The IRS Criminal Investigation special agent job announcement continues to be open on USAJobs and has not/was not taken down. USAJobs is where these positions are posted and where applicants are referred to in order to apply,” an IRS spokesperson told FOX Business.

The uproar over the post coincided with criticism of the proposed expansion of the IRS under the Inflation Reduction Act, which includes an $80 billion boost to the IRS over a 10-year period, with more than half intended to help the agency crack down on tax evasion.

Requirements include working min “50 hours per week, which may include irregular hours, and be on-call 24/7, including holidays and weekends” and “Carry a firearm and be willing to use deadly force, if necessary.”https://t.co/uvwbrAkIit pic.twitter.com/z0aVX6uoMr

If passed, the money would go toward filling 87,000 IRS positions, more than doubling the agency’s current size. The bill passed in the Senate on Sunday with Vice President Kamala Harris casting the tiebreaking vote. It now heads to the House for a likely vote at the end of the week.