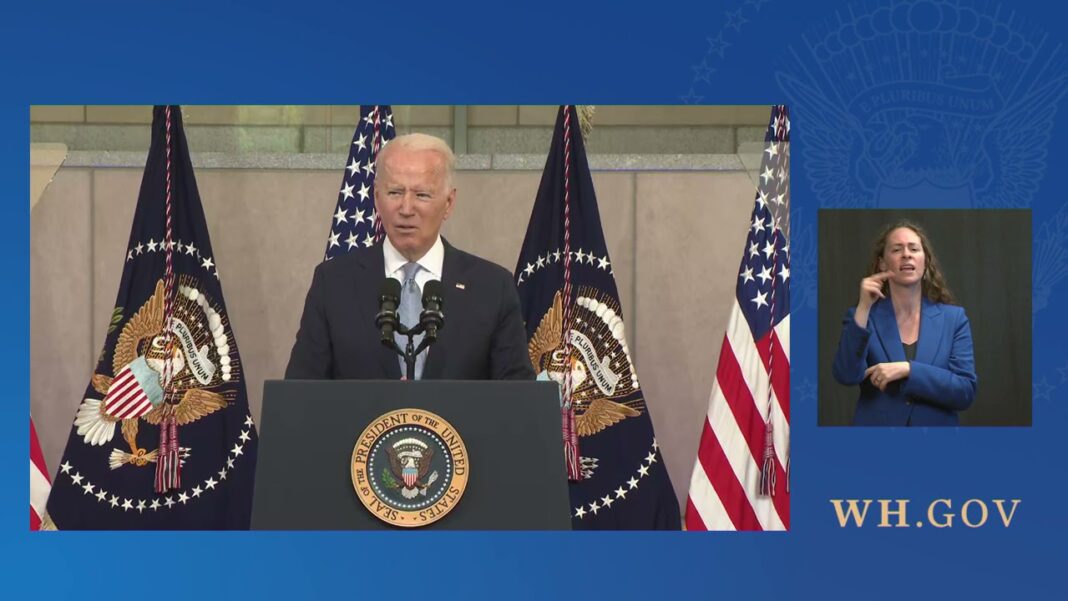 Joe Biden went to Philadelphia on Tuesday and embarrassed himself. This was promoted as a soaring speech about voting rights but turned out to be a pathetic defense of why Biden deserves to be in the Oval Office.

Let’s go to the videotape:

Biden said “Audits, recounts were conducted in Arizona, in Wisconsin. In Georgia, it was recounted three times.” claiming that these actions somehow prove that his election was legitimate.

Wrong. The Wisconsin audit of just two counties, Milwaukee and Dane, showed over 200,000 unlawful ballots in an election decided by just about 20,000.

The Maricopa County, Arizona audit is ongoing, with the discrepancies reportedly found being so immense, additional checks are needed.

2.1 million ballots are being audited in Maricopa County and the certified difference in the election was barely over 10,000 votes.

Georgia is a terrible cesspool where, according recent reports, tens, if not hundreds, of thousands of ballots were likely invalid.

A judge recently ruled in favor of a push to unseal 147,000 ballots in Fulton County, Georgia, alone.

Under 12,000 votes separates Joe Biden and Donald Trump in Georgia.

Biden went on to claim “In America, if you lose, you accept the results. You follow the Constitution. You try again. You don’t call facts “fake” and then try to bring down the American experiment just because you’re unhappy. That’s not statesmanship.”

So Joe Biden wants to follow the Constitution but also wants to unconstitutionally federalize elections, as his favored H.R. 1 would do? What a bunch of nonsense.

Also – let’s not forget that it was Joe Biden who pushed to undermine President – elect Trump and his team in January of 2017. So much for “statesmanship.”

Without an ounce of self – reflection, Joe Biden went on to proclaim that “Bullies and merchants of fear, peddlers of lies, are threatening the very foundation of our country.”

This speech was Team Biden’s response to the freight train of election audits coming across the country and arriving in Pennsylvania last week, with State Senator Doug Mastriano requesting full forensic reviews of Philadelphia, York and Tioga counties.

Philadelphia has been a hotspot of Democrat voter fraud for decades with an elections judge recently being indicted there for… election fraud.

So scared is the left of these in depth looks into the 2020 election that they had the current occupant of the Oval Office rush to Philadelphia, one of the counties whose election results are being subjected to the forensic review, and deliver an angry screed that didn’t say anything but, effectively “leave me alone.”

Biden continued to rant and rave, called the MAGA movement childish names and used Adolf Hitler’s rhetoric in referring to the drive to get to the bottom of the 2020 election as a “Big Lie.”

We don’t know who truly runs this White House, it sure isn’t Biden, since he appears to be barely able to run anything these days.

Whoever is in control, be it Ron Klain or Susan Rice, made a major mistake by sending out feeble Joe Biden to defend his own weak legitimacy.

Remember, according to a recent poll by Rasmussen 55 percent of voters already support the election audits.

Joe Biden’s speech in Philadelphia is sure to only drive that number higher.

Biden’s anger, his weakness, and the actually facts about 2020 only add legitimacy and steam to the freight train of audits that surely won’t be derailed by an incoherent jumble of words from Joe Biden.

Boris Epshteyn is a former Special Assistant to President Trump.