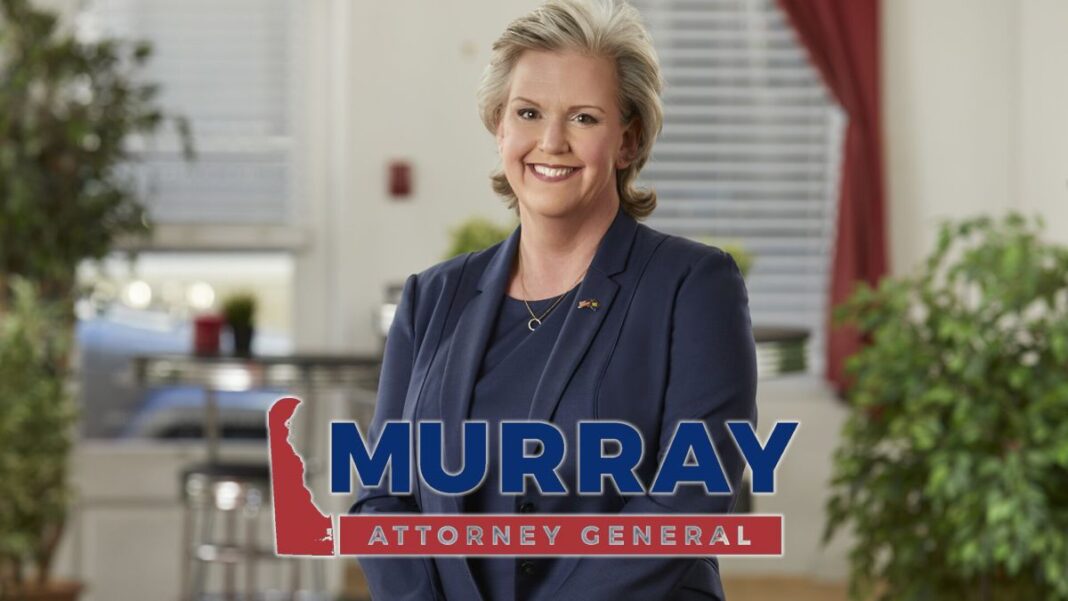 It’s time we come together as a state in Delaware. It’s time we support our community and our constitution to create real change for America. As Attorney General of Delaware, Julianne Murray will do just that.

We the citizens of Delaware should not be afraid to walk to our cars in a parking lot or to walk on the streets of our neighborhoods. We should not have to think about what we are going to do if an angry mob surrounds our car. Yet we do have to think about it. The reality is that we have a shortage of law enforcement and, in many instances, criminals are not being secured while charges are pending.

While we have to be concerned about the constitutional rights of pretrial defendants, public safety has to be the priority. As Attorney General I will act as the Top Cop and will back law enforcement that discharge their duties lawfully. I will also direct my deputies to argue for appropriate security for defendants that presents a public safety risk.

Keep Politics Out of the Job

Quite simply – we have an Attorney General that is choosing not to prosecute many crimes. Law enforcement is frustrated. Victims of crimes that are not prosecuted have no remedy and criminals are emboldened. We need to prosecute. We have to send a message that if you break the law in Delaware you are going to suffer consequences. To not do this is sending the wrong message and essentially inviting criminal activity into Delaware. As Attorney General I will prosecute.

Julianne Murray has never shied away from hard work or a challenge. With crime soaring and an imminent threat to public safety, Julianne will use her energy, determination and knowledge of the law to make our streets safe again.

Julianne is not a career politician. She is someone who has stepped forward to help when she sees a need. Julianne will be an Attorney General, not an Activist General, who backs the blue, makes public safety once again a priority, and holds everyone equally accountable under the law.

Born in Alexandria, Virginia, Julianne was a hardworking student who earned a full academic scholarship to the University of Arizona where she graduated with a Bachelor of Science in Human Resource Management. While earning her degree, Julianne interned as a Staff Training Specialist for the Federal Bureau of Prisons at FCI Tucson.

Longing to return to be near her family, Julianne relocated back to the East Coast and began working as a paralegal for a law firm in Virginia. She married her husband Patrick in 2002 and, shortly thereafter, they relocated from Maryland to Delaware. Julianne became the Administrator for a Sussex County law firm. In 2008, at the age of 38, Julianne took on the challenge and went to law school. She worked at the law firm and attended school full time until her 3rd year when she became an extern for Justice Henry duPont Ridgely of the Delaware Supreme Court. In 2011, Julianne graduated, passed the Delaware Bar and was admitted to practice.

In February 2012, Julianne opened her own practice (Murray Law LLC in Georgetown) and hit the ground running. She built her practice from the ground up and over the course of the next 9 years has added two partners, helped thousands of Delawareans with their legal needs (both civil and criminal) and has been a champion of the U.S. and Delaware Constitutions.

In 2020, Julianne stood up to the Carney Administration that had banned all short-term rentals in a State of Emergency. Due to her lawsuit and the public pressure she built, Governor Carney lifted the short-term rental ban. This same year, Julianne took on the challenge of running for Governor. Running as a political outsider with no background in politics, Julianne was able to win every straw poll, the convention, and the primary, beating five other contenders. Despite campaigning for only 5 months, Julianne had a strong showing, earning more votes than any other Republican gubernatorial candidate in the history of Delaware.

Julianne is the energized and courageous leader Delaware needs.