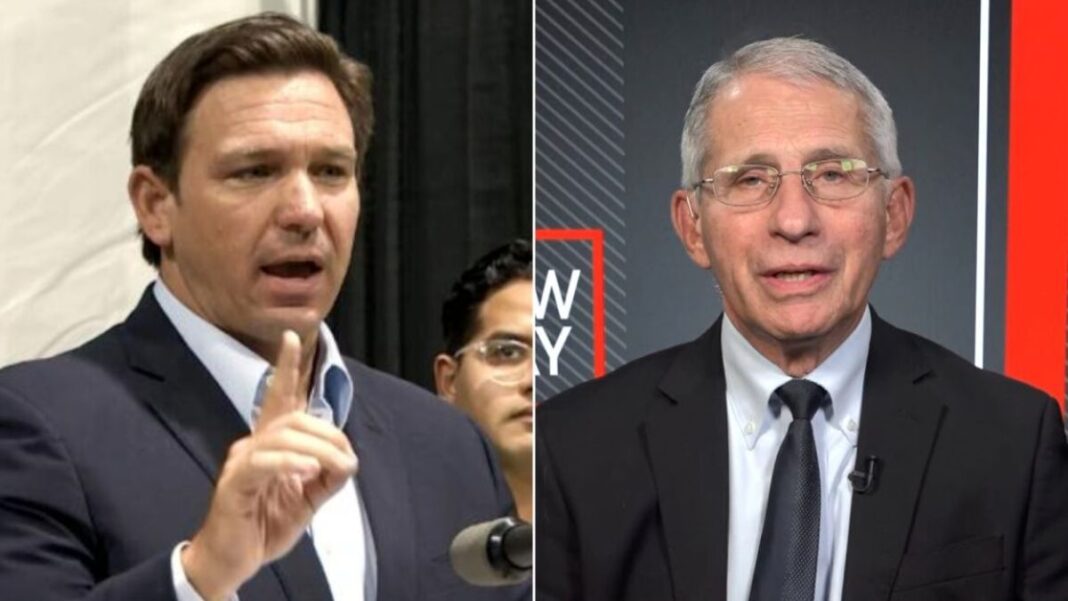 This weekend, I found out that Ron DeSantis has always been “a major booster of vaccines:” NBC just told me so:

“DeSantis was a major booster of the vaccines last year and once called them lifesaving.”

If you were watching mainstream media for the past two years, I bet you didn’t know that. Following the media, you might have gotten the impression that Ron DeSantis was “killing people” by denying them access to the vaccines. Remember when Jim Acosta was shopping for the funeral attire to attend Covid graves in Florida?

Asked about FL’s testing, Psaki says Ron DeSantis hasn’t “advocat[ed] for people in his state to get vaccinated, which we know is the way that people can be protected, ways that lives can be saved” and he should listen to “scientists” “if he wants to be…constructive[.]” pic.twitter.com/6quK0u1KR4

Ron DeSantis was such as “science denier” that the Biden administration denied the state of Florida lifesaving medicine – just to punish the elderly people relying on antibody treatments for the “anti-vax stance” of their Governor.

But today, we are supposed to forget all of that, because over the weekend, instead of attending a gender sensitivity class, the media was going down memory lane. And they found that early on, Ron DeSantis really liked the idea of saving lives:

“DeSantis, like former President Donald Trump, was an early and vocal proponent of the vaccines.”

“Early in the pandemic, Florida Gov. Ron DeSantis repeatedly praised President Donald Trump for the expedited development and rollout of a coronavirus vaccine. The governor’s office pushed for $480 million in pandemic resources, including media campaigns promoting the shots, according to state budget documents.”

Breaking news: it appears that at the start of the pandemic, absent any other data besides what was coming from the CDC, Ron DeSantis invested millions of dollars in a medical treatment that was supposed to save millions of lives. You might think that was a noble endeavor – but you’d be wrong.

“The moves were the latest in a drastic messaging switch from the governor on vaccines, after saying at a May 2021 news conference, ‘The vaccines protect you. Get vaccinated and then live your life.’”

Do You mean that before May of 2021 Ron DeSantis made the mistake of following “the science” of Dr. Fauci? That is just contemptible, given that no other information was available at that time. Shockingly, the media has not remembered that even once in two years – until this happened.

Even before that damaging study came out, Ron DeSantis announced a major investigation into Covid vaccine malpractice. Washington Post calls it “a drastic change in messaging:”

“But this past week, DeSantis threw himself into misleadingly disparaging the vaccines, convening skeptics to buck guidance from the Centers for Disease Control and Prevention and seeking to investigate vaccine makers for fraud.”

If we look closely, the change was a lot less “drastic” than the media lets on. Here is Forbes admitting that the Governor was expressing concern about the vaccine efficacy as early as August 2021:

“[DeSantis] received a Johnson & Johnson Covid vaccine in April 2021, but by August of last year he was claiming vaccines weren’t ‘protecting against transmission to the extent that we had hoped.’”

But right after that admission, Forbes claims (without checking the calendar!) that “the change in messaging” appeared “recently:”

“The change in messaging came as poll after poll last year suggested vaccine skeptics made up a major chunk of the GOP’s base.”

The timing sounds odd. I distinctly remember that the media has claimed since the beginning that the GOP “base” was comprised of the “anti-vaxxers” and “science deniers” (here, here, and here are some reminders.) Apparently, Ron DeSantis wasn’t paying attention to any of that last year. He was waiting for “the polls” to change his policy – which is, again, strange, considering that the Governor does not make decisions based on polls:

Ron DeSantis: “I did not take any polls when I became Governor all the way through this entire term. The job of a leader is not to stick your finger in the wind and try to contort yourself to wherever public opinion may be trending on one given moment. No, the job of a leader is to set out a vision, to execute that vision, to show people that it’s the right vision and to deliver concrete results.”

To illustrate: way before “the polls,” the Governor appointed Joseph Ladapo – a vocal critic of the Faucian school of thought – to serve as Florida Surgeon General. At the time, that appointment was loudly denounced by the media. Since his appointment, Dr. Ladapo issued numerous policy changes to de-emphasize the vaccine approach, which again, the media widely opposed as they came out. But in a stunning case of amnesia, they are now claiming that DeSantis has been a staunch vaccine advocate until as recently as two days ago. And not only that – he was a terrible Covid tyrant to boot:

“DeSantis in March 2020 issued some of the most draconian Covid restrictions of anywhere in the U.S., requiring travelers from New York, New Jersey, Connecticut and Louisiana to check in with law enforcement to assert their quarantine plans. DeSantis quietly dropped the travel ban later that year, after coming out strongly against restrictions like a mask mandate.”

Gavin Newsom’s lockdowns were hailed as “lifesaving” for two years, even after every single state dropped them. But when Ron DeSantis did it while “flying blind,” he did so only because he wanted to terrorize the poor travelers from the states that he picked at random (coincidentally, those were the states with the largest Covid spread at the time.) Very soon, DeSantis “quietly” dropped the restrictions – although I don’t think giving a public press conference qualifies as “quietly:”

Let’s follow the media train of thought. DeSantis imposed “draconian restrictions” (after literally being told to do so by Dr. Fauci) – and that makes him a vicious tyrant. As lockdowns proved to be completely ineffective two months later, he reversed his policy to contradict Dr. Fauci, and he “killed thousands of people” by doing it. Heads – I win; tales – you lose.

Suddenly, the media discovered the importance of “consistent messaging.” They did not care much about it when covering Dr. Fauci. In fact, Fauci’s flip flopping was hailed and praised as “following THE SCIENCE.” However, when Ron DeSantis changed his policy overtime as the new data was coming out – we must believe he did so only for political reasons.

For two years, the media made us believe DeSantis was the biggest “anti-vaxxer” there ever was. Today, they are accusing him of “flip flopping” because of “recent polls.” The fact is the governor’s position has not changed. He initially believed in effectiveness of vaccines, because the data strongly pointed in that direction. As data changed, the Governor’s position also changed. He appointed health professionals who refused to follow “the party line,” and championed research and scientific inquiry. His policies have always been based on their research and recommendations.

It is the media that changed their narrative based on what’s politically expedient. They never mentioned the Governor’s support for vaccines early on, or prioritizing vaccination for the most vulnerable population. Instead, they attacked him when he opposed vaccine mandates. And today, after vaccines have largely failed to live up to their promise, and seem to be doing more harm than good, they declared that DeSantis was the biggest supporter of them, and only changed his “messaging” because he wants to run for President.

In the next episode of “Killing DeSantis:” once Ron DeSantis’ inquiry into vaccine mishandling reveals massive violations, the media will declare him responsible for allowing vaccinations in Florida in the first place.