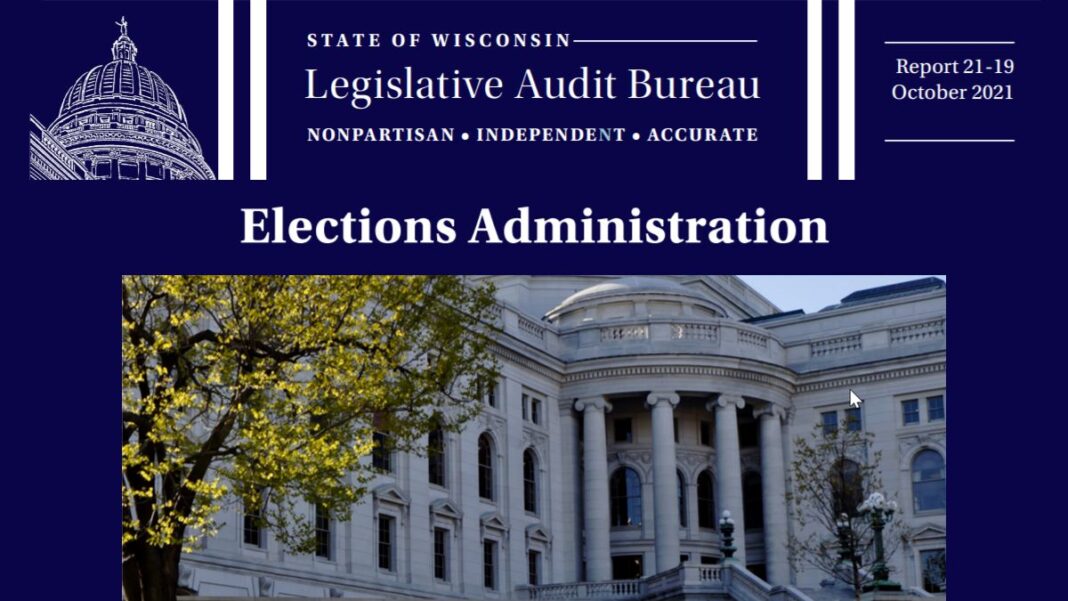 Lawless Elections Are an Existential Threat to Democracy

Conclusive evidence has just been produced that shows the 2020 election in Wisconsin was managed recklessly and lawlessly. While there are still many important questions to be addressed and investigated, we now know that changes must be made before the next election.

The non-partisan Legislative Audit Bureau (LAB) recently released its long-awaited report (here and below) following a process in which members of both parties have consistently expressed confidence. The audit, which was thorough but not comprehensive, identified no fewer than six instances in which state and local election officials “did not comply with statutes” – otherwise known as “breaking the law.”

This news should shock the nation and embarrass Wisconsin officials who participated in or condoned the lawlessness. No less an authority than the United State Constitution assigns responsibility for managing our elections to the state legislatures, yet unelected officials in municipal clerk’s offices and the Wisconsin Elections Commission (WEC) took it upon themselves to ignore established laws and unilaterally invent new rules.

In the aftermath of those explosive revelations, however, the most common headline was “Wisconsin audit finds elections are ‘safe and secure.’” Another headline declared, “No findings of fraud, but Wisconsin election audit questions some of the guidance clerks relied on in 2020.”

These headlines make it seem as though Wisconsin voters have nothing to worry about. And that’s exactly the impression the left wants readers to come away with, especially as it seeks to thwart ongoing investigations and election reform efforts in Wisconsin and other states. But responsible citizens need to look beyond the headlines and hold their government officials accountable for the brazen violations of law that the LAB documented.

The Wisconsin Elections Commission (WEC) is responsible for ensuring compliance with state and federal election laws, and county and municipal clerks administer elections. Statutes require WEC to provide training and guidance to municipal clerks in the state’s 1,849 municipalities. Statutes also require WEC to design and maintain the state’s electronic voter registration system, which is known as WisVote; maintain the MyVote Wisconsin website, through which individuals may register to vote and obtain absentee ballots and other election-related information; and approve electronic voting equipment before it can be used in Wisconsin. Statutes specify how individuals can submit complaints pertaining to elections administration issues to WEC. WEC was created by 2015 Wisconsin Act 118, which was enacted in December 2015, and began operation on June 30, 2016. WEC replaced the Government Accountability Board (GAB), which was abolished by Act 118.

WEC includes six commissioners who serve for five-year terms, including:

Appendix 1 lists the six WEC commissioners as of October 2021 and indicates how each commissioner was appointed.

WEC is statutorily required to appoint an administrator with the advice and consent of the Senate. This administrator, who serves as the state’s chief election officer, performs the duties assigned by WEC and appoints other staff as needed to help carry out these duties. Statutes require WEC’s staff to be nonpartisan. WEC has delegated to the administrator limited authority to act without its involvement. In February 2020, WEC delegated the authority for the administrator to exempt municipalities from polling place accessibility requirements, exempt municipalities from using electronic voting equipment, and execute certain contracts up to $100,000. WEC also delegated the authority for the administrator to take specified actions in consultation with its chairperson, including when considering certain complaints.

After the General Election on November 3, 2020, questions were raised about elections administration issues, including compliance with election laws, the use of electronic voting equipment, and complaints filed with WEC and clerks. On February 11, 2021, the Joint Legislative Audit Committee directed us to evaluate elections administration issues, including:

efforts by WEC to comply with election laws, including by working with clerks to ensure voter registration data include only eligible voters, and by providing training and guidance to clerks;

To complete this evaluation of issues pertaining to the November 2020 General Election:

We reviewed all 45 sworn, written complaints pertaining to the General Election that were filed with WEC as of late-May 2021, and we reviewed 1,521 election-related concerns that individuals provided through forms on WEC’s website from January 2020 through mid-April 2021.

Based on our audit work:

Because our audit was not approved until three months after the November 2020 General Election, we did not directly observe Election Day practices, including how poll workers processed ballots and how electronic voting equipment operated. The U.S. Department of Justice indicated that election officials are responsible for retaining and preserving election records, regardless of who physically possesses them. In part as a result of this guidance from the Department of Justice, the City of Madison clerk did not allow us to physically handle election records. In addition, county clerks indicated that we would not be able to handle ballots for Milwaukee County and the Town of Little Suamico. Combined, the City of Madison, Milwaukee County, and the Town of Little Suamico accounted for 623,700 of the 3.3 million ballots cast in the November 2020 General Election (18.9 percent). Therefore, to complete our audit we relied on available evidence we were able to access, including WisVote data, absentee ballot certificates that we could physically handle, other election records, and information provided to us by municipal clerks, county clerks, WEC’s staff, and other individuals.

Statutes require us at all times to observe the confidential nature of any audit being performed. As a result, we completed our audit independently from legislators, WEC, and all other individuals and organizations. Although we typically allow an audited entity the opportunity to review our draft audit report and respond in writing to it, we did not do so for this report. Because we contacted a total of 179 clerks, sharing the draft audit report with so many individuals would have compromised the report’s confidentiality. In addition, because WEC’s administrator has limited authority to act without WEC’s involvement, we would have needed to provide our confidential draft audit report to WEC for its consideration. Statutes allow governmental bodies such as WEC to convene in closed session only for specified purposes, none of which pertains to reviewing draft audit reports. Thus, to preserve the statutorily required confidentiality of our audit until its completion, we did not provide WEC with an opportunity to review a confidential draft audit report and respond in writing to this report prior to its release.