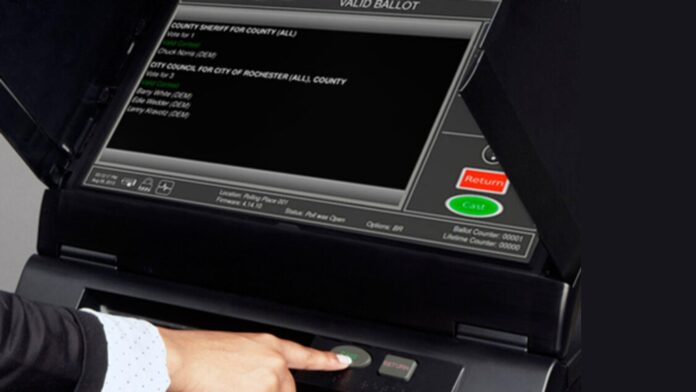 6 election security threats to watch for on Election Day

Hacking threats and disinformation fears loom large as voters head to the polls.

November 07, 2022 ~ The midterms face a bevy of digital threats, from stolen Twitter accounts to hacked election websites, that could spark chaos, confusion and unrest that last long after the polls close.

The 2020 presidential election was rife with allegations of voting machine hacks that were later debunked. Yet there are real risks that hackers could tunnel into voting equipment and other election infrastructure to try to undermine Tuesday’s vote.

The U.S. has many safeguards protecting voting equipment, so any actual hack would probably be localized, quickly detected and unlikely to affect final results. But as 2020 showed, even an attempt to change votes — or the mere allegation of tampering — could undermine faith in the outcome.

The federal government has worked since 2016 to improve coordination with state and local officials on everything from fixing digital vulnerabilities to promoting trusted sources of information. Biden administration officials say that’s one reason that they’ve seen less foreign interference than in 2016.

But as CISA Director Jen Easterly, whose agency leads federal election security efforts, told reporters recently, “The current election threat environment is more complex than it has ever been.” She cited the ways that multiple different threats, from cyberattacks to disinformation to the harassment of election officials, are overlapping.

The voting machine hacking threat you probably haven’t heard about

October 14, 2022 – There’s a largely overlooked hacking target that could help those who want to sow doubt about vote tallies in the November midterms: cellular modems that transmit unofficial election-night results.

The modems, which send vote data from precincts to central offices using cellphone networks, help election officials satisfy the public’s demand for rapid results. But putting any networking connection on an election system opens up new ways to attack it that don’t require physical access to machines, and security experts say the risks aren’t worth the rewards.

“You’re counting on a bunch of infrastructure to deliver data back and forth, and it’s well within the capabilities of nation-state hackers to break into that infrastructure,” said Dan Wallach, a Rice University computer science professor who has repeatedly exposed flaws in election equipment.

While tampering with unofficial results wouldn’t actually corrupt an election’s outcome, it could fuel misinformation about both the accuracy of the vote tally and the integrity of the process. That’s a particular concern since the 2020 election, in which then-President Donald Trump seized on large discrepancies between early returns and final vote counts to falsely allege widespread fraud.

At least six states — Florida, Illinois, Iowa, Massachusetts, Michigan and Minnesota — use modems to transmit results in a combined 36 counties, according to a POLITICO survey. Rhode Island uses them statewide, and Washington, D.C., uses them citywide. Wisconsin, which the nonprofit election integrity group Verified Voting identified as using modem-equipped devices, did not respond to inquiries about whether its counties use the feature.

While there’ve been no reports of modems being hacked in previous elections, the vulnerabilities are well known, and hackers have the tools to exploit them.

And the mere existence of these modem vulnerabilities could make it easier for Trump allies to disrupt the midterm elections and future contests with more unfounded hacking claims, say some former election officials.