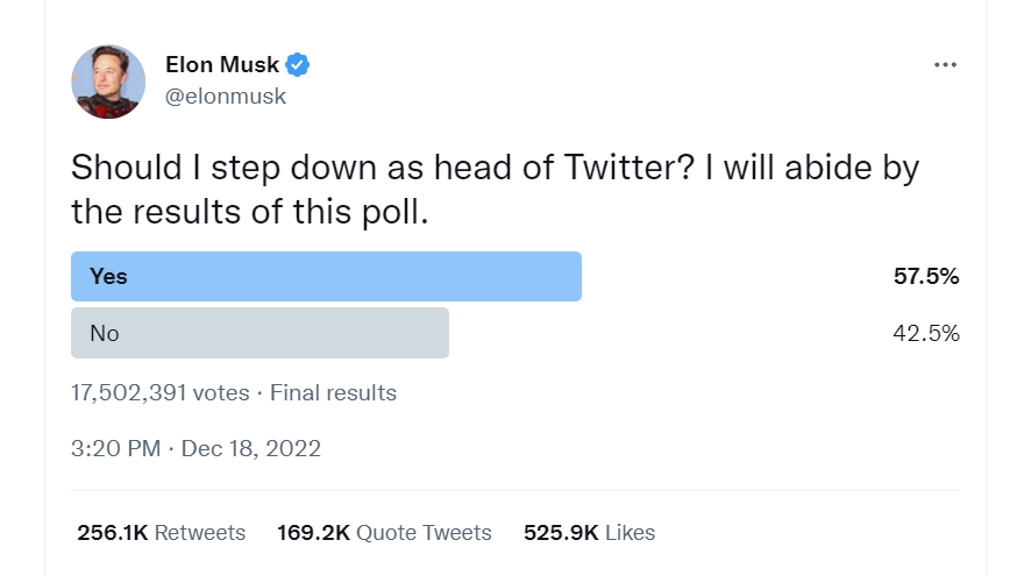 Expectations are building that Elon Musk will step down as CEO of Twitter after a poll that he launched and vowed to “abide by” showed a majority of respondents voting “yes” to his departure from the helm of the social media giant.

Musk posted the poll on Dec. 18, asking whether he should step down as head of the company less than two months after he bought the platform, pledging that he’d abide by its results.

At the time, he didn’t say when he’d leave the post if the poll showed that he should, while replying to one Twitter user’s comment on a possible change at the helm of the social media giant that, “There is no successor.”

The poll closed at about 6:20 a.m. New York time on Dec. 19, with the final tally showing that 57.5 percent voted in favor of Musk’s departure.

Should I step down as head of Twitter? I will abide by the results of this poll.

Musk’s most recent post before the poll’s conclusion stated, “Those who want power are the ones who least deserve it.”

Before the poll closed, Musk engaged with several posts about him potentially leaving the top job.

The Whole Mars Catalog account on Twitter commented that Musk should “hire someone as Twitter CEO … that way when things go wrong you can blame that person, but you still ultimate [sic] control as the owner.”

Podcast host Lex Fridman said he had a “fun” suggestion, namely that he should be allowed to “run Twitter for a bit. No salary. All in. Focus on great engineering and increasing the amount of love in the world.”

Musk replied by clarifying to prospective replacements that any new CEO “must like pain a lot. One catch: you have to invest your life savings in Twitter and it has been in the fast lane to bankruptcy since May. Still want the job?”