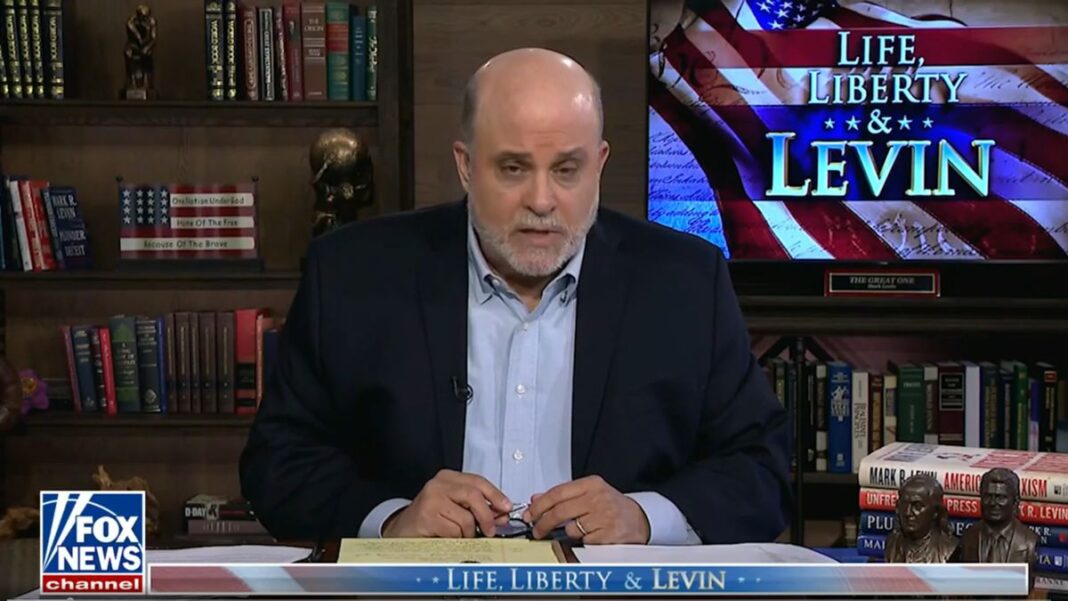 Mark Levin: I want to mention a few things related to the Biden crime family. Just a reminder, there are a series of questions whether Joe Biden used his public office and position to enrich himself and his family to the tune of over $30 million. And why he and family members received millions, even tens of millions from foreign governments and front corporations in China, Russia, Ukraine, and other places.

You have witnesses like Bobulinski who are on the record publicly and who did a long interview, one or two with the FBI and was never contacted again. You have other potential witnesses and actors who are named in the e-mails, and in the e-mails on the laptop, you have dates and times and transactions, really anything you would need.

And we have Treasury SAR reports, these are suspicious activity reports on wired funds, which the Treasury Department is withholding from the Republicans in the House of Representatives, but they have some in the US Senate on the Republican side, which gives you a lot of information.

Joe Biden said during the course of the campaign against Donald Trump that he has never discussed Hunter’s overseas business dealings. Joe Biden is a pathological liar. He certainly did and the evidence is abundant.

Fifty-one Intel and National Security so-called experts who were rooting for Joe Biden claimed the laptop was Russia disinformation even though they had never seen it. They are liars. Who organized that? Who put that letter together in order to mislead the American people and law enforcement?

The FBI warned about Russia disinformation at the same time that this laptop was an issue before the 2020 election, met regularly with Twitter. We now know that, thanks to the new Twitter and Elon Musk, regularly with Facebook. In other words, they tried to wave off Big Tech in the oligarchs, including Facebook and Twitter from the laptop story.

The FBI had the laptop as I said for nearly a year, they did nothing, yet, it could verify everything.

We know that accounts and finances were commingled, Hunter’s and Joe’s.

We also know that hunter would pay for things for Joe. Did Joe pay taxes on that? That apparently was a huge issue with the Trump Organization and their former CFO. Remember him? They brought charges because, well, there were all kinds of gifts that weren’t reported.

How about Joe Biden? Has he reported all these gifts? I don’t think so.

Whistleblowers: We have Joe involved in meetings and phone calls involving some of Hunter’s linked businesses. We have pictures with Joe Biden with certain of Hunter’s partners. These raise criminal issues, I’m not saying they’re guilty, they just raise criminal issues of wire fraud, money laundering, tax evasion, conspiracy to defraud the government, failure to register as a foreign agent — all kinds of stuff that’s been used against all kinds of people in the recent past. But why does this stuff matter?

But before we get to that there’s more. Taxes: Joe Biden prides himself on releasing his individual income taxes, and he has been celebrated for this and he has taken shots at Donald Trump over this. Well, it could be because Joe Biden hasn’t really released all of his taxes, has he?

This is from Chris Jacobs writing in The Wall Street Journal some time ago. “According to their tax returns.” That’s Joe and Jill Biden, “. in 2017 and 2018, the Biden’s and his wife, Jill avoided payroll taxes on nearly.” it looks like “. $13.3 million in income from book royalties and speaking fees. They did so by classifying the income as S-corporation profits rather than taxable wages.”

The Biden’s did pay themselves salaries from these S-corporations of nearly $750,000.00 between them over two years, and they paid full taxes on the income, but they circumvented payroll taxes, Obamacare taxes, Medicare taxes.

So they protected 95 percent of their income that went through this loophole, shall we say, an S-corporation. That’s what the left calls it. And so millions of dollars were protected from the payroll tax, and that accumulates to almost half a million dollars in taxes they otherwise would have paid, had they not set up these S-corporations.

Now, here’s the problem. They have said these S-corporations represent money they earn from speeches and book writing. How do we know that? Well, USA Today said it did. Well, how do they know? They cited the Biden campaign website.

So the question is, and I don’t have the answer, if they want to be transparent, they want to prove us all stupid. Why don’t they release those S-corporation tax returns? Where did all this money come from?

Bob Anderson writing in “The Federalist” about half a year ago or so he says” “Recall that despite then presidential candidate Biden having bragged that he had released his tax returns with what his team called a historic level of transparency. The truth is that he only released his individual returns. Those returns provided no detail regarding the source of most of the income dollars that flowed to him and his wife, Jill, by way of S- corporations they set up shortly after his departure from the office of Vice President.”

The entity, CelticCapri Corp, his, and Giacoppa Corp, hers, contain more than $13 million of the 17 million the couple had reported in income after Biden left office, most of it in the first year in 2017.

Now, a notable $8.7 million gap exists between its $9.5 million net income in 2017, and the $809,709.00 of disclosed income that year from book tour and related speaking events. Since this disclosure covers only part of 2017. We lack the insight into other income that may explain it.

Did any of that money — he is just asking — or other overseas income go to Joe or Jill? Will we know that the President provided a copy of the S- corp tax returns with all the partner K-1’s ones that flowed through them? But the only detail we have to aggregate numbers reported on the couple’s individual’s returns are the ones given to us by the campaign, by the Biden’s in the press.

Well, we now know thanks to the US Supreme Court, that when the Republicans take over the House, they can get access to Joe Biden’s S-corporation returns, all of it. They get access to all of Hunter Biden’s corporate or individual returns assuming he filed taxes. Apparently, he had his lawyer or his lawyer voluntarily paid a million or two to cover his back taxes.

As a matter of fact, as a footnote, thanks to the US Supreme Court, Congress now has the power, given the fact that they allowed a lame duck Democrat Committee of Congress two weeks ago, to get six years of Donald Trump’s tax returns for no reason whatsoever. There can’t be a legislative purpose. They’re not going to be there in the majority and a few weeks.

They can get access to Nancy Pelosi’s tax returns, Barack Obama’s tax returns, and Michelle, of course, George W. Bush’s tax returns — hell, they can even get the Chief Justice of the United States’ tax returns. Thank you, Supreme Court. What a dumb decision.

The door is wide open for the Republicans to get returns on private citizens, public officials. anyone they want, just say it’s a legislative purpose.

Now, let’s move on. Why am I laying all this out? Because of this in “The Washington Post.”

A guy by the name of David Brock, he’s a reprobate, a radical leftist who runs Media Matters and other left-wing groups. He has a hate on for conservatives in the Republican Party, a hate on for Trump, and a hate on for all Republicans.

“Washington Post” points out that there was a meeting in September, and among others, Brock and some of the big wig activists on the Democrat and liberal side and Hunter Biden’s lawyer, a guy by the name of Kevin Morris, were very blunt in laying out as “The Washington Post” writes, a strategy session they had on expected onslaught of investigations and how they were going to fight back.

They described the possibility of defamation lawsuits — they put this out to “The Post” and made it public, that they could pursue against the Presidential son’s critics — FOX News, Eric Trump, Rudy Giuliani, anybody they want. They are already trying to dig up dirt on anybody who might make accusations.

This article goes on and on and on. A group called Courage for America, a SWAT team called Facts First, the Congressional Integrity Project, and also the White House — all of them are involved in what’s going to be a character assassination campaign against anybody who dares to speak out against the Biden crime family, or appear before a Committee of Congress or appear on a news program. That’s called intimidation.

You know what else that is called? Maybe the US Attorney in Washington, DC might be familiar with that — obstructing an official effort by Congress to conduct an investigation. I wonder what Merrick Garland will do about this.

And it’s clear, the purpose here is to interfere with the operations of Congress and is subject to contempt. There is no need to make a general threat to prosecute people for defamation in advance of testimony, because that anticipates an event that is yet to happen. And the only reasonable interpretation of what is reported in the article is that it is intended to have a chilling effect, to threaten people and prevent testimony.

Now, if I were the lawyer for Hunter Biden, Mr. Kevin Morris, or Hunter Biden himself, I’d watch what I say and be very careful in any criminal violation by contempt of Congress, or an extortionist threat can be prosecuted up to the end of the statute of limitations. I would encourage the Judiciary Committee in the House, the House Oversight Committee, you get a hold of this article, you take down names, and you find out who was threatening to interfere with your investigation and whether that goes to the highest levels of the White House.

What do we have here? Nixon two? I don’t really know, but it is troubling.

And then finally, this issue of the Special Counsel. How the hell do you have all this evidence, evidence of this kind of activity, of enriching a family, a Vice President who becomes President, with foreign governments and foreign corporations, serious questions about whether their taxes are accurate, the Emoluments Clause when it comes to the President of the United States, and whether or not we actually have a man in the Oval Office who has been compromised by among others, the Communist Chinese Party?

How the hell do you not appoint a Special Counsel to investigate him? Not his son. Him? How is that possible?