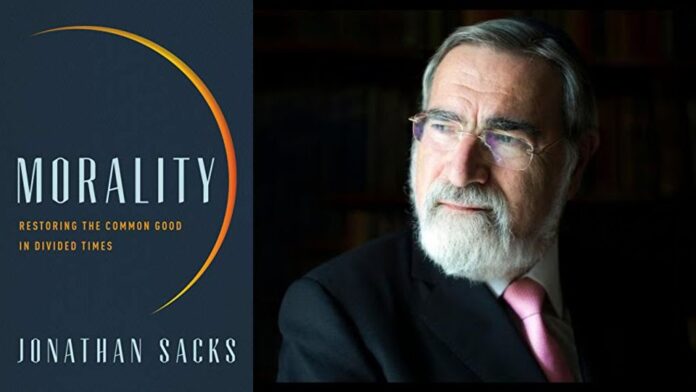 A distinguished religious leader’s stirring case for reconstructing a shared framework of virtues and values.

With liberal democracy embattled, public discourse grown toxic, family life breaking down, and drug abuse and depression on the rise, many fear what the future holds.

In Morality, respected faith leader and public intellectual Jonathan Sacks traces today’s crisis to our loss of a strong, shared moral code and our elevation of self-interest over the common good. We have outsourced morality to the market and the state, but neither is capable of showing us how to live. Sacks leads readers from ancient Greece to the Enlightenment to the present day to show that there is no liberty without morality and no freedom without responsibility, arguing that we all must play our part in rebuilding a common moral foundation.

A major work of moral philosophy, Morality is an inspiring vision of a world in which we can all find our place and face the future without fear.

“Jonathan Sacks has produced a work of extraordinary depth, beauty, urgency, and erudition. If the prophets of the Hebrew Bible came back to guide liberal democracies and anxious citizens through this difficult time, but first they studied modern history and social science, this is the book they would write for us.”―Jonathan Haidt, author of The Righteous Mind and coauthor of The Coddling of the American Mind

“Jonathan Sacks is one of the great moral thinkers of our time. His latest book, Morality, applies his powerful approach to the unprecedented challenges of our time –social, political, economic, and above all, cultural. May his words be heeded throughout the land.”―Robert D. Putnam, author of Bowling Alone and The Upswing

“I highly recommended people check out [the new book]…I can think of nothing more important right now in embracing this and shifting from ‘I’ to ‘We.'”―Tim Ferriss, The Tim Ferriss Show

“Morality is not an argument or a compilation of thoughts — it is a wake-up call to a world that has become self-obsessed, self-centered and lonely, and whose moral standards have withered as a result.”―Jerusalem Post

“This major work in moral philosophy and theology should engage all readers, but particularly scholars, undergraduates, and graduate students.”
―Library Journal

“An impressive tour d’horizon of the state of the western world — the US and the UK in particular — at the end of the second decade of the 21st century.”
―Times of Israel

“If you are looking for a book to read during these strange and stressful days, look no further than Jonathan Sacks’ magnificent Morality.”―Matthew D’Ancona, Evening Standard

“In his new book, Morality, the former chief rabbi, Jonathan Sacks, makes a very basic and crucial point about the nature of morality: it is based on ‘we’ and not ‘I.'”―Giles Fraser, Daily Telegraph

Rabbi Lord Jonathan Sacks is an international religious leader, philosopher, award-winning author, and respected moral voice. The chief rabbi of the United Kingdom and the Commonwealth of Nations from 1991 to 2013 and the recipient of the 2016 Templeton Prize, he is the author of over thirty books, most recently Not in God’s Name.