A third police officer who responded to the January 6 U.S. Capitol breach has died by suicide, CNN reported on Monday, citing the Metropolitan Police Department of the District of Columbia.

In addition to the three, Capitol Police officer Brian Sicknick died from a stroke unrelated to the breach.

News of Gunther Hashida’s death comes one week after the first hearing by the U.S. House select committee investigating the events surrounding the riot. 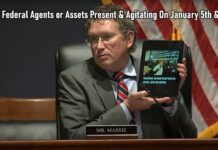 A New Wave Of GOP Candidates Coming To DC To Take...