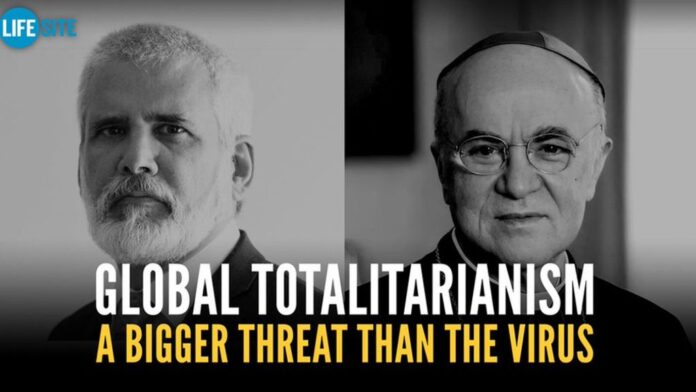 In a recent interview with LifeSiteNews, Dr. Robert Malone, the original inventor of the mRNA vaccine technology, explained why he thinks that global totalitarianism is a bigger threat than the COVID-19 virus. Malone also praised the recent call of Archbishop Carlo Mario Viganò to form an anti-globalist alliance to combat COVID tyranny.

Speaking on November 27 with LifeSiteNews, Dr. Robert Malone, the original inventor of the mRNA vaccine technology 40 years ago, praised the recent call by Archbishop Carlo Maria Viganò to build an anti-globalist alliance. Speaking about this appeal, Dr. Malone said, “I think he nailed it right on the head. I think he called it correctly. And I think it showed great bravery and foresight.”

Archbishop Viganò had proposed on November 18 to “free humanity from a totalitarian regime that brings together in itself the horrors of the worst dictatorships of all time,” and he challenged “rulers, political and religious leaders, intellectuals and all people of good will, inviting them to unite in an alliance that launches an anti-globalist manifesto, refuting point by point the errors and deviations of the dystopia of the New World Order and proposing concrete alternatives for a political program inspired by the common good, the moral principles of Christianity, traditional values, the protection of life and the natural family, the protection of business and work, the promotion of education and research, and respect for creation.”

LifeSiteNews sat down with Dr. Malone for an interview at his home and horse farm in Virginia. The interview was conducted as a joint venture for LifeSiteNews and the Austrian Catholic newspaper Der Dreizehnte. In the interview, Dr. Malone showed himself a strong opponent to the currently debated and planned vaccine mandates, lockdown policies, and mask mandates, all of which are, according to his study and research, ineffective and potentially harmful to human health.

In light of the lockdown policies that are strongly impeding the human liberty of movement, of travel, and of social gatherings as a whole, LifeSiteNews asked Dr. Malone whether he could explain the recent statements he made on Steve Bannon’s War Room show about the danger of “global totalitarianism,” as it is being played out right now in countries such as Austria and Australia.

The vaccine expert compared the lockdowns with the “camel’s nose” metaphor: “Once the camel’s nose gets in the tent, pretty soon the whole camel is in the tent,” Dr. Malone said.

“We have this tendency in western democracies — frankly, I think Great Britain is particularly susceptible — to this idea that we’re doing it for the common good that we can do social engineering, we can have these interventions.”

While these democracies claim that these measures are “limited, just for one thing,” we see “this incrementalism” taking place, Dr. Malone continued. As an example of this phenomenon, he referred to Great Britain’s Trusted News Initiative. Originally aimed at “resisting incursion into our political system from offshore political interests,” it has now been “weaponized against vaccine dissent. Really, it’s what it comes down to: It’s dissent about interpretation of facts and information.”