Association spokeswoman Betsy Brantner Smith said in an interview that Congress should hear testimonials from thousands of officers who were injured during demonstrations, riots, arson, and other violence last year following the death of George Floyd.

During the first hearing for the House select committee on the Jan. 6 breach, four police officers offered testimony saying that individuals who entered the Capitol made specific threats against them.

“People need to see that police officers go through horrible things, and Jan. 6 was a horrible thing for some of those officers,” Smith told Fox News. “But, quite frankly, I find this whole Jan. 6 Commission, frankly, a dog and pony show. It doesn’t tell the whole story.”

Later, Smith questioned why the federal government hasn’t provided more information about the shooting death of Ashli Babbitt, one of several Trump supporters who died during the incident, or raised questions about video footage of Capitol Police officers’ interactions with demonstrators on Jan. 6.

On July 27, one of the testifying officers, Daniel Hodges, who works for the Metropolitan Police Department, recounted being allegedly told, “You will die on your knees.”

Hodges said he was kicked in the chest and struck with something heavy in the head as other officers and he clashed with a crowd near the Capitol.

But Smith suggested that the injuries those officers suffered likely paled in comparison to the numerous officers who were injured during riots last year.

“We have a Las Vegas police officer who is still paralyzed from the Black Lives Matter riots,” she told Fox. “We have thousands of police officers around the country who are retiring because of post-traumatic stress because of the riots. 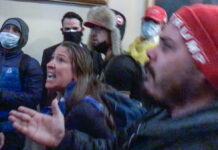