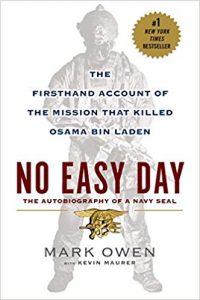 The Navy SEAL who used a pseudonym to write an upcoming book on the raid that killed Osama bin Laden has been revealed.

Penguin Books, which is publishing “No Easy Day: The firsthand account of the Mission That Killed Osama bin Laden”, said the author used the pen name Mark Owen and changed the names of his fellow SEALs for security reasons.

But Fox News published Owen’s real name, saying he is a 36-year-old Alaskan and former member of the so-called Team 6 that killed bin Laden in a May 2011 assault on the al-Qaida chief’s compound in Abbottabad, Pakistan. — The Associated Press also published his name; other news outlets, including CNN, chose not to do so.

“Owen was one of the first men through the door on the third floor of the terrorist leader’s hideout,” Penguin said in a press release on Wednesday, “and was present at his death”:

Owen said the reason he wanted to write the book, co-authored with Kevin Maurer, was to “set the record straight about one of the most important missions in U.S. military history.”

Pentagon officials, though, say they have not vetted the account. Penguin said the publisher consulted with a former special operations attorney on its release.

“He vetted it for tactical, technical and procedural information as well as information that could be considered classified by compilation and found it to be without risk to national security,” Christine Ball, a spokeswoman for Dutton, told The Associated Press.

“I haven’t read the book and am unaware that anyone in the department has reviewed it,” Pentagon press secretary George Little said Thursday.

Defense Department spokesman Lt. Col. James Gregory said that if the book reveals classified information about the raid, the Pentagon would turn the case over to the Department of Justice.

Since the bin Laden raid, “there has been a consistent and effective effort to protect the identity of those that participated in the raid,” then-Defense Secretary Robert Gates said in 2011. “I think that that has to continue.”