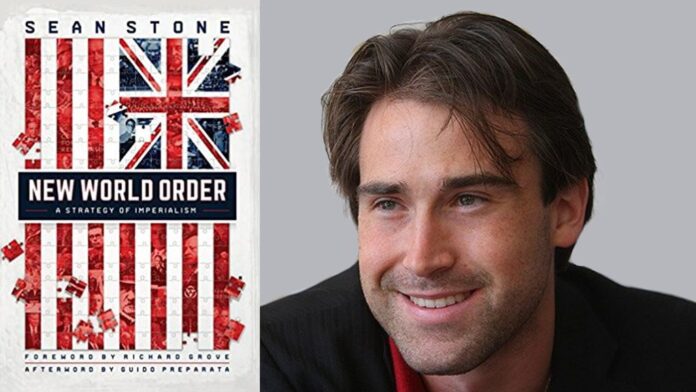 A sweeping overview of world affairs and, especially having come across the name of William Yandell Elliott, Professor of Politics at Harvard through the first half of the 20th century. Sean found that Elliott had created a kindergarten of Anglo-American imperialists amongst his students, who included Henry Kissinger, Zbigniew Brzezinski, Samuel P. Huntington, and McGeorge Bundy. Upon further investigation, Sean came to understand Elliott’s own integral role, connecting the modern national-security establishment with the British Round Table Movement’s design to re-incorporate America into the British ’empire’. Whether that goal was achieved will be left to the reader to decide. However, it cannot be denied that W.Y. Elliott’s life and intellectual history serves to demonstrate the interlocking relationship between academia, government, and big business.

“Overall, I am very impressed with both the intelligence underlying this book and the interesting factual information in it. I learned a lot by reading it.” —Dr. Peter Dale Scott, former Canadian diplomat; professor emeritus, University of California, Berkeley; author, Deep Politics and the Death of JFK, The Road to 9/11, The War Conspiracy, and American War Machine

Globalization has been viewed skeptically by a percentage of the population for awhile. Organizations such as the Council on Foreign Relations, the Bilderberg Group, and the Trilateral Commission have generated fear of one-world takeover, loss of sovereignty, and mind control. Sean Stone’s New World Order delves into the life and views of William Yandell Elliott, a professor at Harvard University who would mentor distinguished pupils like Henry Kissinger and McGeorge Bundy. Elliott was a proponent of World Government. He was a believer in the philosophy of Englishmen Cecil Rhodes, Lord Milner, and the Round Table Group. Elliott would work behind the scenes of many presidential administrations, offering his advice while pushing an agenda that put control on arms and resources. His ideas would be couched in platitudes, but a hidden agenda lay underneath, that of a New World Order.

Sean Stone has created a work of great interest as respects the shadows of power. Stone seeks to unmask the brokers who work under the cover of diplomacy and education but push a hidden agenda that benefits few, while hurting many. Stone’s book is bookended by explorations of conspiracy theories surrounding these groups, which are often derided by the mainstream media as well as the Catholic Church’s place in the middle of the battles of NWO groups. Stone’s book is a must-have for students of Alternate History. Reviewed By: Philip Zozzaro

Sean Stone has grown up in the film-world, having acted since childhood in his father Oliver Stone’s films, including The Doors, JFK, and Natural Born Killers (1994), Wall Street: Money Never Sleeps, before becoming a director in his own right with Greystone Park (2012). He graduated from Princeton in 2006. Stone co-hosted the third-season of the popular TV series Conspiracy Theory with Jesse Ventura. He is currently the co-host of the internationally aired news show Watching the Hawks, and also hosts the weekly online interview program Buzzsaw on The Lip TV.

In 2003, Richard Grove filed for federal whistleblower protection under the Sarbanes-Oxley Act of 2002. In 2006, he released on mp3 a 2-hour public disclosure Project Constellation: A Message to the Future of America. What may have sounded like conspiracy “theories” in 2006 (Data-Mining and Spying on Citizens, The Planning of Financial Catastrophes, NSA/Google, and Corporate Media partaking in the demolition of our civil liberties), proves today to be relevant and verifiable historical facts related by Richard during his public disclosure via Project Constellation, and evident in his continued productions ever since.

Since then, Richard has created more than 500 hours of educational and informative media productions, including a comprehensive conscious curriculum to teach individuals methods for learning anything and everything for themselves (a.k.a. The Peace Revolution Podcast). Some of his more powerful publications include: State of Mind: The Psychology of Control (2013 co-production),History… So It Doesn’t Repeat (2013 series), The Ultimate History Lesson with John Taylor Gatto (2012), The Peace Revolution Podcast (2009-Present), What You’ve Been Missing: Exposing the Noble Lie (2010), 20/20 Hindsight CENSORSHIP on the Frontline (2010), and Project Constellation (2006).

Richard’s comprehensive film production list from 2006-Present can be found here and here. In 2013, ten years after blowing the whistle, Richard was nominated by author G. Edward Griffin to be listed in the Freedom Force International Hall of Honor. Richard’s 2013 “Tragedy and Hope Trailer / Demo Reel” illustrates his talent for producing media to illustrate the Big Picture which he observed, before retiring from corporate America.