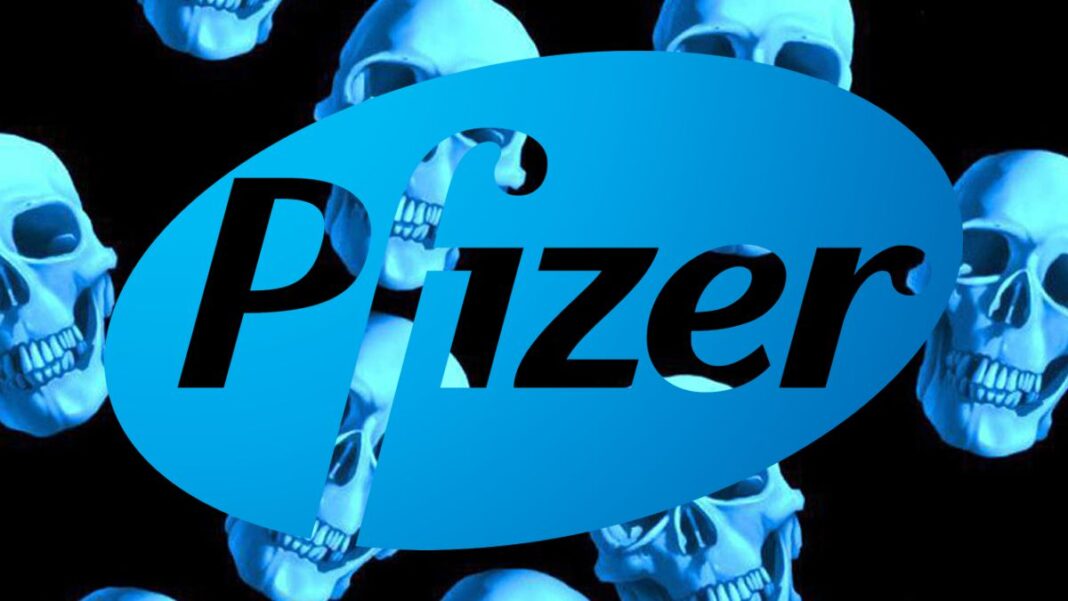 mRNA spike protein wasn’t the only thing autopsies found in people who died shortly after getting the jab. Combined with insurance datasets showing the increase in deaths had a 1 in 390,632,286,180 chance of occurring spontaneously, this is a dagger through the heart for Pfizer and their crew.

Contrary to the official narrative (and hence popular belief), the COVID shots have no demonstrated safety. In Episode 298 of The Highwire, Del Bigtree interviews attorney Aaron Siri about the various lawsuits his firm has brought to reverse COVID jab mandates.

Siri describes a recent deposition of Dr. Kathryn Edwards, a world-leading vaccinologist who sat on Pfizer’s data safety monitoring board (DSMB). This five-member committee oversaw the safety of Pfizer’s jab. A DSMB is supposed to be an independent group of experts, whose responsibility it is to monitor patient safety and treatment efficacy data while a clinical trial is ongoing.

As noted by Siri in the deposition, since the DSMB is supposed to be independent, it’s crucially important that all the members of that board have no potential conflicts of interest and are in fact truly independent of the drug company whose product they’re evaluating.

In the case of Edwards, she was a paid adviser to Pfizer before she was hired (by Pfizer) to be on the DSMB for their COVID jab. According to Edwards, this fact is irrelevant, because that prior relationship did not influence the work she did on the board.

“I say what I believe based on my expertise,” she told Siri. “So, you don’t think financial incentive can sway people’s judgment at all?” Siri asked. “It does not sway my judgment, Sir,” she replied. “Then why have an independent DSMB?” Siri asked. “Why doesn’t Pfizer just have some of its employees on it?”

Another noteworthy tidbit from that deposition was Edwards’ comment that she reviewed “lots of reactions and adverse events” from the COVID jab trial. Yet the public has continuously been told there are no bad reactions. So, what was she looking at? And why, if there were “lots of reactions,” did the DSMB conclude that there are no safety concerns?

Of course, we know at least some of what she was looking at. Pfizer trial documents1 have been released showing the company amassed nine single-spaced pages’ worth of “adverse events of special interest” (see pages 30 through 382), including 1,223 events with fatal outcomes between December 1, 2020 and February 28, 2021 alone.

A whistleblower who worked on Pfizer’s Phase 3 trial has also come forward with evidence showing data were falsified, patients were unblinded and follow-up on reported side effects lagged way behind. Why didn’t any of these issues concern the DSMB? Was it because there really was no independent DSMB?

What German Autopsy Data Have Revealed

In a mid-December 2022 Substack article, the anonymous writer who goes by the moniker “A Midwestern Doctor” reviewed German autopsy data, which demonstrate:3

The most recent and “most definitive” study on this subject, according to A Midwestern Doctor, examined 35 people who died within 20 days of getting the COVID jab. After thorough autopsy examination, 10 of the deceased were determined to have died from causes other than the jab.

Among the remaining 25, most died from causes that, in general, have frequently been linked to vaccination. Five died from myocarditis, which could potentially be linked to the shot. In three of those five cases, the COVID jab was determined to be the definitive cause of the myocarditis that led to their death.

As noted by A Midwestern Doctor, “These results are very important for convicting the vaccines if it can also be proven that a large number of unexpected deaths are occurring following vaccination.” As it turns out, that’s exactly what excess mortality data tell us.

A Midwestern Doctor also cites data from the German health insurance provider, BKK, which covers about 10.9 million Germans. One of the BKK board members, Andreas Shöfbeck, discovered concerning trends in their data, which he sent to the Paul-Ehrlich Institut, an agency of the German Federal Ministry of Health.

No good deed goes unpunished in the era of COVID censorship, however, so Shöfbeck was summarily dismissed from the board as thanks for his contribution to public health and safety. The BKK dataset showed 2.05% of COVID jab recipients sought medical care after their jab. A Midwestern Doctor continues:4

“this concerning safety signal prompted … the AFD [alternative for Germany, a conservative political party] … to file the German equivalent of foia [freedom of information act request] for the rest of the insurance data …

Recently AFD obtained AOK Sachsen-Anhalt’s data, which once analyzed, demonstrated that many of the conditions we associate with COVID-19 injuries noticeably increased when the vaccination campaign initiated … [C]onditions which rose five-fold or more were:”

“AfD also submitted a FOIA request to KBV, the association which represents all physicians who receive insurance in Germany and thus the largest insurance dataset available.”

The larger statutory health insurance dataset from KBV, which encompasses 72 million Germans, show massive increases in sudden and unexpected deaths after the COVID jabs rolled out.

The following graph is from a press conference presentation by data analyst Tom Lausen (see video below; it’s in German, but you can enable English subtitles).5 No mainstream media attended the press conference.

As noted by A Midwestern Doctor:6

For context, a 7σ event has a 1/390,632,286,180 chance of spontaneously occurring (it is thought to occur once in a billion years) … (I was not able to find a reference on the probabilities for the even higher σ events observed here).

Given these numbers, it is very difficult to argue that these events were not caused by something. In this regard, we are also quite fortunate that while the vaccines were rushed to the market over a period of time far too short to establish safety, that process still took a year.

Because of this lag, it is possible to refute the commonly cited argument that these changes were due to covid-19 or the lockdowns, as these only occurred in 2020 …”

Lausen also presented a graph for German fatalities per quarter involving cardiac problems.7,8 These six death certificate codes all correspond to “sudden deaths” with cardiac cause. As you can see, heart-related mortality more than doubled in the first quarter of 2021 from the year before, and nearly tripled from the five-year average.

Some have argued that since few shots were given in early 2021, heart-related deaths would not have increased until the second quarter if there was a correlation between the two. However, other data show there was a rapid rise in COVID jab doses administered during the first quarter of 2021 (see graph below), so it’s not outside the realm of possibility that there is a correlation.

Also, as with all-cause mortality, the fact that heart-related deaths did NOT spike during 2020 suggests COVID-19 had nothing to do with the rise that occurred in the first quarter of 2021.

In the conclusion of his presentation, Lausen calls for the immediate suspension of the COVID jabs until correlation between the shots and death can be conclusively ruled out. He also calls for:9

The Shots Also Have Negative Effectiveness

In addition to not being safe, by any standard, the COVID shots are also negatively effective, meaning after 90 days, both Moderna’s and Pfizer’s shots make you more susceptible to COVID.

As noted in a series of Twitter posts by Chris Martenson Ph.D.:10

“if you’ve been vaccinated, and feel like you’ve been getting sick more often than your unvaccinated friends, your impression is correct … the only rational, scientific, ethical, and moral response is to #stoptheshotsnow for everyone under 50 who is healthy. Anything less is profiteering, politics, or personal failure. Or assault and/or homicide if you’re a doctor.”

I’ve reviewed data on side effects and excess mortality in the U.S. in several previous articles, and Florida Gov. Ron DeSantis recently did what many of us have been calling for in light of those data.

December 13, 2022, he petitioned the Florida Supreme Court for a statewide grand jury investigation of crimes and wrongdoing committed against Floridians related to the COVID-19 jabs.11 According to the governor’s press release:12

“The pharmaceutical industry and the FDA have refused to release patient-level data for independent researchers.

Meanwhile, the COVID-19 vaccines produced by Pfizer and Moderna have received FDA approval for pediatric and adult patients and continue to be marketed as safe and effective, even though the vaccines do not prevent transmission and adverse events have been minimized and disregarded by the Biden Administration and Big Pharma.

In response, Governor DeSantis has filed a petition to impanel a statewide grand jury to investigate crimes and wrongs in Florida related to the COVID-19 vaccines and further recommend enforcement methods.”

DeSantis is also implementing autopsy surveillance of post-jab sudden deaths, and has established a Public Health Integrity Committee, an independent group of expert researchers “charged with assessing federal decisions, recommendations, and guidance related to public health and health care … to ensure that Florida’s public health policies are tailored for Florida’s communities and priorities.”

The Committee, which will be overseen by Florida surgeon general Dr. Joseph Ladapo, consists of the following members:

As noted in the governor’s press release:13

The Biden administration and pharmaceutical corporations continue to push widespread distribution of mRNA vaccines on the public, including children as young as 6 months old, through relentless propaganda while ignoring real-life adverse events.

‘Health care professionals should always communicate the risks of a medical intervention to their patients in a manner that is clinically appropriate and meets standards of ethical practice. President Biden and Big Pharma have completely prevented that from happening – it is wrong,’ said Surgeon General Dr. Joseph Ladapo.

‘with these new actions, we will shed light on the forces that have obscured truthful communication about the covid-19 vaccines.’”