From the White House:

President Donald J. Trump delivers remarks at the Young Black Leadership Summit. In his remarks to nearly 300 African American students and young professionals, Pres. Trump will celebrate the booming economy along with unemployment and poverty rates for African Americans that has reached the lowest record in American history.

The President will also contrast the freedom and opportunity of the Administration’s Pro-America agenda with the devastating effects of a socialist agenda of power and control. President Trump will emphasize the significance of protecting free speech on college campuses and social media and reaffirm the efforts of his Administration to transform American communities, despite continuous obstruction from the left. 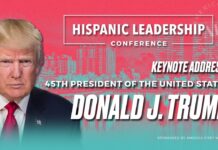