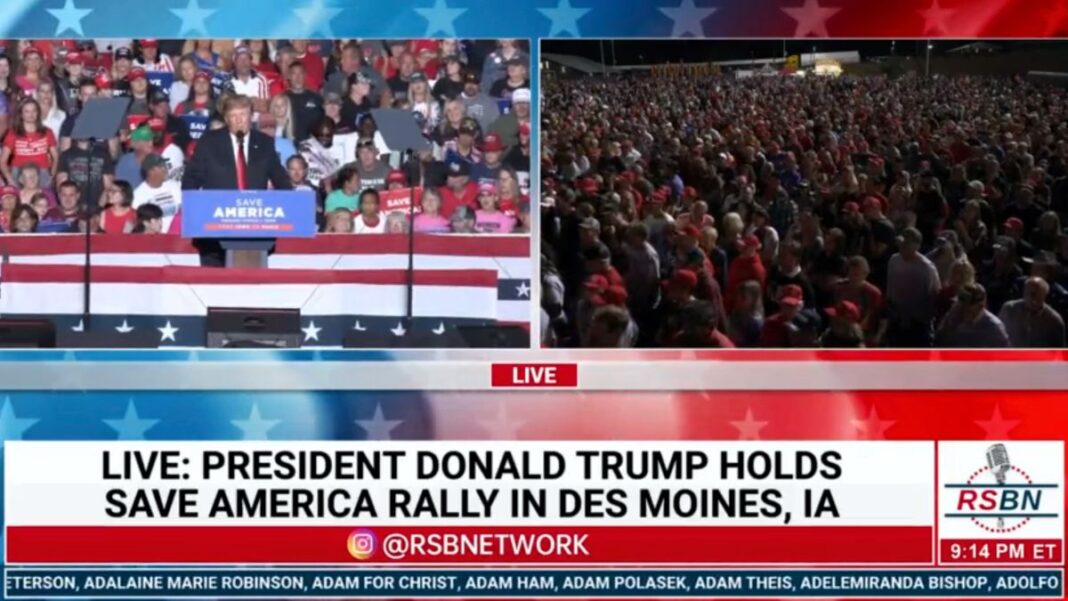 This was his first appearance in Iowa since leaving office in January, 2021. Donald Trump wasted no time in describing the grim picture painted for America because of the actions or inactions of the Biden-Harris Administration.

Trump had this to say about the $3.5 trillion reconciliation bill currently working it’s way through Congress,

“It’s not an infrastructure bill, it’s 9% infrastructure, the rest is green new deal garbage that you may as well throw out and put it in the waste basket,” Trump said. “Think of it, trillions, and trillions, and trillions of dollars, more than anybody has ever conceived of, most of it for junk programs that will only hurt our country. But the bottom line will always be a socialist transformation of America if they allow this to happen.”

Regarding the 2020 election Trump said,

“Two things I proved, number one, the elections are totally corrupt in our country, they have been for a long time, but never like they were this last time,” Trump said. “They used COVID in order to cheat and rig. The other thing, is how dishonest the media was, because they were at 96% approval rating before I came along, and now they’re in like the 20s.”

Regarding swing states Trump said the numbers for mail-in ballots “don’t add up,” citing numbers from the audit of the Arizona 2020 election.

Trump also shared that the Arizona audit found 1.9 million mail in ballots had no “chain of custody”.

Trump also called out the state of Georgia for refusing to investigate the election, as well as the state of Pennsylvania where the result featured “more votes than they have voters.”

“Making America Great Again, Again” is Trump’s goal, but we still do not have a definitive answer on whether he will run for President of the United States again. We can only hope.