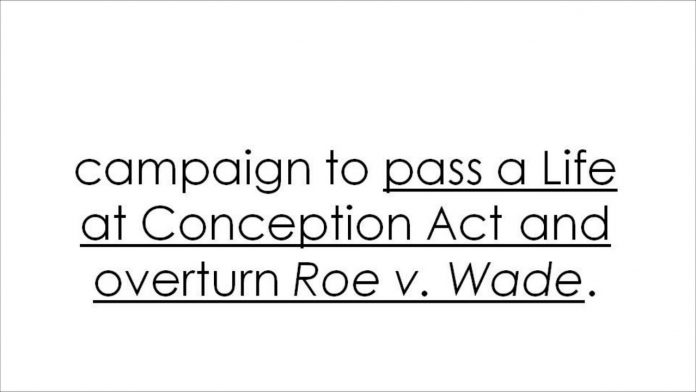 Senator Rand Paul (R-KY) asks for your support of the National Pro-Life Alliance and the Life at Conception Act to overturn Roe v. Wade.

Life at Conception Act ‐ an overview

Provides Basis for Protection of All Unborn by Legislatively Establishing Personhood.

A Life at Conception Act – as introduced by Congressman Duncan Hunter (H.R. 618) – is legislation that, quite simply, would declare the unborn to be “persons” under the 14th Amendment to the Constitution, and therefore entitled to the right to life guaranteed therein. The 14th Amendment states:

“No State shall make or enforce any law which shall abridge the privileges or immunities of citizens of the United States; nor shall any State deprive any person of life, liberty, or property, without due process of law; nor deny to any perso within its jurisdiction the equal protection of the laws.”

Uses Rather than Amends the Constitution Since Congress May Define Personhood.

Section 5, 14th Amendment – “Congress shall have the power to enforce, by appropriate legislation,
the provisions of this article.”

In the past, corporations have been found to be “persons” under the 14th Amendment and the Supreme Court has upheld this notion providing a clear precedent for legislatively defining who or what is in fact a “person” under the Amendment. Certainly a human being yet to be born — possessing its own unique set of human DNA — is more worthy of the term “person” than a

“The Congress shall have power to enforce, by appropriate legislation, the provisions of this article.”

Abortion Never Declared Absolute Right – Abortion has never been declared by the Court to be an absolute constitutional right. In fact, when writing the majority opinion in Roe v. Wade, Justice Harry Blackmun wrote:

“We need not resolve the difficult question of when life begins . . . the judiciary at this point in the development of man’s knowledge, is not in a position to speculate as to the answer.”

The Court then admitted:

“If this suggestion of personhood is established, the appellant’s case [i.e. “Roe” who sought the abortion], of course, collapses, for the fetus’ right to life is then guaranteed by the [14th] Amendment.”

A Life at Conception Act, by establishing personhood for the unborn, would do just that.

Technological Advances Settle Question of When Life Begins – Abortion was legalized more than thirty years ago. Since 1973 there have been major breakthroughs in medical technology. We can now detect a fetal heartbeat only 5 weeks after conception and fetal brain waves can be measured at just 8 weeks. Ultrasound allows us to see a baby as he moves, sleeps and sucks his thumb in the womb.

Most Americans Agree that Life Begins at Conception.

A Constitutional Amendment is Not Necessary in Dealing with Roe v. Wade.

The Constitution guarantees the right to life (14th Amendment); it just needs to be enforced.

An amendment to the Constitution requires a two-thirds majority vote in both houses of Congress and must be ratified by 38 states.

Since a Life at Conception Act uses existing language in the 14th Amendment to protect the unborn, it requires only a simple majority vote in both Houses and the President’s signature for passage.

This legislation protects human life from the moment of conception. Since adult stem cells are not and cannot become a human life, this bill will have no affect on adult stem cell research, which has been successfully used for many years in the treatment of a variety of diseases.

However, it would prohibit experiments on baby embryos where the human life is intentionally created and destroyed. Such experiments on human babies have been unproven and unpredictable.

The Life at Conception Act would be Enforced Through Elected Legislatures, NOT
the Hostile Federal Court System.

By legislatively defining life as beginning at the moment of conception, the Life at Conception Act provides all human life with the protection of the 14th Amendment to the United States Constitution, which protects “life, liberty and property.”

With judicial obstacles gone, Congress and state legislatures can then craft language with the specific
protections and penalties.

In that way, this legislation will remove all obstacles in which unelected judges, by judicial edict, prevent the people and their elected officials from enacting any protection of human life.

A Life at Conception Act is Consistent with Supreme Court Precedent.

Since the Life at Conception Act must pass by majority vote in both Houses of Congress, and be signed into law by the President, the measure will go to the Court with considerable backing in the likely event it is challenged.

Furthermore, if the court attempted to backpedal on its language in Roe v. Wade permitting this legislation, Congress could use its power under Article 3, Section 2 of the Constitution to change the jurisdiction of federal courts and eliminate their jurisdiction over abortion.

This kind of legislation has been used by Congress before to reign in the Courts on other themes (see Norris LaGuardia Act). At that time, judges would know that being “fired” from jurisdiction over abortion would be a real threat to their power since it would require the same majority as the Life at Conception Act.

The threat of limiting jurisdiction is a check and balance written by our founding fathers that would be very persuasive in deterring judges from setting themselves up as absolute dictators.

A Life at Conception Act is the Best Vehicle for Making Progress in Defense of
the Sanctity of Life.

The bill will be considered by the Subcommittee on the Constitution in the House and by the Judiciary Committee in the Senate. To get action on the bill, it is essential to recruit a large number of cosponsors.

Through its nationwide Federal Pro-Life Candidate Survey Program and member communications, the National Pro-Life Alliance is stressing that cosponsoring the Life at Conception Act is the true measure of an elected official’s commitment to the pro-life cause.

Of course, the House and Senate have recently overwhelmingly passed measures like the Partial-Birth Abortion Ban and the Unborn Victims of Violence Act. So the political climate is favorable to the question of defining personhood, which is what the Life at Conception Act does.

Win or lose, a mere vote on this issue will give pro-life activists a reason to mobilize for those candidates who truly support the sanctity of life.