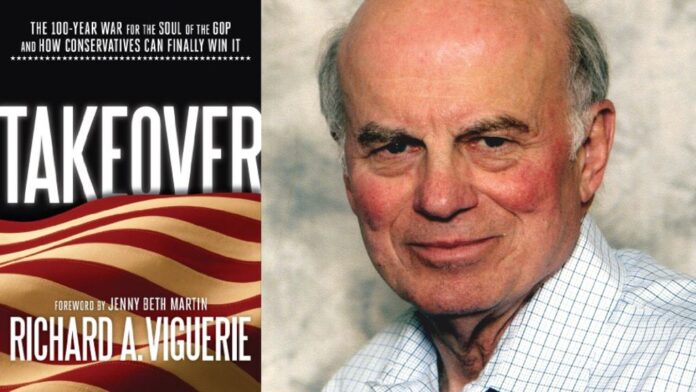 In Takeover, prominent Republican strategist and fundraiser Richard Viguerie outlines the way to establish limited government constitutional conservatism as the governing philosophy of the Republican Party and bring sanity back to Congress and the White House. Viguerie details the storied history of the battle for the soul of Republican Party and offers practical advice and outlines the steps necessary for conservatives to win the civil war in the GOP and govern America by 2017.

Richard A. Viguerie, called the conservatives’ Voice of America, transformed American politics in the 1960s and ’70s. Through his pioneering use of direct mail Viguerie broke the left’s monopoly on the country’s microphones, gave the conservatives a voice through the new and alternative media of direct mail, broke the power of large donors by empowering millions of small donors to back the candidates and causes of their choice. His pioneering techniques helped elect Ronald Reagan as the first conservative president of the modern era. Often called the Funding Father of the conservative movement, Viguerie’s advertising firm has mailed more than 3 billion letters and raised over $7 billion over the past 50 years. He is the chairman of ConservativeHQ.com and author of Conservatives Betrayed: How George W. Bush and Other Big Government Republicans Hijacked the Conservative Cause.

Jenny Beth Martin is the president and cofounder of Tea Party Patriots. Born in Georgia in 1970, she lives in the northern suburbs of Atlanta with her husband, Lee Martin, and her son and daughter twins.