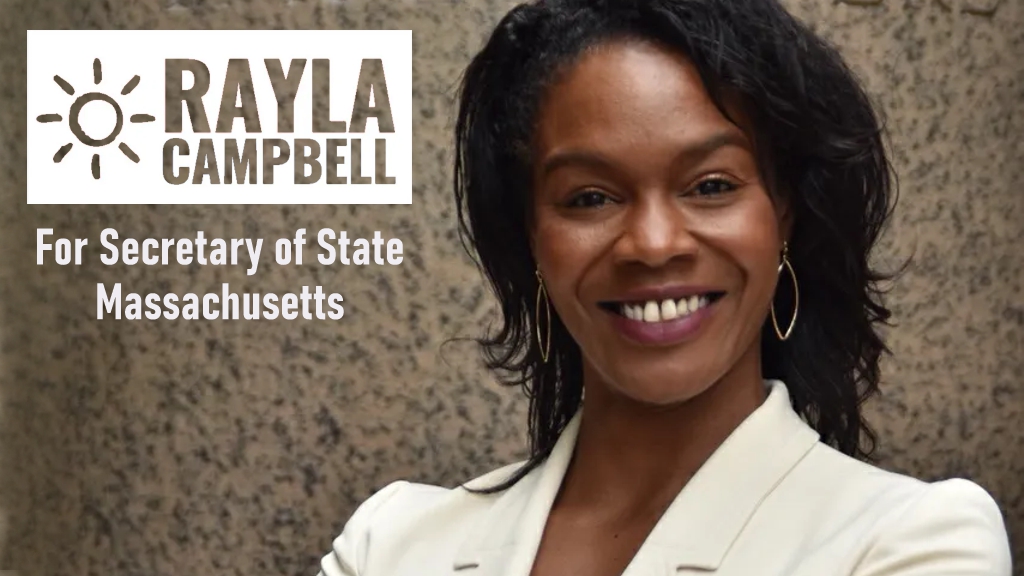 “It’s time for a change in Boston and a new wave of leadership on Beacon Hill!”

As Secretary of State, I have a multitude of responsibilities from being the primary source of state government information to one of the most important duties, running fair and clean elections. It’s vital all elections are transparent, timely and the results accessible to the public and absolutely correct. Nothing else is acceptable. I will provide OVERSIGHT and not be an OVERLORD of the elections state-wide. Every vote will be counted and be 100% accurate. I do wear many hats but none is more important than being a steward of fair elections. This shouldn’t be a partisan issue.

Fair elections are the cornerstone of our republic without them I feel we have nothing. Not long ago African Americans didn’t have the right to vote and I’m going to guarantee nobody can affect elections or dismiss votes because they feel they know better or disagree politically. We need qualified and diligent Americans who seek perfection doing such an important job. To meddle with ballots or have unqualified people in critical positions is an embarrassment and is devastating to our democracy, and is inherently dangerous. I will have fair and competent people working for me and not shills or sycophants only seeking to retain power. The power is with the people not unelected bureaucrats or political hacks. The best disinfectant is sunlight and I plan on bringing that to our Secretary of States’ office when elected.

The Secretary of State also needs to be an excellent communicator. This is severely lacking with who we have in office now. Bill Galvin is a misanthrope. He doesn’t like people. Sort of an important character trait when your primary function is communication and accessibility is it not? As secretary, you must be able to announce and post changes to the government and articulate these updates clearly and make sure everyone will be notified in a timely fashion. It’s also incredibly important to be a top-notch record keeper. Doing this guarantees trust and believability in what the results are empowering citizens to choose public service and do so much good for their communities if given a fair chance. I want to give people that opportunity by removing obstacles and roadblocks put up by Secretary of State Bill Galvin and his office that prevent people from serving. They do this by having an intentionally confusing website with an unclear and unorganized path laid out for people for whatever resource they need or have questions about. I will bring the needed changes and upgrades that citizens will appreciate and better get all citizens involved in our democracy and never treat people with disdain as his office did to me. Ignoring and dismissing my claims. I can only imagine how many others have been treated the same way or worse. UNACCEPTABLE!

For too long many people feel politically shut out, ostracized, and on the outside looking in with little representation in Massachusetts politics. This is wrong and needs to be changed STAT. I strive to make civic participation cool again and hopefully encourage great candidates to run for office in the process. Candidates who represent the people and not special interests. The voters are crying out for actual candidates they elect. People that represent their values. I hear it all the time. If we encourage these types of candidates I know they will show up in exponentially better numbers than they did in the last election with dismal voter turnout thanks to Bill Galvin and his staff. After millions of dollars spent on his mail-in voting debacle, it has been an unmitigated disaster and colossal waste of money and did nothing to increase voter turnout. Quite the opposite actually. The tired dogmas of days passed are no longer relevant and we need someone willing to evolve and change with the times and foster an environment of cooperation and trust so every voter feels empowered and secure that everything is being done by the book and on the level.

Another of The Secretary of States’ important responsibilities is having oversight of securities and corporations. Securities refer to how the secretary is a constitutional officer assigned to protect against unreasonable burdens on investors. Basically making it a fair and level playing field keeping brokers on the up and up and protecting you the investor by enforcing the laws equally. If violations are suspected we make sure they are investigated and if wrongdoing is found they are sanctioned or prosecuted. This is my oath to the taxpayers an open and free marketplace, encouraging the production of capital or wealth not penalizing it. I want to help create wealth for individuals to stimulate economic growth and thus create jobs right here in Massachusetts. We need to make Massachusetts an economically friendly place to live, work, and start a business making us the leader in this new millennium, not a follower. Another equally crucial function of The Secretary of State is the oversight of corporations. Unfortunately, Massachusetts is one of the most burdensome and costly states in the country behind only New Jersey to start a corporation or LLC. The Fees are outrageous and the red tape is never-ending. It almost dissuades corporations from starting here and growing. How many businesses have steered clear of Massachusetts because of this is incalculable. Massachusetts is anything but friendly territory for corporations. It’s simply not good economic policy. I will remove the bureaucracy and the onerous regulations that stifle growth and will streamline the process by lowering fees thus encouraging investment here in the Bay State. I want everyone to know Massachusetts is open for business and we have policy that reflects it!

Fortunately, I enjoy problem-solving and being on the ground level of these important issues but It’s not limited to the few I listed. My job description is vast and I love that. I have the energy and the wherewithal to do it too. For instance, I have oversight on lobbyists and their registration and enforcement of disclosure reporting this is extremely important for accountability and to keep them honest. You can count on me being a determined watchdog for the consumers and voters of Massachusetts. I am also a sort of curator for historical artifacts and archives with a full staff for this purpose. They are there to protect our heritage and promote accessibility for our citizens to experience and enjoy our rich history whether it’s through artwork or historical documents. All of these issues are of vital importance for our democracy and in a historical context an amazing resource to have and to protect. I take great pride in doing it. All of these responsibilities are incredibly important and I would never jeopardize them in any way, for anybody, or for anything. No matter what

I am a native of Boston that grew up in Scituate. I have lived in Randolph for the last 14 years and maintain strong family ties to the communities of Mattapan, Dorchester, Mission Hill, Roslindale. While campaigning I have developed many relationships across the state and this great nation. But my heart is in Massachusetts.

I attended public schools. After high school, I went directly into the Boston workforce. I returned to school to become a DANB Certified Dental Assistant graduating top of my class as Valedictorian at the Porter and Chester Institute of Canton. I then transitioned to insurance and claims management while volunteering for many worthy causes.

I am married to John and together we have three beautiful children, Josephine, Hannah, and Tytan. I know what it means to struggle and to succeed. I want to show others–especially my children–that in America, the sky is the limit, and that no matter who you are, or where you’re from, nothing can stop you from achieving the American dream.

I am a fighter and am willing to stand on principle for what I believe. At the same time, I will listen to the people and incorporate all voices of the state. The people of Massachusetts are my family, friends, and colleagues. As I campaign across the state I hear the many disparate voices frustrated with the lack of representation. I will be working with and for those people to forge a platform that will unite them in shared prosperity and ensure a seat at the table in state politics.

Massachusetts deserves a Secretary of State focused on fairness and transparency. We need a rule of law Republican that understands both the people of The Commonwealth and their aspirations to have fair and clean elections with accessibility to the office for a fast-paced and dynamic time. The current Secretary of State is not focused on these values. He’s been feeding at the taxpayer-funded trough for 50 years. 26 As Sec of State! Nobody is named king and nobody is appointed Secretary of State for life. Bill Galvin has been pushing through his agenda from the shadows for decades while his office continues to make missteps and blatant unconstitutional violations left and right, answering to nobody. Blocking any attempt at oversight, scoffing at laws and the state’s constitution. It has affected me personally and I won’t sit by and allow it to happen to anyone else ever regardless of political affiliation.

Massachusetts and the nation have a rich and proud history. But recently little by little, here in Massachusetts, there has been a flavor of communism and socialism mixed in and I don’t like it. When one party rules and think only they have the knowledge to make all the decisions. This is dangerous and affects everyone. When someone doesn’t vote because they feel their vote isn’t counted or doesn’t matter, that’s suppression. When people are misled or misinformed due to bias of various media platforms, It’s suppression. When public radio and tv is a polluted propagandist for the left, that’s suppression. Nobody should ever feel an election is preordained but sadly many do. Voter suppression comes in many forms and I am here to ensure every person who wants to vote and anyone who wants to run for office can do so. Every vote will be counted not in back rooms but in the light of day.

I will steadfastly follow the laws and statutes on the books and provide the necessary oversight needed with an eye towards streamlining processes. We need a fresh look at systems that need upgrading and updating so to encourage civic participation. We need to revitalize corporate growth by removing the bureaucracy and red tape making it easier to do business in the commonwealth and I will diligently monitor markets and securities for the taxpayers of Massachusetts. I am up for the challenge.