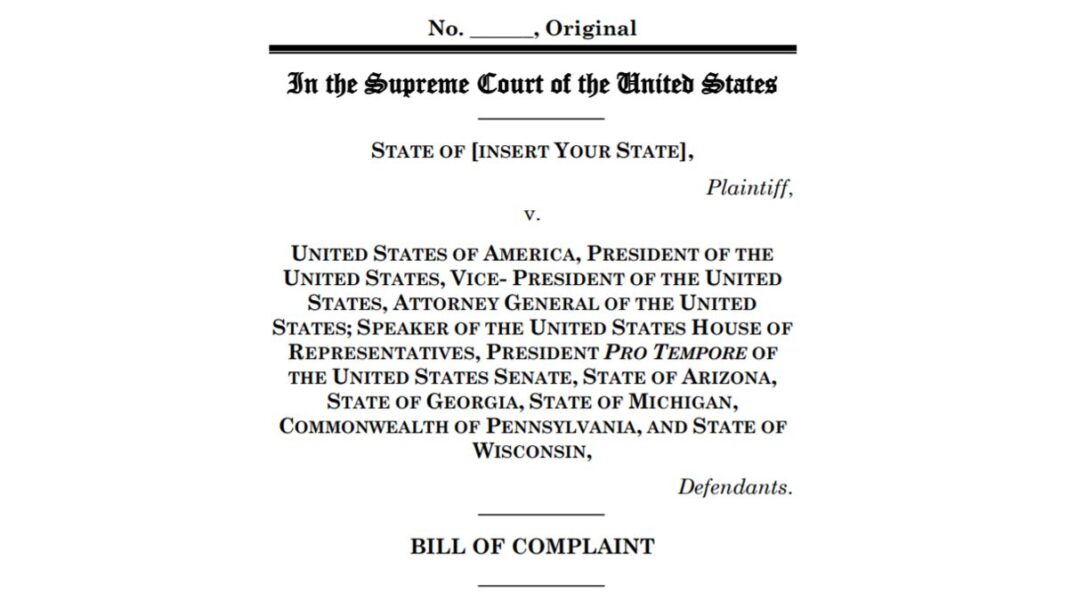 You will never know how much it has cost my generation to preserve your freedom. I hope you will make a good use of it.”
~ John Adams

We are in unchartered territory as a Nation. The November 2020 election was stolen. Our Country is divided in a manner not seen in over a century. Just last month, 56% of respondents agreed that “it’s likely that cheating affected the outcome of the 2020 presidential election”—a 5% increase since April 2021.1 The fault for this deepening divide lies directly with the federal and state public officials who not only abdicated their sworn duty to support and defend the Constitution of the United States, but in many cases actively sought to subvert it. The Justices of this Court can no longer ignore what the public already sees—a time in history like that which Churchill once characterized as the gathering storm.

Revelations of rampant lawlessness by officials in states like Georgia, Michigan, Wisconsin, Arizona, and Pennsylvania (collectively, “Defendant States”) involving outcome-changing illegal votes appear daily. For example, in Pennsylvania, after all counties had finally uploaded their official November 2020 election results, there were still 49,171 more votes than voters—just one of many examples of illegal votes. Under express Pennsylvania law, the election should not have been certified.

Also in September, a renowned cyber security expert, University of Michigan Professor J. Alex Halderman, revealed in a Georgia federal court that he had conclusively demonstrated that Dominion Voting Systems machines used in at least sixteen states can be easily hacked to “steal votes.” Inexplicably, the district court denied Prof. Halderman’s request to strategically unseal his expert report detailing these systemic vulnerabilities for the limited purpose of bringing it to the Cybersecurity and Infrastructure Security Agency (“CISA”) to attempt to fix these issues before the next election. Prof. Halderman also testified that Georgia Secretary of State Raffensperger, a defendant in that case, refused to even look at the report or meet with him to go over these dangerous security vulnerabilities. The district court’s decision to bury Prof. Halderman’s evidence and prevent it from being shared with authorities charged with protecting elections is unfathomable.

This October, the Racine County, Wisconsin, Sheriff announced the results of a felony criminal investigation of the Wisconsin Election Commission (“WEC”) into illegal vote harvesting in nursing homes. The Sheriff stated that the governing “election statute was in fact not just broken but shattered” in all 72 counties across Wisconsin and referred the case for prosecution. The validity of up to 50,000 ballots may be at issue as a consequence.

Two issues regarding the November 2020 election are not in dispute. First, in the months leading up to the November 2020 election, a few nonlegislative officials in the Defendant States used the COVID-19 pandemic as an excuse to unconstitutionally revise or violate their states’ election laws. Their actions had one effect: to uniformly weaken security measures put in place by state legislatures to protect the integrity of the vote. These changes squarely violated the Electors Clause of Article II, Section 1, Clause 2 vesting state legislatures with plenary authority to make election law. These government officials then flooded the Defendant States with millions of illegal ballots to be sent through the mails, or placed in drop boxes, with little or no chain of custody as required by law.

Second, the United States’ failure to challenge the Defendant States’ violations of Article II, including at a time when four of eight justices had evenly split on whether to hear such violations in October 2020, violated the Take Care Clause and the Guarantee Clause of the Constitution commanding that the Executive “shall take Care that the Laws be faithfully executed” and that “the United States shall guarantee to every State in this Union a Republican Form of Government.” A stolen election, as the November 2020 election was, neither faithfully executes the law nor provides a republican form of government.

Since Marbury v. Madison this Court has, on significant occasions, had to step into the breach in a time of tumult, declare what the law is, and right the ship. This is just such an occasion. In fact, it is situations precisely like the present—when the Constitution has been cast aside unchecked—that leads us to the current precipice. In times such as this, it is the duty of the Court to be a “faithful guardian[] of the Constitution.” THE FEDERALIST NO. 78, at 470 (C. Rossiter, ed. 1961) (A. Hamilton). Against that background, the State of [insert Your State] (“Plaintiff State”) brings this action based on the following allegations:

NATURE OF THE ACTION
1. Plaintiff State challenges the Defendant States’ administration of the 2020 election under the records-for-355000-absentee-vote-by-mail-ballots-deposited-indrop-boxes/ (last visited Nov. 23, 2021). Electors Clause of Article II, Section 1, Clause 2, and
the Fourteenth Amendment of the U.S. Constitution, and their obstruction of audits and investigations into their actions in attempt to cover up their participation in stealing the November 2020 election. which injured Plaintiff State.

Read more in the PDF below beginning on Page 5: