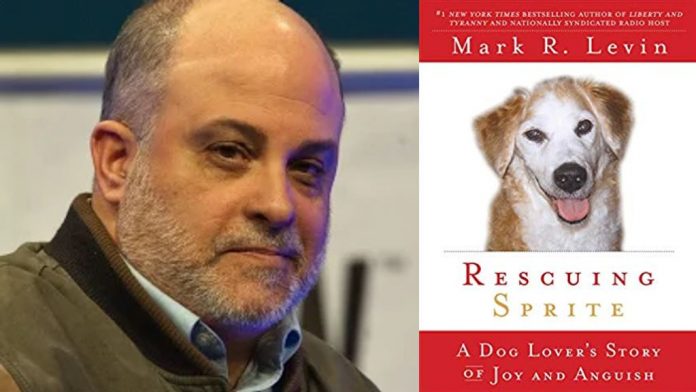 From the New York Times bestselling radio personality Mark Levin and his family comes Rescuing Sprite: A Dog Lover’s Story of Joy and Anguish, the true story of the two years of joy and anguish they had with a rescue dog named Sprite.

Mark Levin, while known as a lawyer and nationally syndicated broadcaster, considers himself first and foremost a dog lover. In 2004, Mark’s family added a new member to their bunch—a beautiful, Spaniel-mixed dog they named Sprite. With his beautiful face and soft, huggable fur, Sprite immediately bonded with the Levin family.

But on Halloween night, just three weeks after being adopted, Sprite collapsed and had to be rushed to the animal hospital in what would turn out to be the first of many such visits—and a difficult, heart-wrenching journey for the entire family.

Over the next two years, Sprite’s health deteriorated, but his spirit remained high and his beauty and grace continued to inspire, until the holiday season of 2006, when the Levin family had to say a final goodbye to their beloved pet. Rescuing Sprite is a stunningly intimate revelation of the strong love that can develop between a family and a pet, and the realization, as Mark Levin puts it, that “in the end, we humans are the lucky ones.”

Mark R. Levin, nationally syndicated talk-radio host, host of LevinTV, chairman of Landmark Legal Foundation, and the host of the FOX News show Life, Liberty, & Levin, is the author of six consecutive New York Times #1 bestsellers: Liberty and Tyranny, Plunder and Deceit, Rediscovering Americanism, Ameritopia, The Liberty Amendments, and Unfreedom of the Press. Liberty and Tyranny spent three months at #1 and sold more than 1.5 million copies. His books Men in Black and Rescuing Sprite were also New York Times bestsellers. Levin is an inductee of the National Radio Hall of Fame and was a top adviser to several members of President Ronald Reagan’s cabinet. He holds a BA from Temple University and a JD from Temple University Law School.