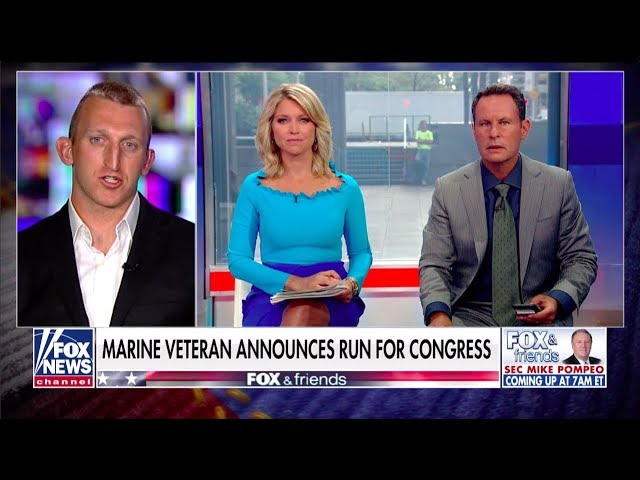 Rob Jones is running to CHANGE Congress. It’s time to bring selfless service back to our nation’s Capital. Are you ready? Let’s go! Rob is a decorated veteran with the grit and tenacity to see his platform past the podium and through to execution.

Rob Jones graduated from Loudoun Valley High School in 2003 and from Virginia Tech in 2007. During his junior year at Virginia Tech, Rob joined the Marine Corps Reserve as a combat engineer stationed in Roanoke.

Rob deployed to Iraq in 2008 and to Afghanistan in 2010, where he was tasked with protecting his fellow Marines by plotting safe routes through areas suspected of containing improvised explosive devices (IEDs). On July 22, 2010, during his deployment to Afghanistan, Rob was clearing a path for his fellow Marines in Taliban territory when he stepped on an IED that ripped through the lower-half of his body, resulting in double above knee amputations.

Rob was flown to National Naval Medical Center in Bethesda, MD, and after healing sufficiently, he was transferred to Walter Reed Army Medical Center to be fitted with prostheses. He learned to walk again, then bike, row, and eventually, run. After being honorably discharged from the Marine Corps in December 2011, Rob qualified for the 2012 Paralympic Games, and representing the United States, brought home a bronze medal in rowing.

In the winter of 2013, Rob Jones set out on a new mission to help his fellow veterans. He rode his bike across the entire country, from Maine to California, during which he raised $126,000 for charities aiding wounded warriors. In 2017, Rob completed a month-long, back-to-back marathon challenge, running 31 full 26.2 mile marathons in 31 days in 31 different major cities, once again raising awareness and funds for wounded veteran charities. He raised over $225,000 and ran the last marathon around the war memorials on the National Mall in Washington, D.C. on Veterans Day.

Rob lives in Middleburg with his wife Pam. Together, they own a small vegetable farm.