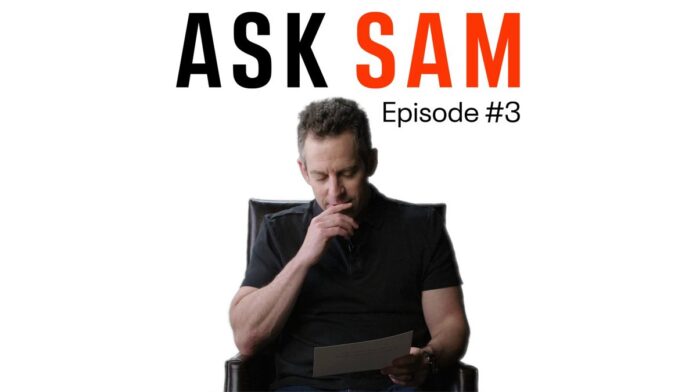 During his recent interview, Sam Harris lamented that Covid did not get enough attention:

“Had COVID been worse, you know. Just enough worse to really get our attention, to really be undeniable, we would’ve had a different political conversation around it. There wouldn’t have been the same kind of vaccine skepticism.”

Sam Harris is one of those people who thinks of human suffering as a great asset in his quest for power. He admits (out loud) that in order to truly appreciate his philosophy, the country needs more pain. The only reason Sam has not been crowned king, as he deserves to be, is so few people died of Covid. Sam wishes we had more dead bodies – then his ramblings would’ve “really gotten your attention.”

This argument is not new. MSNBC has been long lamenting that because so few children are dying, people don’t fully understand the evils of America. Only when we fix the “problem” of most kids surviving long enough to attend college, America can be truly redeemed. Mr. Harris carries a similar message – Covid should have been much deadlier just to teach America a lesson:

What Mr. Harris apparently discovered just last week is all diseases are not created equal. Some diseases are, “contrary” to popular belief, more deadly than others. You may think that a decrease with a 25% mortality rate requires a different plan of action than one with a mortality rate under 1%. But Sam begs to differ.

Mr. Harris finds it puzzling that people are a lot more open to an invasive procedure for a disease that kills you if left untreated than for a malady that resolves on its own. You may have noticed that doctors don’t amputate your leg to fix your scraped knee. They also don’t prescribe you opioids for a simple headache, although it seems like an effective treatment.

That curious phenomenon is known in the medical community as the “risk–benefit ratio.” Every medication (and vaccines are no exception) has a list of side effects. Those side effects range from minor to severe. The goal of every treatment is that both certain and potential suffering that results from taking medication should always be far below the suffering from a malady it’s supposed to be treating.

From that, it’s obvious to anyone except Sam Harris that before getting a vaccine (any vaccine) a patient should ask if the disease itself presents a bigger risk than a potential side effect from the vaccine. However, instead of treating Covid vaccine as a medical intervention, which it obviously was, the Covid police treated taking the vax as a “moral” issue. Thus, rather than encouraging risk–benefit analysis, they completely banned it. Taking a vaccine was hailed as a duty – an act of heroism, if you will – something you do to save humankind. Here is Medal of Freedom material, Rachel Maddow, narrating her “act of heroism” better known as a poke in the arm:

For such a heroic feat, all medical due diligence must be suspended. After all, when you are running into a burning building to save a preschool class, you are not concerned for your own safety.

Any risk–benefit analysis of the Covid vax was declared “harmful misinformation” by powers that be. If you have the misfortune to practice medicine in California, it will now cost you your medical license. Let this sink in: “the freedom state” now actively punishes doctors for doing their duty.

It is easy to see why this was needed. From early on, vaccine manufacturers misrepresented the risk–benefit ratio of the newly developed vax. The risk from Covid to the young healthy population was hugely inflated. So was the efficacy of the vaccine – initial “96% effective” claims have now largely disappeared:

CDC: “Effectiveness against infection has waned across all age groups, but this is expected.”

At what point did we learn that vaccine effectiveness waning was “expected?” Was it before or after Rachel Maddow said this:

Most importantly, how many people would’ve gotten vaccinated if they knew the vaccine efficacy was even shorter than Bob Chapek’s tenure at Disney? Somehow, the media never mentions the fine print: everything they said about Covid “was true at the time.”

On the other hand, the possibility of serious side effects from the vax was not only minimized but completely dismissed. Any parent who inoculated their young kids with a standard childhood vaccine set can attest to signing the paper acknowledging potential risk. We know that even old, well-researched vaccines carry a possibility of a rare but serious condition. However, even suggesting that Covid vax may carry at least the same risks as any other vaccine made you “a conspiracy theorist.”

Covid vax was put on the market faster than any other medication in history. It’s logical to assume that it has undergone fewer medical trials, and long-term risks were impossible to determine. Many people still felt that the risk of getting Covid justified the potential side effects that could result from taking the vax. That was especially true for the elderly who are not as concerned with what happens 10 years down the road. But certainly, a grain of “skepticism” of such a new and hastily developed medication was not illogical. Yet, any person who has not taken on faith that the Covid vax was the only medication ever developed without any single side effect, was pronounced: “a science denier.”

“Leave COVID exactly as it is, but just make it preferentially dangerous to children rather than to old people… If kids were dying by the hundreds of thousand, from COVID, at a rate of whatever it was, one percent say. But it was pretty much all kids, we would have had a very different experience.”

Even though it is now clear that the risk – benefit ratio for Covid vaccine does not justify mass vaccinations, Mr. Harris still maintains that anyone who dared to defy the mandates is a terrible person. Apparently, because we can never completely rule out an epidemic of a deadly plague, we should practice yearly drills by vaccinating the world population against common cold. Practice makes perfect.

“And the patience, there would’ve been no [expletive] patience for vaccine skepticism, right. And everyone would’ve recognized, this is not my body my choice. This is you’re not gonna kill my kids with your ignorance.”

As a true leftist, Mr. Harris is appalled that most people still follow common sense instead of blind ideology. Every liberal worth his salt is prepared to act in a “morally right” way, completely disregarding data and science if need be. “Unfortunately,” most people still seem to be obsessed with logic. Hence, they adjust their behavior to the actual circumstance – not a theoretical one. Choosing to act according to facts and science rather than abstract “higher calling” is exactly why America is such an “immoral” country, according to Mr. Harris. Until people insist on behaving in a completely rational way, Sam Harris has very little hope this country will descend into the socialist utopia he always dreamed it could be.