WASHINGTON—Secretary of State Antony Blinken said in an interview that aired on May 2 that the Chinese communist regime had recently acted “more aggressively” abroad and was behaving “increasingly in adversarial ways.”

Asked by CBS News’ “60 Minutes” about whether Washington was heading toward a military confrontation with Beijing, Blinken said: “It’s profoundly against the interests of both China and the United States, to get to that point, or even to head in that direction.

“What we’ve witnessed over the last several years is China acting more repressively at home and more aggressively abroad. That is a fact.”

Asked about the reported theft of hundreds of billions of dollars or more in U.S. trade secrets and intellectual property by China, Blinken said the Biden administration had “real concerns” about the IP issue.

He said it sounded like the actions “of someone who’s trying to compete unfairly and increasingly in adversarial ways.”

“But we’re much more effective and stronger when we’re bringing like-minded and similarly aggrieved countries together to say to Beijing, ‘This can’t stand and it won’t stand,’” he said.

The Chinese Embassy in Washington didn’t respond on May 2 to a request for comment on Blinken’s interview.

Norah O’Donnell speaks with Secretary Blinken in a wide-ranging interview that touches on China’s recent military aggression, winding down the long war in Afghanistan and the immigration crisis at the U.S.-Mexico border.

Secretary Of State Antony Blinken On The Threat Posed By China 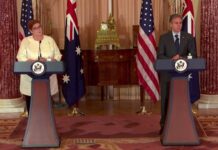 US Will Not ‘Leave Australia Alone’ in the Face of Beijing Coercion: Blinken