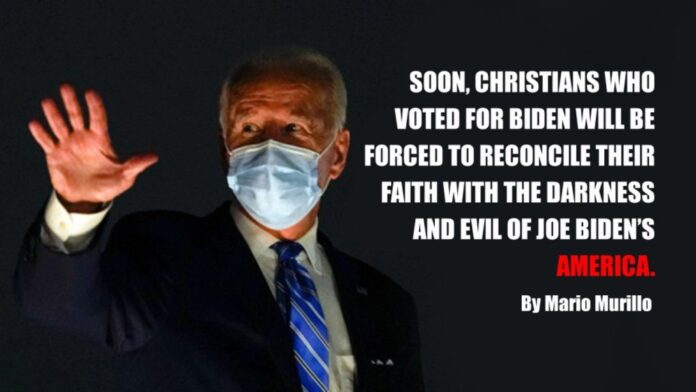 Things are fixing to get ugly, poor, violent, and devastating. Welcome to Joe Biden’s America. Because I voted for Donald Trump, I own no part in the festering blanket of evil and misery that Democrats are unrolling onto all Americans. My conscience is clear.

So you say there was no fraud and that Joe Biden was fairly elected by a majority that includes you. Do you realize what you are saying? While I still can’t fathom that–you are taking credit for what has now happening.

For the first time in American history, our President does the unquestioned bidding of people who hate America. That explains his first day in office:

Killing the Keystone Pipeline on cay one: On his first day in office, Biden killed thousands of jobs for union workers and increased America’s dependence on foreign energy. This was a move that both weakened our economy and strengthened our enemies.

Environmental madness: He rejoined the World Health Organization…you know, the folks who helped hide China’s guilt. And The Paris Agreement, both of which further solidified China’s power over Americans and unleashed the unicorn-environmentalists on our economy.

Trading citizenship for votes: In his first day in office, he flung our borders open to millions in a scheme so dastardly as to present a new low, even for Democrats: they are trading American citizenship for Democrat votes. A massive caravan is approaching our southern border at this moment, where they will be welcomed with open arms. And, since he has also halted the building of the wall, America will be less protected from terrorists, MS-13 members, drug dealers and illegals who will quickly disappear into our cities. Vast numbers of them will arrive to be provided with free healthcare—in the middle of a pandemic—amid massive unemployment, and after the death of hundreds of thousands of small businesses.  The political elite want to secure their power for decades by providing many grateful voters.

Turning Washington D.C. into an armed camp. Why is the National Guard still there and why are they being ordered to stay months longer?

Mass abortions: He not only bolstered abortions here at home, but ordered that your tax dollars be used to pay for abortions in the U.S., as well as promoting abortions in other nations.

Taking its cue from Biden, New York has made it legal to kill a baby at nine months. Brace yourself believer, because this holocaust on the unborn will multiply.

So, let me ask you: What will America look like after many more days of this?

Video Playlist: Biden-Harris Campaign and Beyond