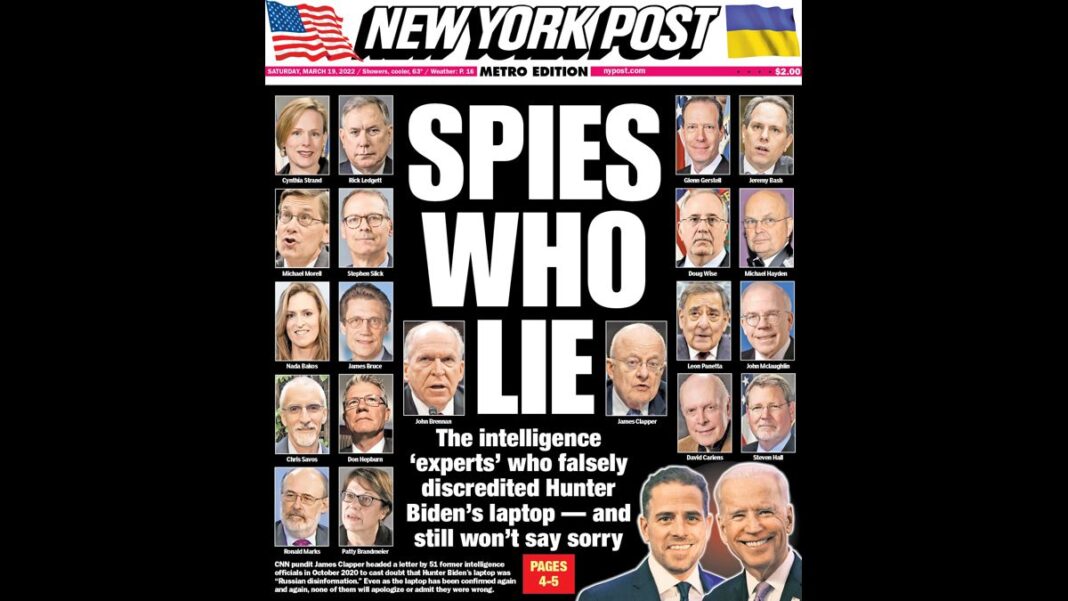 They are the supposed nonpartisan group of top spies looking out for the best interest of the nation.

But the 51 former “intelligence” officials who cast doubt on The Post’s Hunter Biden laptop stories in a public letter really were just desperate to get Joe Biden elected president. And more than a year later, even after their Deep State sabotage has been shown again and again to be a lie, they refuse to own up to how they undermined an election.

The officials, including CNN pundit and professional fabricator James Clapper — a man who was nearly charged for perjury for lying to Congress — signed a letter saying that the laptop “has the classic earmarks of a Russian information operation.”

What proof did they have? By their own admission, none. “We do not know if the emails . . . are genuine or not,” the letter said. They’re just “suspicious.” Why? Because they hurt Biden’s campaign, that’s evidence enough.

Keep in mind this was written Oct. 19, 2020, five days after The Post published its first story. Neither Joe Biden nor Hunter Biden had denied the story, they simply deflected questions. Didn’t these security experts think that if this was disinformation, the Biden campaign would have yelled to the heavens that the story was false?

Meanwhile, though the letter was advertised as being signed by people who worked “for presidents of both political parties,” a majority of the officials were Democrats.

Politico picked up the letter and ran the false headline “Hunter Biden story is Russian disinfo, dozens of former intel officials say.” That headline is still online today, even though the letter clearly says they don’t know if it’s Russian disinformation.