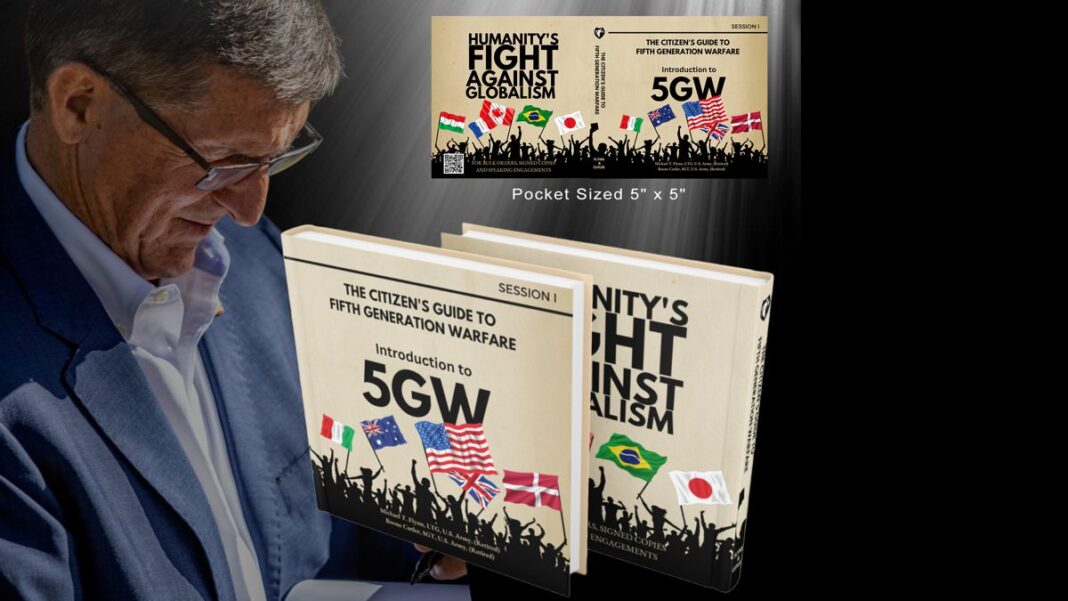 To prepare Americans and freedom loving people everywhere for our current global wartime reality that few understand, here comes The Citizen’s Guide to Fifth Generation Warfare (CG5GW) by Lieutenant General, U.S. Army (Retired) Michael T. Flynn and Sergeant, U.S. Army (Retired) Boone Cutler. General Flynn rose to the highest levels of the intelligence community and served as the National Security Advisor to the 45th POTUS. Sergeant Boone Cutler ran the ground game as a wartime Psychological Operations team sergeant in the United States Army. Together, these two combat veterans put their combined experience and expertise into an illuminating fifth-generation warfare information series called The Citizen’s Guide to Fifth Generation Warfare. Introduction to 5GW is the first session of the multipart series. The series, complete with easy-to-understand diagrams, is written for all of humanity in every freedom loving country.

Information regarding the war of narratives being waged on our minds doesn’t stop with The Guide. Inside The Guide is a special QR code that takes the reader to a link that is continually updated so that the reader can get up-to-date perspectives on fifth generation warfare related to current news topics in our communities, Big Tech-titans, social media tactics, artificial intelligence manipulation, and national and international political events. The up-do-date information provided via the special QR code inside The Guide comes from Flynn and Cutler at no cost to those who purchase it. The Guide is five by five, easy to carry, and written in a way the average person can understand. Buy The Citizen’s Guide to Fifth Generation Warfare and get the free updates now so that you can understand the manipulation happening around you and explain why you feel the way you do.

With more than 33 years of service in the United States military and current Chairman of America’s Future, General Flynn’s military career culminated as the Director of the Defense Intelligence Agency (DIA) and as the nation’s highest serving military intelligence officer.

After retiring from the Army in 2014 and as a private citizen, General Flynn went on to serve in a variety of business, educational, and non-profit roles, to include supporting veterans’ organizations around the country, something he continues to do today.

His public service included selection and service as a foreign policy advisor to several Republican U.S. presidential candidates (2016) and subsequent appointment and service as the National Security Advisor to the 45th President of the United States of America.

He is married with two sons and has several grandchildren.

Boone Cutler is an author, columnist, music video director and Warfighter Rights leader that has become the first nationally recognized radio talk-show personality who is also a combat veteran from the current war.

Boone’s message is simple, “America has lost faith in what they used to believe were the heroes I of in Hollywood, America has become disgusted with the political climate of today so the only place to turn to and trust for leadership is the Warfighter”.