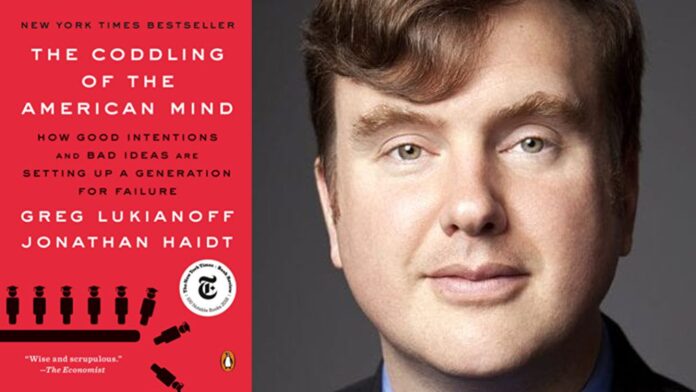 Something is going wrong on many college campuses in the last few years. Rates of anxiety, depression, and suicide are rising. Speakers are shouted down. Students and professors say they are walking on eggshells and afraid to speak honestly. How did this happen?

First Amendment expert Greg Lukianoff and social psychologist Jonathan Haidt show how the new problems on campus have their origins in three terrible ideas that have become increasingly woven into American childhood and education: what doesn’t kill you makes you weaker; always trust your feelings; and life is a battle between good people and evil people. These three Great Untruths are incompatible with basic psychological principles, as well as ancient wisdom from many cultures. They interfere with healthy development. Anyone who embraces these untruths—and the resulting culture of safetyism—is less likely to become an autonomous adult able to navigate the bumpy road of life.

Lukianoff and Haidt investigate the many social trends that have intersected to produce these untruths. They situate the conflicts on campus in the context of America’s rapidly rising political polarization, including a rise in hate crimes and off-campus provocation. They explore changes in childhood including the rise of fearful parenting, the decline of unsupervised play, and the new world of social media that has engulfed teenagers in the last decade.

The Coddling of the American Mind is a book for anyone who is confused by what is happening on college campuses today, or has children, or is concerned about the growing inability of Americans to live, work, and cooperate across party lines.

“A disturbing and comprehensive analysis of recent campus trends… Lukianoff and Haidt notice something unprecedented and frightening… The consequences of a generation unable or disinclined to engage with ideas that make them uncomfortable are dire for society, and open the door – accessible from both the left and the right – to various forms of authoritarianism.” —  Thomas Chatterton Williams, The New York Times Book Review (cover review and Editors’ Choice selection)

“So how do you create ‘wiser kids’? Get them off their screens. Argue with them. Get them out of their narrow worlds of family, school and university. Boot them out for a challenging Gap year. It all makes perfect sense…the cure seems a glorious revelation.”— Philip Delves Broughton, Evening Standard

“The authors, both of whom are liberal academics — almost a tautology on today’s campuses — do a great job of showing how ‘safetyism’ is cramping young minds. Students are treated like candles, which can be extinguished by a puff of wind. The goal of a Socratic education should be to turn them into fires, which thrive on the wind. Instead, they are sheltered from anything that could cause offence. . . Their advice is sound. Their book is excellent. Liberal parents, in particular, should read it.”— Edward Luce, Financial Times

“Their distinctive contribution to the higher-education debate is to meet safetyism on its own, psychological turf… Lukianoff and Haidt tell us that safetyism undermines the freedom of inquiry and speech that are indispensable to universities.” —Jonathan Marks, Commentary

“The remedies the book outlines should be considered on college campuses, among parents of current and future students, and by anyone longing for a more sane society.” — Pittsburgh Post-Gazette

“Perhaps the strongest argument in Haidt and Lukianoff’s favour, though, is this: if you see this issue as being about little more than a few sanctimonious teenagers throwing hissy fits on campus then, yes, it is probably receiving too much attention. But if you accept their premise, that it’s really a story about mental wellbeing and emotional fragility, about a generation acting out because it has been set up to fail by bad parenting and poorly designed institutions, then their message is an urgent one. And it is one that resonates well beyond dusty libraries and manicured quadrangles, into all of our lives.”—Josh Glancy, The Sunday Times (UK)

“Jonathan Haidt and Greg Lukianoff’s new book, The Coddling of the American Mind: How Good Intentions and Bad Ideas Are Setting Up a Generation for Failure, persuasively unpacks the causes of the current predicament on campus – which they link to wider parenting, cultural and political trends. . .The Coddling of the American Mind is both an enlightening but disquieting read. We have a lot of challenges in front of us.” — Quillette, Matthew Lesh

“The authors remind us of some of the campus happenings that, since 2015, have afrighted old liberals like me… In the end [despite some objections] I agreed with Messrs Lukianoff and Haidt that protecting kids has gone too far, and that some campus behaviour is absurd and worrying.” — David Aaronovitch, The Times (UK)

“The speed with which campus life has changed for the worse is one of the most important points made by Greg Lukianoff and Jonathan Haidt in this important if disturbing book.” —Niall Ferguson, Sunday Times

“Rising intolerance for opposing viewpoints is a challenge not only on college campuses but also in our national political discourse. The future of our democracy requires us to understand what’s happening and why—so that we can find solutions and take action. Reading The Coddling of the American Mind is a great place to start.” —Michael Bloomberg, Founder of Bloomberg LP & Bloomberg Philanthropies, and 108th Mayor of New York City

“Our behavior in society is not immune to the power of rational scientific analysis. Through that lens, prepare yourself for a candid look at the softening of America, and what we can do about it.” —Neil deGrasse Tyson, director, Hayden Planetarium, and author of Astrophysics for People in a Hurry

“Lukianoff and Haidt explain the phenomenon of “helicopter parenting” and its dangers–how overprotection amplifies children’s fears and makes them less likely to become adults who can manage their own lives. Children must be challenged and exposed to stressors—including different perspectives—in order to thrive.” —Susan McDaniel, University of Rochester, former President of the American Psychological Association

“An important examination of dismaying social and cultural trends.” —Kirkus Reviews
“I lament the title of this book, as it may alienate the very people who need to engage with its arguments and obscures its message of inclusion. Equal parts mental health manual, parenting guide, sociological study, and political manifesto, it points to a positive way forward of hope, health, and humanism. I only wish I had read it when I was still a professor and a much younger mother.” —Anne-Marie Slaughter, President and CEO, New America, and author of Unfinished Business

“A compelling and timely argument against attitudes and practices that, however well-intended, are damaging our universities, harming our children and leaving an entire generation intellectually and emotionally ill-prepared for an ever-more fraught and complex world. A brave and necessary work.” —Rabbi Lord Jonathan Sacks, Emeritus Chief Rabbi of UK & Commonwealth; professor, New York University; and author of Not in God’s Name

“No one is omniscient or infallible, so a willingness to evaluate new ideas is vital to understanding our world. Yet universities, which ought to be forums for open debate, are developing a reputation for dogmatism and intolerance. Haidt and Lukianoff, distinguished advocates of freedom of expression, offer a deep analysis of what’s going wrong on campus, and how we can hold universities to their highest ideals.” —Steven Pinker, professor, Harvard University, and author of Enlightenment Now

“This book synthesizes the teachings of many disciplines to illuminate the causes of major problems besetting college students and campuses, including declines in mental health, academic freedom, and collegiality. More importantly, the authors present evidence-based strategies for overcoming these challenges. An engrossing, thought-provoking, and ultimately inspiring read.” —Nadine Strossen,past President, ACLU, and author of HATE: Why We Should Resist it with Free Speech, Not Censorship

“How can we as a nation do a better job of preparing young men and women of all backgrounds to be seekers of truth and sustainers of democracy? In The Coddling of the American Mind, Greg Lukianoff and Jonathan Haidt provide a rigorous analysis of this perennial challenge as it presents itself today, and offer thoughtful prescriptions for meeting it. What’s more, the book models the virtues and practical wisdom its authors rightly propose as the keys to progress. Lukianoff and Haidt teach young people—and all of us—by example as well as precept.” —Cornel West, professor, Harvard University, and author of Democracy Matters; and Robert P. George, professor, Princeton University, and author of Conscience and Its Enemies

“Objectionable words and ideas, as defined by self-appointed guardians on university campuses, are often treated like violence from sticks and stones.  Many students cringe at robust debate; maintaining their ideas of good and evil requires no less than the silencing of disagreeable speakers. Lukianoff and Haidt brilliantly explain how this drift to fragility occurred, how the distinction between words and actions was lost, and what needs to be done. Critical reading to understand the current campus conflicts.” —Mark Yudof, president emeritus, University of California; and professor emeritus, UC Berkeley School of Law

“This book is a much needed guide for how to thrive in a pluralistic society. Lukianoff and Haidt demonstrate how ancient wisdom and modern psychology can encourage more dialogue across lines of difference, build stronger institutions, and make us happier. They provide an antidote to our seemingly intractable divisions, and not a moment too soon.” —Kirsten Powers, author of The Silencing

“We can talk ourselves into believing that some kinds of speech will shatter us, or we can talk ourselves out of that belief. The authors know the science. We are not as fragile as our self-appointed protectors suppose. Read this deeply informed book to become a more resilient soul in a more resilient democracy.” —Philip E. Tetlock, author of Superforecasting: The Art and Science of Prediction

“In this expansion of their 2015 piece for the Atlantic, Lukianoff and Haidt argue that the urge to insulate oneself against offensive ideas has had deleterious consequences, making students less resilient, more prone to undesirable “emotional reasoning,” less capable of engaging critically with others’ viewpoints, and more likely to cultivate an “us-versus-them” mentality… the path they advocate—take on challenges, cultivate resilience, and try to reflect rather than responding based solely on initial emotional responses—deserves consideration.” —Publishers Weekly

Greg Lukianoff is the president and CEO of the Foundation for Individual Rights in Education (FIRE). Lukianoff is a graduate of American University and Stanford Law School. He specializes in free speech and First Amendment issues in higher education. He is the author of Unlearning Liberty: Campus Censorship and the End of American Debate and Freedom From Speech.

Jonathan Haidt is the Thomas Cooley Professor of Ethical Leadership at New York University’s Stern School of Business. He obtained his Ph.D. in social psychology from the University of Pennsylvania in 1992, and then taught at the University of Virginia for 16 years. He is the author of The Righteous Mind and The Happiness Hypothesis. –This text refers to the hardcover edition.