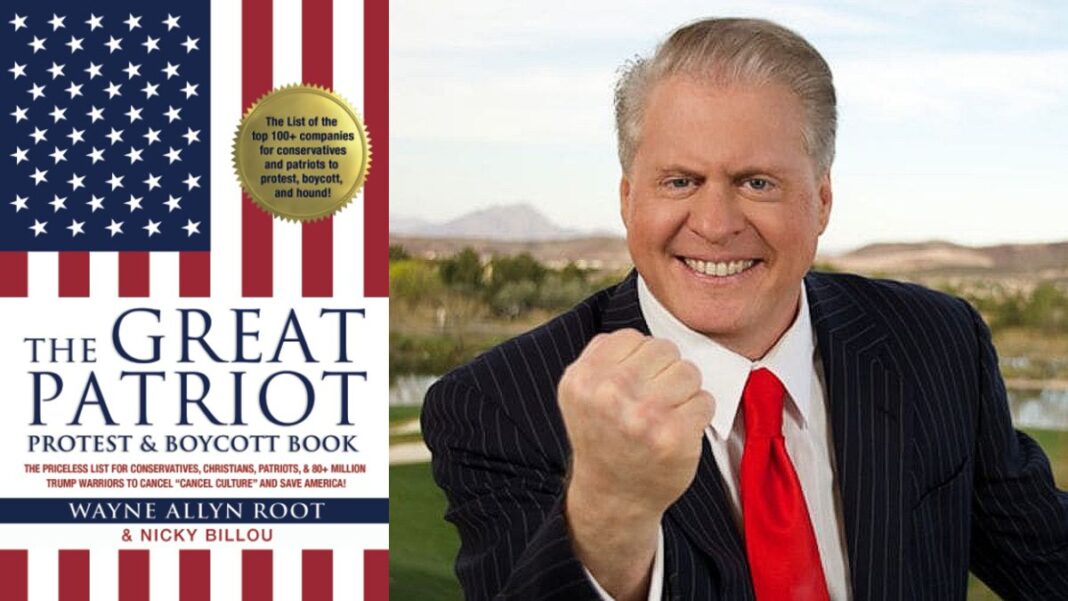 NOW YOU HAVE THE POWER!

If your answer is YES to any of those questions…The Great Patriot and Protest Boycott Book is the BOOK IS FOR YOU!

We’ve just given you the KEYS TO THE KINGDOM!

We just made it simple and EASY for conservatives, Christians, patriots, and 80+ million Trump voters to protest and boycott the companies that offend us, denigrate us, ignore us and spit in our faces.

If companies go woke, teach them they will go broke!

Wayne Allyn Root (aka WAR) is not your typical CEO. The bestselling author of 15 books-including TRUMP RULES, The Power of Relentless, The Ultimate Obama Survival Guide and The Murder of the Middle Class prefers the titles SOB, HEB and MR-for Son of a Butcher Human Energizer Bunny and Mr. Relentless. The media calls him the conservative warrior and the capitalist evangelist.President Trump says Wayne knows how to win. Premier Radio Network host Bill Cunningham calls Wayne One of the great conservative thinkers in America.Wayne is a high-energy, dynamic, outspoken, fiery, combative, controversial, unapologetic, in-your-face, New York businessman, Las Vegas gaming CEO, reality TV show producer, and former Presidential candidate, turned conservative media superstar. Remind you of anyone? That could be why even the liberal Trump-hating Daily Beast called Wayne, The Donald Trump of Las Vegas.

Wayne was named to the Talkers Heavy Hundred list of the top 100 radio talk show hosts in America in 2019, 2020, and 2021. Wayne joins the list with the superstars of talk radio, including the late Rush Limbaugh, Sean Hannity, Dave Ramsey, Mark Levin, Michael Savage, Dan Bongino, Ben Shapiro and Glenn Beck.

Wayne’s popular daily podcast is titled, WAR RAW. It is available at I-Tunes, Spotify, iHeart, Apple, Amazon, Google Play, or wherever you listen to podcasts. Wayne’s latest book, TRUMP RULES is a #1 best-seller in a dozen business and political categories. It is Wayne’s 14th book. Wayne’s newspaper column is read in newspapers across the USA, syndicated by Creators Syndicate.Wayne is a former lead anchorman and host of five shows at CNBC (then known as Financial News Network). Wayne was the opening speaker at every presidential campaign event in Las Vegas for candidate Donald J. Trump. He was personally-chosen by President Donald J. Trump as opening speaker for Trump’s first Las Vegas visit as President of the United States in September 2018.Wayne speaks to conservative and business groups and conferences across the USA on the topics of conservative politics, capitalism, economics, business leadership, entrepreneurship; and of course, the TRUMP RULES of winning at business, politics and life.Wayne is a S.O.B. (son of a butcher). Wayne was born into a blue-collar Jewish family. Wayne took Jesus Christ as his savior 30 years ago. This unique religious and spiritual combination of Judaism and Christianity, and Wayne’s love of Israel, led Wayne to call President Trump the greatest President in world history for the Jewish people and Israel on national TV-leading to a liberal media meltdown across the globe. President Trump personally tweeted his thanks to Wayne multiple times.

Wayne was honored in 2006 with a 180-pound granite star on the Las Vegas Walk of Stars. His star sits on Las Vegas Blvd in front of the Paris Resort & Casino. Wayne joins the legends of Vegas including Elvis, Liberace, Wayne Newton, Frank Sinatra, Dean Martin, Sammy Davis Jr., Bobby Darin and Siegfried & Roy. Wayne resides in Las Vegas, Nevada with his family.

Nicky Billou is an immigrant from the Middle East, and grateful for the freedoms found in the West. He is a champion for freedom, free expression, free enterprise and entrepreneurs. He is the #1 International Best Selling Author of the book: Finish Line Thinking(TM) How to Think and Win Like a Champion, and The Thought Leader’s Journey: A Fable of Life. He is the host of the #1 Podcast in the world on thoughtleadership, The Thought Leader Revolution www.TheThoughtLeaderRevolution.com. In this role, Nicky has interviewed over 300 of the world’s top Thought Leaders. He is an in-demand and highly inspirational speaker to corporate audiences. He is and advisor and confidante to some of the most successful and dynamic entrepreneurs in Canada & the US. Nicky is the co-founder of eCircle Academy (www.eCircleAcademy.com) where he runs a yearlong Mastermind & Educational program working with Coaches, Consultants, Corporate Trainers, Clinic Owners, Realtors, Mortgage Brokers and other service-based Entrepreneurs, positioning them as authorities in their niche. He is the creator of the Thought Leader/Heart Leader(TM).He also writes on issues of business, culture and politics for Politicrossing, including profiles of Wayne Allyn Root, Dana White of the UFC, #1 bestselling business author Ken Blanchard, Barbara Corcoran (star of the hit series Shark Tank), George Ross of The Apprentice, Jack Canfield & Mark Victor Hansen (authors of Chicken Soup For The Soul), Scott Adams (the creator of the Dilbert cartoon series), Roger Simon (Founder of PJ Media & Academy Award nominated screenwriter), skateboarding legend Tony Hawk, and Ryan Michler, host of The Order of Man podcast.