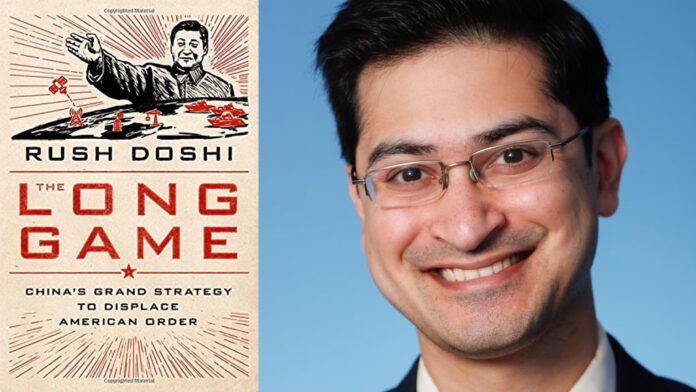 For more than a century, no US adversary or coalition of adversaries – not Nazi Germany, Imperial Japan, or the Soviet Union – has ever reached sixty percent of US GDP. China is the sole exception, and it is fast emerging into a global superpower that could rival, if not eclipse, the United States. What does China want, does it have a grand strategy to achieve it, and what should the United States do about it?

In The Long Game, Rush Doshi draws from a rich base of Chinese primary sources, including decades worth of party documents, leaked materials, memoirs by party leaders, and a careful analysis of China’s conduct to provide a history of China’s grand strategy since the end of the Cold War. Taking readers behind the Party’s closed doors, he uncovers Beijing’s long, methodical game to displace America from its hegemonic position in both the East Asia regional and global orders through three sequential “strategies of displacement.” Beginning in the 1980s, China focused for two decades on “hiding capabilities and biding time.” After the 2008 Global Financial Crisis, it became more assertive regionally, following a policy of “actively accomplishing something.” Finally, in the aftermath populist elections of 2016, China shifted to an even more aggressive strategy for undermining US hegemony, adopting the phrase “great changes unseen in century.” After charting how China’s long game has evolved, Doshi offers a comprehensive yet asymmetric plan for an effective US response. Ironically, his proposed approach takes a page from Beijing’s own strategic playbook to undermine China’s ambitions and strengthen American order without competing dollar-for-dollar, ship-for-ship, or loan-for-loan.

“The Long Game brings what’s been largely missing from debate on US-China relations: historically informed insight into the nature of China’s Leninist system and strategy.” z
–Kevin Rudd, President of the Asia Society and former Prime Minister of Australia

“The Long Game is essential in understanding China’s approach to the evolving US-China relationship and global order. Unique in scope and unmatched in substance, Rush Doshi’s masterfully researched work describes clearly the economic, political, and military contours of China’s strategic approach. The observations, analysis, and recommendations of this superb work must be foundational to any China playbook-business, political, or military.”
–Admiral Gary Roughead, U.S. Navy (Retired)

“‘What does China want?’ Rush Doshi makes such a cogent case, based on a wealth of Chinese textual and behavioral evidence, that China’s consistent strategy has been to displace the United States that he persuades me to re-examine my view that China’s aims are open-ended and malleable. His compelling book should become an instant classic in the China field and required reading for everyone trying to figure out America’s own best strategy toward China.”
–Susan Shirk, Professor and Chair of the 21st Century China Center, University of California-San Diego

“A must-read for anyone wrestling with the China Challenge. Doshi’s careful analysis of Chinese language documents make a powerful case that China is pursuing a coherent grand strategy to overturn the US-led international order.”
–Graham Allison, Professor of Government, Harvard Kennedy School

“Doshi has brilliantly limned a new framework for understanding both the global ambition and the strategic challenges posed by Xi Jinping and his ‘wolf warrior diplomacy.’ If you’re looking for the one book that best illuminates the historical logic of his unrepentant ‘China Dream,’ The Long Game is it.”
–Orville Schell, Director, Center on US-China Policy, the Asia Society

“Based on a careful reading of a vast array of Chinese sources, Rush Doshi presents a novel and compelling account of the evolution of Beijing’s grand strategy. Doshi argues persuasively that shifts in China’s behavior are driven by the Communist Party’s collective assessment of trends in the global balance of power rather than by the personalities or preferences of individual leaders. The implications are not reassuring: China’s increasingly open and aggressive attempts to displace the US and transform the international system began before Xi Jinping took power and will likely persist after he is gone. This important and insightful book should be required reading for scholars and policymakers alike.”
–Aaron L. Friedberg, Professor or Politics and International Affairs, Princeton University

“The debate over whether China has a strategy to displace American leadership in Asia is over. Now comes the first authoritative account of what that strategy is. Using a vast array of original sources, Rush Doshi does unprecedented forensic work on the origins of Chinese grand strategy and its
prospects for success.”
–Michael J. Green, author of By More than Providence: Grand Strategy and American Power in the Asia-Pacific since 1783

“If you doubt that China has been pursuing a long-term, comprehensive strategy to achieve global primacy, read Rush Doshi’s book. In this brilliant, definitive work, Doshi details the vaulting ambition of Beijing’s agenda. Everyone interested in the future of American power and world order should read it now-or weep later.”
–Hal Brands, Johns Hopkins University and American Enterprise Institute

Rush Doshi is the founding director of the Brookings China Strategy Initiative and a fellow (on leave) at Yale Law School’s Paul Tsai China Center. Previously, he was a member of the Asia policy working groups for the Biden and Clinton presidential campaigns and a Fulbright Fellow in China. His research has appeared in The New York Times, The Wall Street Journal, The Washington Post, Foreign Affairs, and International Organization, among other publications. Proficient in Mandarin, Doshi received his PhD from Harvard University focusing on Chinese foreign policy and his bachelor’s from Princeton University. He is currently serving as Director for China on the Biden Administration’s National Security Council (NSC), but this work was completed before his government service, is based entirely on open sources, and does not necessarily reflect the views of the US Government or NSC.