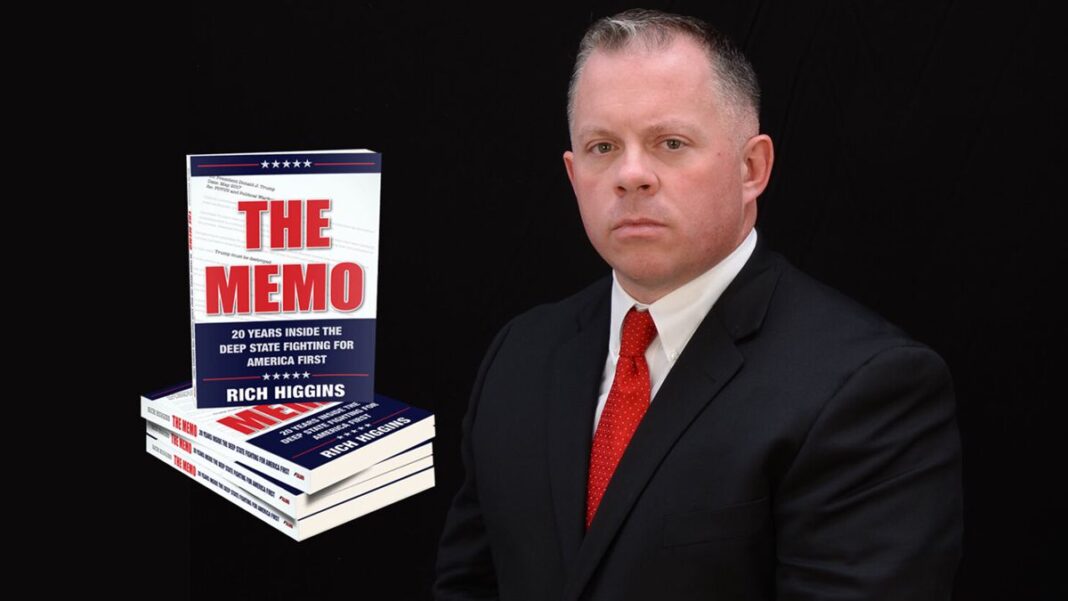 The Memo is the riveting story of how Rich Higgins’ twenty year career inside the Deep State enabled him to discern – well before anyone else – the Deep State’s efforts to stop and ultimately remove the President from office. No one was more bold – or more frighteningly accurate – in anticipating the ferocity of the Deep State’s assault on the Constitution and President Trump.

“Rich Higgins’ The Memo is the book to read for two reasons. Reason One is the showdown between the American people – the “deplorables” in Hillary Clinton’s phrase – and the Washington Establishment of insiders and bureaucrats who believe they, not the American people, have the right to run America. Reason Two is that no matter the result of the 2020 election – the problem Rich Higgins details is not going to go away. If Donald Trump vanished from the face of the earth tomorrow, this problem of who runs America is going to go on. The book is an extremely timely home run. A must-read – and preferably before you vote.” – Jeffrey Lord, author, pundit and former Reagan official

“The Memo is the gut-wrenching story that Trump supporters have waited to hear. From the self-defeating conflicts in the Middle East to the struggle against the “Soft Coup” to remove President Trump from office, Rich Higgins provides a view from the trenches of the ruthless war of deceit and betrayal waged against the Trump Presidency since January 2017.” – Douglas Macgregor, Colonel (ret) U.S. Army, Author of Margin of Victory

He is a US Army veteran and was a key member of the Trump administration’s National Security Council. When at the NSC, he worked tirelessly to brief the President and Senior Executives throughout the DoD and IC.

Rich began with President Trump before his election as one of his foreign policy advisors until his ultimate departure from the NSC.

He has spent 20 years combating terrorism and is an expert on the nexus between theological doctrines and information age unconventional warfare.

Rich Higgins passed away on February 23, 2022. All proceeds from this book, The Memo, goes to help his young family.