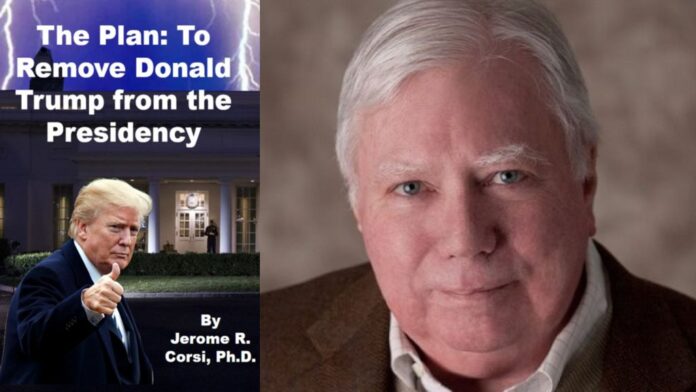 We end by asking the repeat the question we asked a few pages earlier. What does Trump have to lose? Give any human being the opportunity to retire in luxury at Mar-a-Lago and somewhere around 340 million Americans might volunteer to take Trump up on that offer. It’s hard to answer the question why Trump ever wanted to be president. But in the final analysis, I’m just glad he did. Now, I want to see Trump re-elected because life with Trump fulfilling his second-term promise to “Keep America Great” sounds a lot more enticing than the prospect of surrendering control of the White House to the Antifa thugs and the BLM socialist “thought police” Red Guard gangs roving the streets right now in New York City and Washington, D.C.

Many who listen to this ebook will dismiss it as fiction. But a few will recognize that every word written here is true. This may be one of the last books written under the U.S. Constitution and the grant of freedoms were given under the First Amendment, including both freedom of religion and freedom of speech.

In future generations, this book will be suppressed if the forces of darkness succeed with their plan to destroy the United States as we have known it since 1776.

In The Plan to Remove Donald Trump from the Presidency, I am going to lay out the plan in the first chapter. Subsequent chapters will provide supporting evidence for the claims made in the first chapter. I have decided to keep this book short such that it can be read in a few hours. For this reason, much of the supporting documentation will be abbreviated, with some material mentioned only by reference to other published works.

All I ask of you is to listen to this book with an open mind. At worst, you will have the experience of reading a concept for a novel, or a movie. Those who understand will experience fear, especially if it is read by those who have launched the Satanic plan described in these pages. But I vouch that every word I write here will be true and fully verifiable, but most likely only in retrospect – after the events I describe herein have taken place.

I publish The Plan to Remove Donald Trump from the Presidency in the firm belief that we can prevent these events from happening. But a people who have abandoned God will only screech in derision when reading these words, realizing only too late their delusions.

I begin by professing my faith in God. This declaration I found was essential in the fight I waged to refuse the fraudulent plea deal I was pressured to accept by the prosecutors in the Mueller investigation. I refer here to the full description I gave of that nightmare in my 2019 book, Silent No More: How I Became a Political Prisoner of Mueller’s “Witch Hunt”.

I want to thank “Boris” for providing me with extremely valuable information central to the analysis of this book. For those seeking more information about Boris, please consult the webpage “The Boris Files” on my website corsination.com. Boris has agreed to continue being a guest on future Corsi Nation broadcasts. All past Boris interview videos are archived on my “Jerome Corsi” pages on Patreon.com and SubscribeStar.com.

Jerome R. Corsi, Ph.D. is the Founder and CEO of CorsiNation.com.

My next book, to be published in January 2020, is COUP D’ÉTAT: EXPOSING DEEP STATE TREASON AND THE PLAN TO RE-ELECT PRESIDENT TRUMP.

In March 2019, Dr. Corsi published SILENT NO MORE: HOW I BECAME A POLITICAL PRISONER OF MUELLER’S “WITCH HUNT.

His previous New York Times bestselling books, published in March 2018, was KILLING THE DEEP STATE: THE FIGHT TO SAVE PRESIDENT TRUMP.

From 1968-1981, he worked at universities where he conducted research on federally funded grants.

In 1981, he published “Terrorism as a Desperate Game: Fear, Bargaining, and Communication in the Terrorist Event” in Journal of Conflict Resolution, a mathematical game-theoretical model for predicting the outcome of terrorist events. This resulted in a top-secret clearance by the State Department’s Agency for International Development, where he joined a team of psychiatrists and psychologists to develop a hostage-survival training program for State Department officials stationed overseas.

For 25 years, beginning in 1982, Dr. Corsi worked with financial institutions, insurance companies, and mutual funds in the United States and abroad, specializing in the development of third-party marketing firms working with banks to develop retail financial planning services selling annuities and mutual funds to investment and retirement customers.

Working for WND.com for 12 years, starting in 2004, Dr. Corsi obtained press credential to cover the U.S. Congress in Washington, as well as many presidential speeches in events in the second term of President George W. Bush and during the two terms of President Barack Obama. In 2012, the Secret Service cleared Dr. Corsi to fly as “traveling press” on GOP presidential candidate Mitt Romney’s airplane for the last three weeks of the presidential campaign.