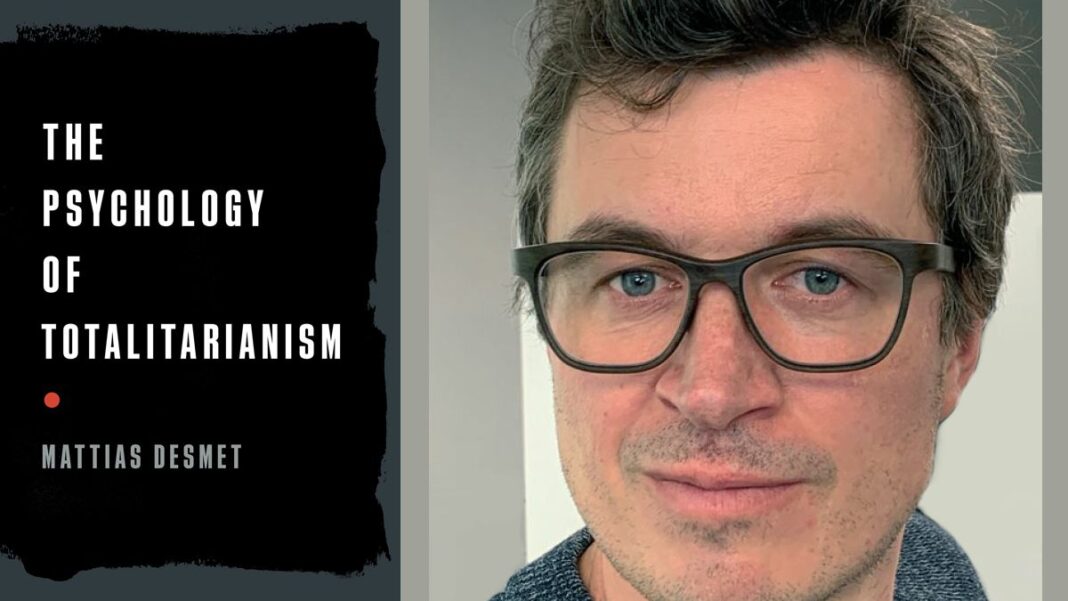 The world is in the grips of mass formation―a dangerous, collective type of hypnosis―as we bear witness to loneliness, free-floating anxiety, and fear giving way to censorship, loss of privacy, and surrendered freedoms. It is all spurred by a singular, focused crisis narrative that forbids dissident views and relies on destructive groupthink.

Desmet’s work on mass formation theory was brought to the world’s attention on The Joe Rogan Experience and in major alternative news outlets around the globe. Read this book to get beyond the sound bites!

Totalitarianism is not a coincidence and does not form in a vacuum. It arises from a collective psychosis that has followed a predictable script throughout history, its formation gaining strength and speed with each generation―from the Jacobins to the Nazis and Stalinists―as technology advances. Governments, mass media, and other mechanized forces use fear, loneliness, and isolation to demoralize populations and exert control, persuading large groups of people to act against their own interests, always with destructive results.

In The Psychology of Totalitarianism, world-renowned Professor of Clinical Psychology Mattias Desmet deconstructs the societal conditions that allow this collective psychosis to take hold. By looking at our current situation and identifying the phenomenon of “mass formation”―a type of collective hypnosis―he clearly illustrates how close we are to surrendering to totalitarian regimes.

With detailed analyses, examples, and results from years of research, Desmet lays out the steps that lead toward mass formation, including:

In addition to clear psychological analysis―and building on Hannah Arendt’s essential work on totalitarianism, The Origins of Totalitarianism―Desmet offers a sharp critique of the cultural “groupthink” that existed prior to the pandemic and advanced during the COVID crisis. He cautions against the dangers of our current societal landscape, media consumption, and reliance on manipulative technologies and then offers simple solutions―both individual and collective―to prevent the willing sacrifice of our freedoms.

“We can honor the right to freedom of expression and the right to self-determination without feeling threatened by each other,” Desmet writes. “But there is a point where we must stop losing ourselves in the crowd to experience meaning and connection. That is the point where the winter of totalitarianism gives way to a spring of life.”

“Desmet has an . . . important take on everything that’s happening in the world right now.”―Aubrey Marcus, podcast host

“[Desmet] is waking a lot of people up to the dangerous place we are now with a brilliant distillation of how we ended up here.”―Robert F. Kennedy, Jr.

“One of the most important books I’ve ever read.”―Ivor Cummins, The Fat Emperor Podcast

“This is an amazing book . . . [Desmet is] one of the true geniuses I’ve spoken to . . . This book has really changed my view on a lot.”―Tucker Carlson, speaking on The Will Cain Podcast

“As I walk through the halls of a major US medical center, I see eyes that divert themselves away from me as I pass. When we engage in our usual discussions on patients, the topic of COVID-19 vaccination brings a halting response: ‘We don’t want to talk about it.’ I see fear, shame, and a never-ending cycle of groupthink that has been more contagious among physicians than aerosolized SARS-CoV-2 in a crowded elevator. Mattias Desmet, like a guided missile, has hit the target. The medical community is in mass formation and this led to a much larger penumbra that has enveloped the general population. In this book, Desmet has constructed an explanatory framework from which the cohesive fabric is suspended that clearly and concisely explains what is happening and what the next steps are that each and every one of us need to take to break the ‘spell’ and restore normalcy. A must read for our time.”
―Peter A. McCullough, MD, MPH; chief medical advisor, Truth for Health Foundation

“Transcending medical controversies, this book offers an indispensable window into the social phenomenon we call COVID.”
―Charles Eisenstein, author of Sacred Economics and The Coronation

“Mattias Desmet is the world’s expert on the phenomenon of mass formation―and one of the most sincere, thoughtful, and important intellectuals of the twenty-first century. If you want to understand why and how the coronavirus pandemic response unfolded the way it did at a societal level and―even more importantly―how to prevent such a travesty from happening again, The Psychology of Totalitarianism is essential reading. Desmet shows us how to reclaim our humanity in an increasingly dehumanized and mechanized world.”
―Dr. Reiner Fuellmich, trial attorney; cofounder, Berlin’s Corona Investigative Committee

“In this masterful book, Desmet asks how we have arrived at the doorstep of totalitarianism. Taking the reader on a wild, scholarly ride through history, science, and psychology, he delivers answers both necessary and unexpected.”
―Heather Heying, PhD, evolutionary biologist; coauthor of A Hunter-Gatherer’s Guide to the 21st Century

“Desmet is waking a lot of people up to the dangerous place we are now with a brilliant distillation of how we ended up here.”
―Robert F. Kennedy, Jr.

“Mattias Desmet’s theory of mass formation is the most important lens through which we can understand the COVID-19 pandemic and the social aberrations that accompanied it. In The Psychology of Totalitarianism, Desmet explains how and why people will willingly give up their freedom, how the masses can give rise to a totalitarian leader, and―most importantly―how we can resist these phenomena and maintain our common humanity. This is the most important book of 2022.”
―Dr. Robert Malone, author of Lies My Gov’t Told Me

“Mattias Desmet’s [theory of mass formation hypnosis] is great. . . . Once I kind of started to look for it, I saw it everywhere.”
―Eric Clapton

“The foundational thinkers on mass formation are joined by Mattias Desmet, who now stands shoulder to shoulder with the likes of Arendt, Jung and Freud. His understanding and analysis of contemporary group behavior in a destabilized society, presents a fascinating window into the minds of the most complex beings on the planet. Desmet’s seminal work underlines the increasingly dangerous behavior of humanity―and that it must be understood and reversed if we are to survive as a species.”
―David Marks, writer and documentary producer

“One of the most important books I’ve ever read.”
―Ivor Cummins, The Fat Emperor Podcast

Mattias Desmet is recognized as the world’s leading expert on the theory of mass formation as it applies to the COVID-19 pandemic. He is a professor of clinical psychology in the Department of Psychology and Educational Sciences at Ghent University (Belgium) and a practicing psychoanalytic psychotherapist. His work has been discussed widely in the media, including on The Joe Rogan Experience and in Forbes, The New York Post, Salon.com, and Fox News, among hundreds of other outlets. His interviews have been viewed by millions of people around the world. His previous books include The Pursuit of Objectivity in Psychology and Lacan’s Logic of Subjectivity: A Walk on the Graph of Desire. Desmet is the author of over one hundred peer-reviewed academic papers. In 2018 he received the Evidence-Based Psychoanalytic Case Study Prize of the Association for Psychoanalytic Psychotherapy, and in 2019 he received the Wim Trijsburg Prize of the Dutch Association of Psychotherapy.