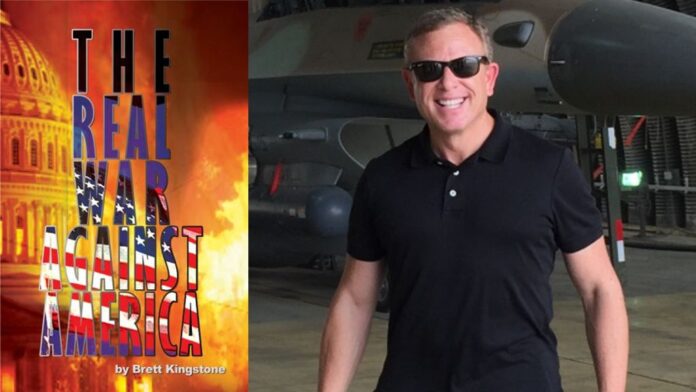 International scandal, undercover private investigators, shredded evidence, intimidation, and theft: all in a day’s work for Brett Kingstone, author of “The Real War Against America.” Kingstone tells the true story of the company he founded, Super Vision International, and its desperate struggle against Chinese counterfeiters who stole designs, equipment and profits.

When Kingstone learned that the market had been flooded with counterfeit Super Vision products, he started to fight back immediately, protecting the business he started as a 19-year-old Stanford student. With little or no help from the local police, the F.B.I. or the U.S. justice department, Super Vision gathered enough evidence to take the criminals to court with the help of private investigators posing as rich Arab sheiks. But the defendants, their lawyers and their bankers went to extremes to cover up their crimes.

In 2002, Super Vision won a $33 million verdict against the intellectual-property thieves, but Kingstone has yet to see a dime. As one expert testified in court, the defendants wired $28.5 million out of the United States before the trial “using methods consistent with money laundering.”

For six years and counting, Brett Kingstone has fought against criminals who many would have simply let get away with what they had done. Kingstone stood up for himself, his company and his country. “The Real War Against America” is a riveting story and an urgent call to arms for every American citizen to fight against terrorists who do not need bullets or bombs to destroy the American dream.

The story of my friend Brett Kingstone tells in The Real War Against America is as good as any spy novel you can pick up….Today intellectual property theft costs American industry an estimated $250 billion a year. And the price tag is rising… The dreams and imaginations of Americans is something worth fighting for. Let s hope we win this battle.

At first, I thought this book was another Tom Clancy techno-thriller, then I realized it was non-fiction — the true story of a dynamic American entrepreneur whose company was under attack by one of China’s largest gang of counterfeiters. If any book about global business today should be made into a movie, The Real War Against America is it.

The story of Brett Kingstone and his company is far more than a high-tech Horatio Alger tale. It is an adventure which should become a case study for every business school candidate to memorize, for here lies a glimpse of the real war and its battles which can be our nation’s demise.

Brett Kingstone started his first fiber optic company in his college dormitory at Stanford University at the age of 19. Super Vision (now Nexxus Lighting, NASDAQ: NEXS) was later established in Orlando, Florida where the first of many fiber optic and LED lighting landmarks worldwide were produced for Coca-Cola, Pepsi, Universal Studios and Walt Disney.

In September of 2002, Mr. Kingstone and his company won the largest jury verdict, $42 million, in the history of the State of Florida for an intellectual property crime. The case against a group of counterfeiters based in Shanghai, China took three years to bring to trial. Mr. Kingstone is a regular lecturer at FBI domain programs on industrial espionage throughout the U.S. and a member of the Orange County Sheriff’s Civilian Review Board. He is also the founder of Max King Realty Ltd., a developer of industrial and commercial properties in Orlando, Florida where he continues to serve as President.