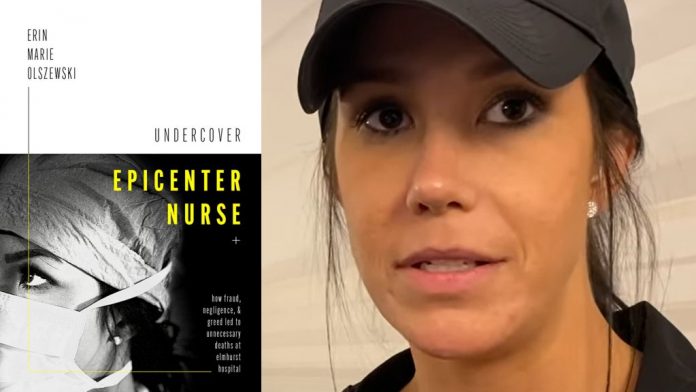 The Undercover Epicenter Nurse blows the lid off the COVID-19 pandemic.

Nurse-turned-investigative journalist-Erin Marie Olszewski has been on the inside in two radically different settings during the first months of the pandemic. Two hospitals. One private, the other public. One in Florida, the other in New York.

And not just any New York public hospital, but the “epicenter of the epicenter” itself, the infamous Elmhurst in Queens. As a result of these diametrically opposed experiences, she has the ultimate “perspective on the pandemic.” She has been where there have been the most deaths attributed to COVID-19 and where there have been the least. Some shocking revelations that you will learn:

Much of which points to what may be the real reason black and brown Americans seem to be disproportionately affected by COVID-19. They are likely not dying because of some alleged genetic predisposition or a peculiar array of Covi-combustible comorbidities. But they are certainly dying from an underlying condition: a defunded, criminally negligent, and corrupt hospital system, which during this crisis seems to take extra pains to do them in, and which may be financially incentivized to do so.

Experimented on by unsupervised doctors-in-training, misdiagnosed, and rushed onto ventilators based on edicts from anonymous supervisors, Elmhurst and other public hospital patients have not stood a chance. And yet, confirmed by a new study from Yale, hydroxychloroquine and zinc and/or other therapies have been shown to work, especially when given early to those few people who actually develop symptoms of COVID-19.

The Undercover Epicenter Nurse provides a shocking and infuriating inside look at the negligence and malfeasance behind the tragic deaths of unsuspecting COVID-19 patients.

Nurse Erin Marie Olszewski has answered the call of duty many times in her life, putting her safety at risk in acts of patriotism and service. At age seventeen, Erin enlisted in the Army and deployed in support of Operation Iraqi Freedom. While in country, she received the Army Commendation Medal for meritorious service. She was combat injured. Erin eventually exited service as a sergeant and became a civilian nurse in 2012.

Erin answered the call of duty again in 2020 by putting her safety at risk during the COVID-19 crisis. This mother of three and patient advocate volunteered again for service, leaving her home, family, and hospital position to offer her professional nursing skills to help in NYC, the epicenter of the pandemic in the US. She was assigned to Elmhurst Hospital, the epicenter of the epicenter. Now, she is reporting on what happened inside Elmhurst Hospital, putting herself and her career in jeopardy.