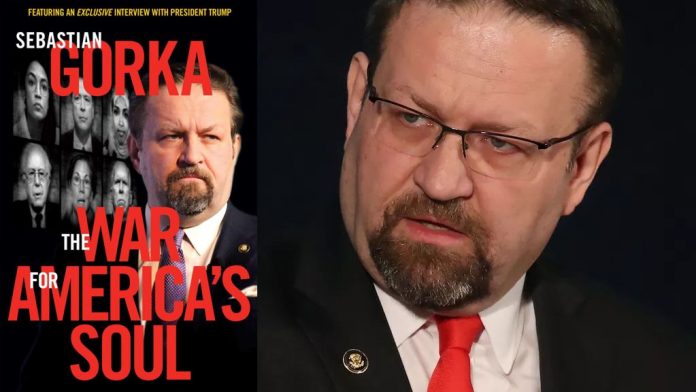 “Take it from someone who has been on the inside, who understands the fight we are currently in, and who knows what must be done to save our country. Dr. Sebastian Gorka’s latest book, The War for America’s Soul, leverages the former White House strategist’s expertise, driven by his determination to preserve what made America great in the first place.” — MARK LEVIN

Our country is at war with itself.

On one side are American patriots, dedicated to freedom under the Constitution; on the other side are leftists campaigning not just to win elections, but to radically transform the nation. In this political war for the soul of our country, America’s patriots need a strategist with a blueprint for victory.

Luckily, we have such a man in Dr. Sebastian Gorka—a former strategist for President Trump and now a nationally syndicated radio host and a fearless culture warrior.

In his essential new book, The War for America’s Soul, Dr. Gorka shows how America’s elite—in both parties—betrayed our heartland, sabotaged the American dream, and accepted national decline as inevitable. It took a candidate with remarkable vision, dauntless courage, and unbreakable determination to change the narrative. That man was Donald Trump. A candidate who owed no favors to special interests, Trump articulated a new American nationalism that has been an extraordinary force for economic and political renewal.

Now, however, the Left is redoubling its efforts to defeat him. The leftists see him, rightly, as the great nemesis to their radical project.

“Sebastian Gorka is a force of reason, a force of nature, and a force for American freedom. Dr. Gorka doesn’t just talk the talk, he walks the walk—from the radio microphone to the Rose Garden. The War for America’s Soul is a patriot’s action guide to battling the Trump-hating radical Left, Beltway elites, and media saboteurs. Get off the sidelines and get on the frontlines. Buy this book!” — MICHELLE MALKIN, bestselling author of Open Borders, Inc.

“Take it from someone who has been on the inside, who understands the fight we are currently in, and who knows what must be done to save our country. Dr. Sebastian Gorka’s latest book, The War for America’s Soul, leverages the former White House strategist’s expertise, driven by his determination to preserve what made America great in the first place.” — MARK LEVIN, bestselling author and radio host

“2020 is a choice between socialism and liberty. Sebastian Gorka understands the true threat and what my father is doing to stop those who wish to subvert America. Read The War for America’s Soul if you want to help save our Republic.” — Donald Trump Jr.

“America is under attack from the inside by those who wish to destroy the nation our Founders gifted us. Sebastian Gorka is a fighter who knows the stakes and the seriousness of our predicament as a nation. Read The War for America’s Soul if you love America and want to help.” — JUDGE JEANINE PIRRO

“Sebastian Gorka is one of the clearest, most consistent, and most eloquent defenders and explainers of the Trump phenomenon—and he has played that role with courage and good humor despite being vilified and slandered by the Left. Here, he uses that experience to throw light on the current battle for our culture and delivers a work of insight and encouragement for everyone who wants to see America rediscover its founding ideals.” — ANDREW KLAVAN

“In this spirited defense of the Trump presidency, administration veteran Sebastian Gorka connects the illegitimate progressive efforts to abort the Trump presidency to a larger and multifaceted elite project of transforming America into something that the Founders never intended and most Americans simply do not want. Gorka will have none of it—and he offers a lively invitation to join him in saying NO.” — VICTOR DAVIS HANSON

Sebastian Gorka, Ph.D., is the nationally syndicated radio host of “America First with Sebastian Gorka. He’s also a bestselling author and one of America’s most trusted authorities on national security, strategy, and counterterrorism. A former Deputy Assistant to President Trump for strategy, he has lectured for US Special Operations Command, the FBI’s Counterterrorism Division, and the Green Berets, and he has briefed the CIA, the Defense Intelligence Agency, and the National Intelligence Council. His previous books are Defeating Jihad: The Winnable War (2016) and Why We Fight: Defeating America’s Enemies—With No Apologies (2018). He lives in McLean, VA.