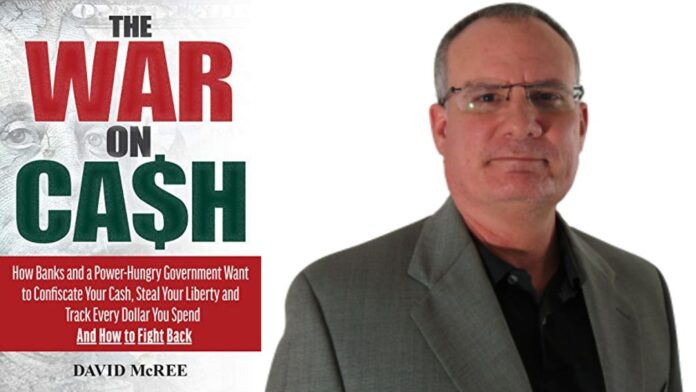 The War on Cash: How Banks and a Power-Hungry Government Want to Confiscate Your Cash, Steal Your Liberty and Track Every Dollar You Spend. And How to Fight Back is a wake-up call to every one about the tactics being used by governments to restrict the public’s use of cash and to abuse the laws for its own purposes.

Powerful forces are threatening your financial freedom. All over the world, including in the United States of America, governments, certain academics, banks and non-governmental organizations (nonprofits) are working in a coordinated way to stop you from using cash.

The War on Cash is a shocking look into the banks and power-hungry government plans to confiscate your cash, steal your liberty, and track every dollar you spend. AND HOW TO FIGHT BACK!

David McRee (St Petersburg, FL) is a Certified Public Accountant with a specialized practice advising small tax-exempt organizations, particularly in the area of IRS penalty abatement. David is happy to have kept more than one million dollars in fines and penalties out of the hands of the IRS and in the hands of small charities where it belongs. He is a strong supporter of individual liberty, independence, entrepreneurship, free-market capitalism, and family and runs Nonprofit Tax Help. The author lives and works in the Tampa metro area.

The War on Cash

Money can take many forms. It could be gold or silver, paper or shells. Even stolen Tide laundry detergent is being used as money in some of the inner city black markets, mostly to use in payment for drugs [1.1]. Honeybuns are used as money in some prisons [1.2]. For the most part, today’s money is in the form of checks and check cards, credit (debt), and various forms of electronic currency transfers. Cash is nothing more than the physical manifestation of money.

If a check is lost in the mail, it can be replaced and nothing is lost. If a $100 bill gets lost in the mail, it is simply gone. That’s the risk and the beauty of cash: it’s anonymous. It’s largely untraceable in its current form. Cash is always considered money, but money takes many forms other than cash.

Bitcoin is a new form of money that many people are excited about, but it is not cash.

How much money is there in the United States, and how much of it is physical cash? According to the Federal Reserve, “There was approximately $1.70 trillion in circulation as of January 31, 2019. This figure includes Federal Reserve notes ($1,655.2 billion), U.S. notes ($0.2 billion), currency no longer issued ($0.2 billion), and coins outstanding ($47.2 billion)” [1.3]. The key here is “in circulation.” Currency in circulation refers to U.S. coins and paper currency in the hands of the public. That means it’s not in the bank: it’s in your wallet, in a cash register, under your mattress, or buried in your back yard.

According to the New York Federal Reserve Board’s web site: “… as much as two-thirds of U.S. currency in circulation may be held outside the United States….” But even though it is not present in the country, it is still counted in the money supply, because it can be spent on goods and services in the U.S. economy [1.4.]. Here’s another interesting fact: the most popular denomination of Federal Reserve note outside of the United States is the $100 bill. That’s right. There are more $100 bills outside the U.S. than inside. But then you probably already knew that just by looking in your wallet. Many of those foreign-located $100 bills are held by central banks, drug cartels, and perhaps oil sheiks.

Although it’s easy to learn how much cash is in circulation, it’s not as easy to figure out how much money in U.S. dollars exists in the world. It’s like trying to answer the question: “How many doves are resting on tree branches in the world right now?” It’s unanswerable. Various sources put the number around $10 trillion. And, also according to “various sources,” about 90 percent of that $10 trillion is electronic money. In other words, it’s not cash and never will be turned into cash. You can’t see it or touch it. It exists only as digital bits on a computer in a central bank, created by monetary magic possessed only by the bank.