These days many Americans tend to prefer a “refined” or “sophisticated” leader rather than someone who is isn’t afraid to tell the people the truth to their faces, no matter how ugly that truth might be. Well, it often happens that the “sophisticated” types rarely get anything done. Enter people like Donald Trump, however, and things start happening. Another example of such a leader is Oliver Cromwell.

Oliver Cromwell (1599-1658) was a great English patriot and statesman. His name is perhaps not familiar to most Americans; so to become better acquainted with his story, the 1970 movie Cromwell (starring Richard Harris and Alec Guinness)is highly recommended. At first glance the tale might appear only as dusty, forgotten, old English history that it doesn’t mean a thing anymore. Actually, this film’s portrayal of the leadership of Oliver Cromwell has striking lessons for even Americans today.

In England during the 1600s, Parliament clashed with the tyrannical King Charles I. This sparked a civil war between the king’s men (the Cavaliers), and the Parliamentary army (the Roundheads) headed by Cromwell. The war eventually ended with the beheading of Charles I, and later, Cromwell’s becoming Lord Protector of England, until his death in 1658.

As the film demonstrates, even good governments eventually mold into tyranny, and the ordinary people become controlled by elites. When tyranny begins to take over, it is the right of the people to alter or abolish such government and to institute new government (as stated in the Declaration of Independence). In the movie, Cromwell points out that “it is the difference between being asked and being told” that makes a nation’s government what it is and a people who they are. Currently, we Americans are being told to do so much, and asked so little.

The film also shows we should choose leaders who cannot be swayed by popular opinion. In the movie, Cromwell was offered 40,000£—merely to spare Charles I from his death sentence. Cromwell’s disgusted reply was “How little you know me that you think you can buy my principles.” A simple answer, yes. But how many politicians today—local, state, and national—would as decidedly answer in that way? How many politicians daily (and willingly) allow their principles to be bought? The statistics would be shocking, to say the least. Too many politicians are doing what is easy, popular, and rewarding.

A third point from the movie is, as Cromwell realized, that individuals in positions of power need to understand that they are not above the law themselves. This is most emphasized by what Cromwell told those hesitating to impose the death sentence on Charles I: “England is not the king! The king is not England!” As Americans, we must remember that the United States is not the president, and that the president is not the United States.

To summarize, the drama of Cromwell should not be lost on us as Americans. Similar to the situation in the movie, our country is experiencing a turbulent time and tolerating a tyrannical form of government. We American citizens are taking part in this drama whether we like it or not. What we say, what we stand up for, and how we act during this crisis is important. So with the midterm elections approaching, we need to cast our votes for strong, decisive, candidates with good character who will provide us with the leadership so sorely needed today in our nation. 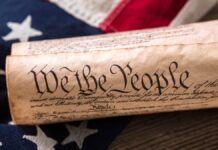