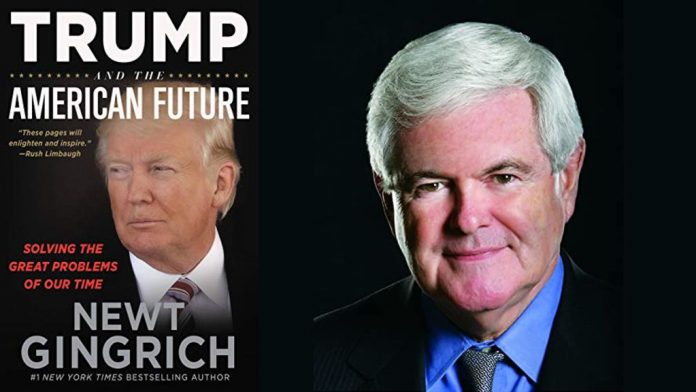 Trump and the American Future is an insightful call to action, New York Times bestselling author Newt Gingrich explains what is at stake in the 2020 elections — and why Donald Trump must be re-elected.

The 2020 election will be a decisive choice for America, especially as we emerge from the coronavirus crisis. Will the American people choose four more years of President Trump to lead us back to strong economic growth, a foreign and trade policy of putting American interests first, dismantling the deep state, and dramatically reforming the bureaucracies? Or will they reject Trumpism and elect the radical Democratic policies of big government, globalism, and socialist policies that Joe Biden represents? Not since the election of 1964 has the choice in an election been so stark.

Trump and the American Future by Newt Gingrich will lay out the stakes of the 2020 election and provide a clarion call for all Americans on why it is vital to return President Trump to the White House for a second term. Featuring insights gleaned from the lifetime of experience and access only Newt Gingrich can bring, Trump and the American Future will be crucial reading for every citizen who wants to continue to make America great again.

Praise for Trump’s America “Newt Gingrich yet again shows that he truly understands my father, his historic victory, and his incredible presidency. A must read!”–Eric Trump

“This book is essential to understanding the genuine importance of this the upcoming elections. It matters!”
—Rush Limbaugh

Newt Gingrich is a former Speaker of the House and 2012 presidential candidate. He is a Fox News contributor and author of thirty-six books, including fifteen New York Times bestsellers. Through Gingrich Productions, he has also produced and hosted documentary films. Recent films include The First American and Nine Days that Changed the World.