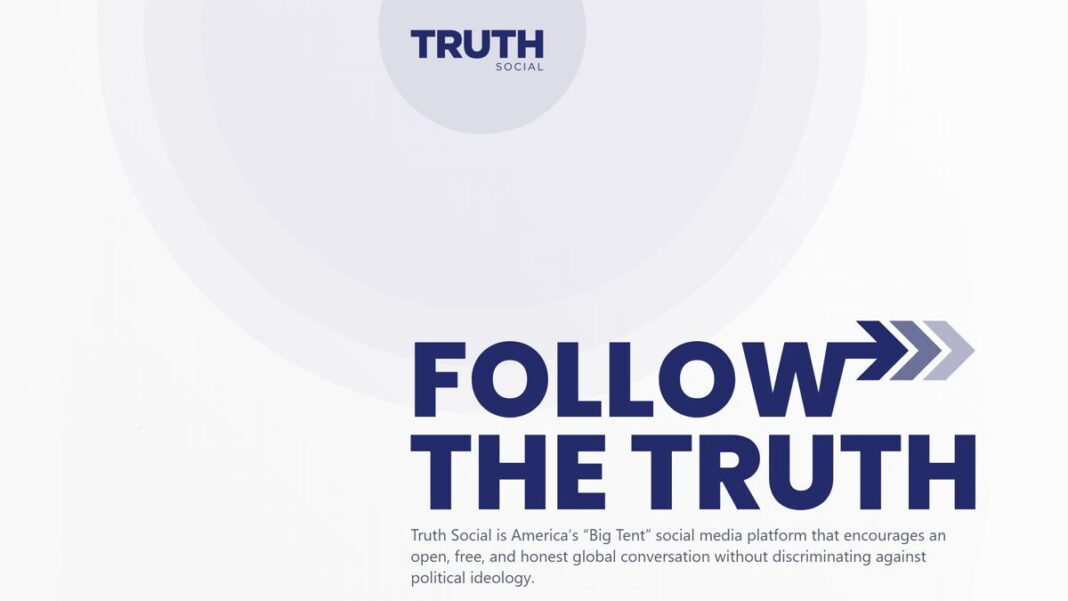 “I created TRUTH Social and TMTG to stand up to the tyranny of Big Tech. ~ President Donald Trump

Former President Donald Trump on Oct. 20 unveiled the upcoming launch of his own social media platform.

The beta version of the app, called TRUTH Social, will be available to invited guests in November, according to a statement from the Trump Media & Technology Group (TMTG). A nationwide debut is expected to follow in the first quarter of 2022.

“I created TRUTH Social and TMTG to stand up to the tyranny of Big Tech,” Trump said in a statement released by TMTG. “We live in a world where the Taliban has a huge presence on Twitter, yet your favorite American President has been silenced. This is unacceptable. I am excited to send out my first TRUTH on TRUTH Social very soon.”

The announcement was timed together with a merger announcement between Digital World Acquisition Corp. and TMTG, which will allow TMTG to become a publicly listed company with a cumulative valuation of $1.7 billion.

According to a company news release, TMTG’s “mission is to create a rival to the liberal media consortium and fight against the ‘Big Tech’ companies of Silicon Valley, which have used their unilateral power to silence opposing voices in America.”

Donald Trump Jr. posted a link to TRUTH Social on Twitter. The website currently features a waiting list sign up for and a link to the Apple App Store where the app can be preordered for free.

“What we’re trying to do is create a big tent, an open and free network for people to be able to communicate, to exercise your First Amendment rights.”

The former president’s son said Trump signed the former merger agreement on the night of Oct. 20.

According to Bloomberg, Digital World Acquisition Corp. is a blank-check company created for the purpose of acquiring one or more companies.

Trump Media & Technology Group’s mission is to create a rival to the liberal media consortium and fight back against the “Big Tech” companies of Silicon Valley, which have used their unilateral power to silence opposing voices in America.

Trump Media & Technology Group (“TMTG”) will soon be launching a social network, named “TRUTH Social.” TRUTH Social is now available for Pre-Order in the Apple App store. TRUTH Social plans to begin its Beta Launch for invited guests in November 2021. A nationwide rollout is expected in the first quarter of 2022. Those who are interested in joining TRUTH Social may now visit www.truthsocial.com to sign up for the invite list.

President Donald J. Trump, the Chairman of TMTG, stated, “I created TRUTH Social and TMTG to stand up to the tyranny of Big Tech. We live in a world where the Taliban has a huge presence on Twitter, yet your favorite American President has been silenced. This is unacceptable. I am excited to send out my first TRUTH on TRUTH Social very soon. TMTG was founded with a mission to give a voice to all. I’m excited to soon begin sharing my thoughts on TRUTH Social and to fight back against Big Tech. Everyone asks me why doesn’t someone stand up to Big Tech? Well, we will be soon!

Patrick E Orlando, Chairman/CEO of DWAC, stated, “Digital World was formed to create public shareholder value and we believe that TMTG is one of the most promising business combination partners to fulfill that purpose. DWAC currently has $293 Million in trust, assuming minimal redemptions, which can fuel TMTG’s scale up, including to provide world class leading technology services to build strong and secure social networks and diverse media offerings. Given the total addressable market and President Trump’s large following, we believe the TMTG opportunity has the potential to create significant shareholder value.”

Additionally, TMTG intends to launch a subscription video on demand service (TMTG+). TMTG+ will feature ‘non-woke’ entertainment programming, news, podcasts, and more. TMTG has named Scott St. John as the leader of TMTG+ Corporate Operations. Scott St. John is the Executive Producer of “Deal or No Deal’ and “America’s Got Talent” and has produced over 1,000 hours of Network and Cable TV.

Please visit TMTG’s corporate website at www.tmtgcorp.com for a Company Overview, and a video tour of TRUTH Social.

The transaction is subject to approval by stockholders of DWAC and TMTG and other customary closing conditions, including any applicable regulatory approvals. Additional information about the transaction will be provided in a Current Report on Form 8-K to be filed with the Securities and Exchange Commission (“SEC”) and available at www.sec.gov. In addition, the Company intends to file a registration statement on Form S-4 with the SEC (the “Registration Statement”), which will include a proxy statement/prospectus of DWAC, and will file other documents regarding the proposed business combination with the SEC.

EF Hutton is acting as sole financial and capital markets advisor to DWAC.

Additional Information and Where to Find It

Participants in the Solicitation

DWAC, TMTG and their respective directors, executive officers, other members of management and employees may be deemed participants in the solicitation of proxies from the Company’s stockholders with respect to the proposed business combination. Investors and securityholders may obtain more detailed information regarding the names and interests in the business combination of the Company’s directors and officers in the Company’s filings with the SEC, including the Registration Statement, and such information with respect to TMTG’s directors and executive officers will also be included in the Registration Statement.

No Offer or Solicitation

This press release shall not constitute a solicitation of a proxy, consent, or authorization with respect to any securities or in respect of the proposed business combination.

This press release shall also not constitute an offer to sell or the solicitation of an offer to buy any securities, nor shall there be any sale of securities in any states or jurisdictions in which such offer, solicitation, or sale would be unlawful prior to registration or qualification under the securities laws of any such jurisdiction. No offering of securities shall be made except by means of a prospectus meeting the requirements of Section 10 of the Securities Act of 1933, as amended, or an exemption therefrom.