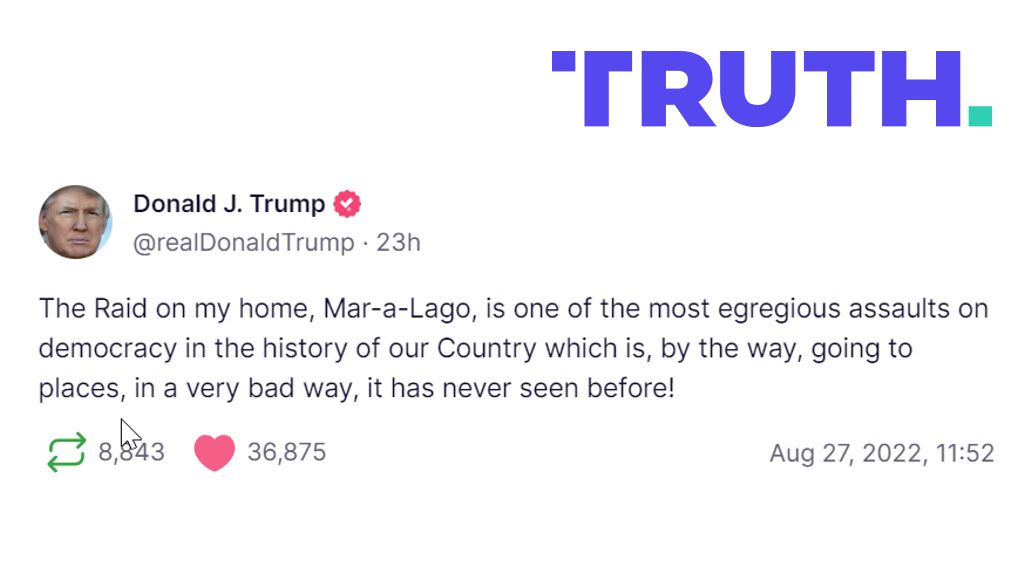 Former President Donald Trump accused the FBI and Department of Justice of engaging in political interference ahead of the 2022 midterm elections and possibly even the 2024 presidential contest.

In a statement released Saturday night on Truth Social, the former president wrote that the Aug. 8 raid of his Mar-a-Lago property was “done for political purposes just prior to the Midterm Elections (and 2024, of course!). It is a disgrace to our now Third World Nation!”

“The Raid on my home, Mar-a-Lago, is one of the most egregious assaults on democracy in the history of our Country which is, by the way, going to places, in a very bad way,” Trump also wrote Saturday.

The posts were made in the context of a federal judge in Florida being assigned to Trump’s recent legal complaint that seeks to have a special master appointed to review documents and materials that were taken by FBI agents during the raid.

Aileen M. Cannon, U.S. district judge for the Southern District of Florida, said that she decided to give Trump a chance to make his case after reviewing Trump’s submissions and the “exceptional circumstances presented.”

“Pursuant to Rule 53(b) (1) of the Federal Rules of Civil Procedure and the Court’s inherent authority, and without prejudice to the parties’ objections, the Court hereby provides notice of its preliminary intent to appoint a special master in this case,” Cannon, a Trump appointee, wrote in a Saturday afternoon filing.

Trump’s lawyers, meanwhile, filed another complaint on Friday that notes the DOJ’s affidavit—released by a judge with significant portions redacted—provided the public with “almost no information that would allow Movant to understand why the raid took place, or what was taken from his home.”

A hearing will take place on Sept. 1 at 1 p.m. in West Palm Beach in Florida in the case, while the DOJ has to file a response to Trump’s recent request by Aug. 30.