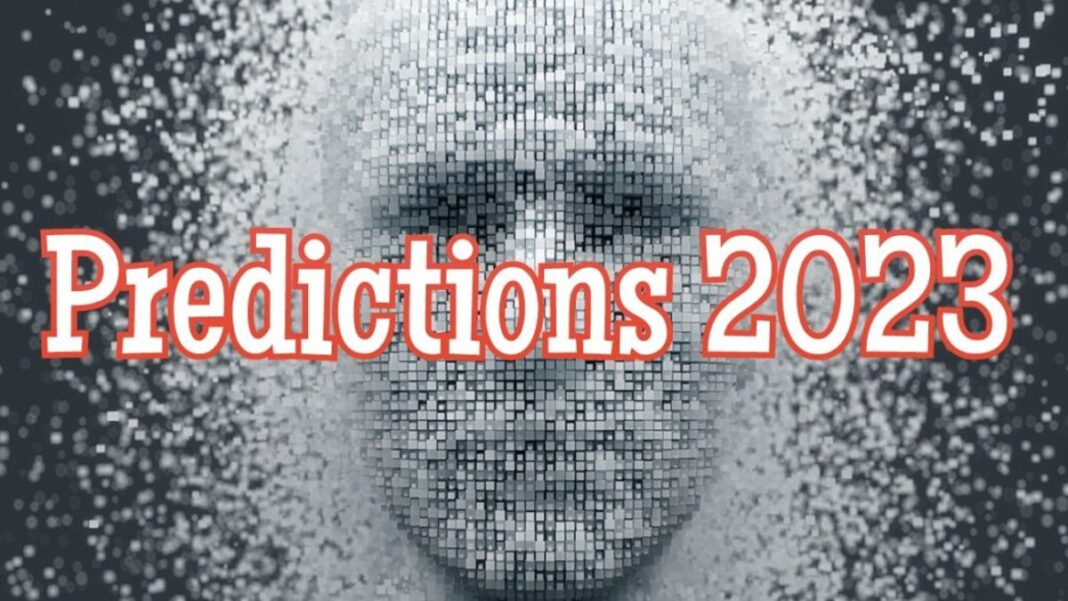 The Right Wire Report presents the Truth Be Told Podcast with Bekah Lyons. The Truth Be Told Podcast discusses the important political and cultural issues of the week and provides analysis that will give a different perspective and how these stories will affect us all in the near future. Now, wake up and start acting. The topical notes for this December 31, 2022, “Predictions 2023” episode include:

The need for elites to control movement:

If this power reversal comes to fruition, the world will witness a second Nuremberg-modeled World Court convening on Crimes Against Humanity. If the majority continue to capitulate to authoritarian regimes, it will usher in decades of global slavery to the state and loss of both the sovereign human and country.”
Well, we now know who won round 1, authoritarian regimes have been installed, and freedoms and human rights are rapidly being oppressed.

Now comes the high rates of disease and death. The phrase “people are dropping like flies” will have a poignant meaning for far too many in 2023. There will be an overall increase in Western countries of sudden death from no known disease process by 15-18% between the ages of birth to 45 and an increase of 12-15% in miscarriages and stillborns. These numbers will rise as more boosters are given, and immunity wanes. Autoimmune illness, cancer rates, and vascular incidents will continue to rise. “The walking wounded” will become the norm as long-term vax injury or long covid will become evident.

There will be increased censorship of the above stats, and the WHO pandemic peace treaty will become, in some form, legislated law in Western countries. This will start in 2023 and will, in a few tears, link all of our health regulations and services under one universal global body.

The need for elites to control communication:

Food costs will increase by as much as 25% more, and gas will dip to $ 3 80 -ish until Mid Q2 when it climbs back up to hover around 4.25 a gallon. Gold will hit 2300 by year’s end, and Crypto will continue downward. The stock market has not found its floor, and a combo of crumbling economic pilings and unforeseen events will result in a brief free-fall dipping down to 19k territory and then stabilizing around 27k. Those bullish on bonds may be shocked after a modest increase by the end of 2023, and bonds will be back down below the current rate.

In real estate, with interest rates going up while economic activity plummets, the property value will follow. Expect another 26%, possibly as high as 30% off the high, by the end of Q2. Mortgage interest rates will continue to climb between 7.5%-9% for a 30 yr fixed and, by the end of 2023, will be hovering around 10%. The real estate market will remain depressed throughout 2023 and will not rebound.

This is the year the dollar gets dethroned or watered down to the same effect. OPEC+  and Chindia walk out of the IMF, agree to trade with new reserve asset.” BRICS expands, and a parallel currency takes hold.

Global Governments and US will try to force stimulus early around March, but there will be no political appetite to do so. However, by Q4, the economy will be in such a collapse that stimulus will pass but be totally ineffective. Inflation will continue into 2024. Some countries will implement price controls to cap official inflation.

The traditional 60/40 allocation investment portfolio is no longer relevant. Why? Because of the dynamics of supply and demand, hyper-financialization, hyper-globalization, and low-cost, abundant energy – are no longer drivers. Prepare to lose another 25% in addition to what was lost in 2022 of your investment value. I don’t give financial advice, but if there were any year you should pay a qualified financial expert to navigate – it would be this one. I will advise you to get more liquid and pay off as much or all debt now. Prep to be as self-sufficient ( 12 months at least) as possible for your circumstances. And shore up your support systems and build relationships locally, including Sheriffs/US Marshals.

However, expanding the money supply will only make the rich richer and the poor poorer. The average middle-class person is set to lose as much as 50% of their wealth through this hyperinflationary process. Get ready for your $5,000 stimulus payment to be paid out under various mechanisms and conditions.

CBDCs and Digital IDs rollout (Tom) – As part of a CBDCs and a Digital ID rollout, which is currently scheduled to be rolled out by 2025 in many countries, many of the implementations will be sped up in 2023. The government stimulus payments mentioned before will come in the form of CBDCs, with your Digital ID, and will come with a “kill switch” to ensure you conform to correct behavior. These will be required in order to receive any government economic stimulus – learn more here.

Continuing with the theme of controlling the movement of people, the Digital ID will be required for entry into many areas – private and public. Here is one example of potential use at a grocery store to protect the store and customers from the crime wave that has reached pandemic levels. The point is that CBDCs and Digital IDs will have an accelerated rollout in 2023 and be cheered on by the people because of perceived protections and to gain privilege.

Putin will not voluntarily leave office. He leaves only by natural death or unnatural death. If either happens, the vacuum will be filled with a far more dangerous faction whose leader would not hesitate to wipe Ukraine off the map, nuclear or otherwise. And would seek revenge on European and United States through cyber attacks or EMP or worse.

Putin leaves office in Russia (Tom) – this may come from a health or more nefarious means. The West will cheer his demise and try to replace Putin with a pro-Western puppet with little success. Russia descends into factional areas where oligarchs and generals control different regions of Russia. The control of Russia’s 6000+ nukes becomes highly problematic – with a potential regional nuclear event occurring. This will cause Europe to begin to re-arm – a dream long sought after. The West will use this event to accelerate their moves to restrict the populous’ freedoms of movement and communication. In any case, we are looking at war without end in eastern Europe, where the global military-industrial complex will make fortunes. The Doomsday clock advances to 50 seconds before midnight from 100 seconds today.

China (Bekah) – India border conflicts continue; both possess the nuclear capability, so powder keg. BRICS may help keep that fuse from being lit. Concerning Taiwan: China takes it. No need for full-on military action as Biden’s regime leaves Taiwan hanging, and they will negotiate a Hong Kong-like deal to survive.

The last Pope? (Bekah) – In 2023 will see the new and last Pope. This Pope will seek to unite Christians, Muslims, Jews, Orthodox, and others under a new global religion which will create a fracturing within Christianity, eventually leading to a religious war of wars in the years that follow if this new Pope succeeds at his goal.

Assassinations (Tom) – could erupt as the tool of choice by activists looking to get violent. Besides, free speech is all but gone, and hence this tactic is inevitable. A mix of old and new technologies will be used. Targets hit will be major influencers (and some minor softer targets) in entertainment, academia, politics, and business. Here is just one example (Elon Musk) of an elite beginning to understand this phenomenon.

Perpetrators could come from all sides of the political spectrum, various actors, and even dark or rouge elements of governments. It becomes part of a new modern warfare, where those who even try to poke their head above water to make a difference could suffer. See here (Andrew Tate) what happens when one goes against the desired narrative (the three lives: canceled, arrested, and then killed).

Driven by the insanity of the culture wars, crime continues to rise sharply in major metropolitan areas, sparking continued migration of those trying to escape the carnage to the countryside.

Biden packs the court, and the filibuster ends (Tom) – the health of Biden is in great question, but with modern medicine, he lives on, though he will not run in 2024 for the US presidency. However, he has a gift for America. He will move to pack SCOTUS with an additional four justices. The Senate will remove the filibuster rule to ensure all the political changes of the elites can be implemented.

No matter what Trump does, there will be a third-party ticket in the 2024 race, with most likely Tusli Gabbard and Joe Manchin. Joe Manchin announces he is leaving the Democrat party and will become an independent. Kamala Harris will resign by the end of 2023, and the front-runner for 2024 will be named VP and assume the presidency once Biden exits in 2024.

The Democrat party move to kill the filibuster and implement the defacto end to the electoral college. In an end-run amendment, they will expand election commission powers and such – see here.

Supreme Court will strike down Grutter v. Bollinger ending affirmative action as we know it in 2023. But Universities will find a way around this to promote equity and diversity dogma and continue the discrimination.

McCarthy loses the speaker role in favor of a compromise Democrat-Republican establishment candidate. Through resignations and scandal, Democrats take back the House.

New virus pandemic (Tom) – no, not another human covid-19 as we just experienced. This time it will infect animals or perhaps plants – see here a prelude to this event. Like covid-19, it was engineered in the laboratory as a bio-weapon. The virus will threaten the global food supply. Human lockdowns may still be in order at regional levels to ensure humans do not spread the virus further via their movements.

Billions of dollars of new investment commitments will be announced to build chip manufacturing facilities in the United States as the US makes contingency plans for Taiwan. Artificial intelligence, like human intelligence, depends upon both software and hardware. Certain types of advanced semiconductors are essential to power modern AI. Quantum encryption will become a reality.

Monopolies grow (Tom) – with additional M&A activity that will further squeeze small to mid-range companies. This will have the effect of reducing GDP growth, productivity, and innovation, adding to the growing stagnant economy. The military-industrial complex and pharma biotech gain market dominance.

Elon Musk (Tom) – and other right-leaning independent business leaders will be purged from the business environment, where they and their businesses will suffer accordingly.

Life extension drugs invented (Tom) – have we found the fountain of youth? A new breakthrough science that could extend lives by 10-20% will be announced. Indeed, a pharmaceutical money train, as the cost of these new drugs will be initially cost prohibitive for most – only the top 20-30% of our social-economic classes. Later available to all – as people scramble to get these new drugs. However, like covid vaccines, rumors will abound that, in fact, they may yet be another bio-weapon of some sort. The life-extension drugs were initially placebos. Later versions of the drugs given to the masses contain a mechanism to eliminate the unproductive or even racial classes.

A devastating solar storm, increase activity within the ring of fire, and more intense earthquake activity. Acoustic earthquake shields are to be developed to protect cities from earthquakes.